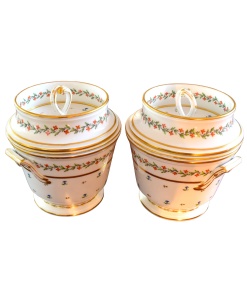 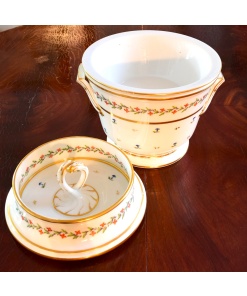 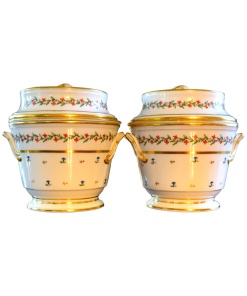 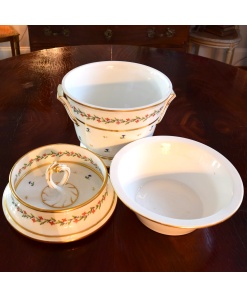 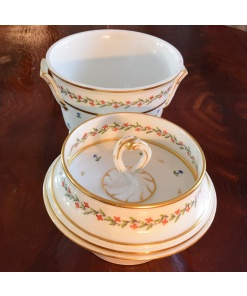 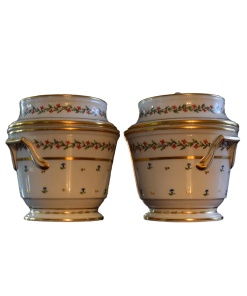 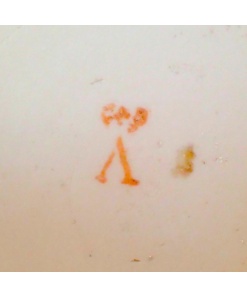 A Gorgeous and Majestic Pair of covered iceboxes with their lining in porcelain with polychrome decoration of cornflowers and garlands of flowers, by The Manufacture de la Reine Marie Antoinette in Paris.

Allow us to stray for once from Silver while remaining in our category of the Art of The Table in France.
This incredible set of Covered Iceboxes is complete and quite incredible.
These utensils were created towards the first part of the 18th century to present Cold meals or Ice Creams on the table.
The ice creams were then sublimated at the table by the presentation in an appropriate crockery. The ice cream cooler or Glacière which is composed of 3 parts: the container, the liner and the lid.
Once out of the cooler, the ice dessert is poured into the liner, which is placed in the container where it rests on the rim without reaching the bottom which is filled with crushed ice. The lid, which is concave, receives another helping of ice, thus enabling the dessert to remain perfectly cool and maintained at temperature, until service.

After the movement launched during the Grand Siècle by the will of Louis XIV and Colbert, the luxury industry continued to develop during the 18th century, particularly in Paris.
If the 17th century had been the one of royal factories and installations, shaking up the pattern established by the different corporations, its successor sees the appearance of small factories but with a lot of know-how. A kind of entrepreneurship is launched!
The manufacture of hard porcelain is totally in line with this logic. At this time, the jealously guarded secret of the Chinese is finally broken. It was then realized that hard porcelain owed its characteristics to the use of kaolin, and the discovery of the first mine of Kaolin near Limoges, cemented the process. After the Meissen factory, in Saxony, which had been the pioneer, the Paris region saw the arrival of this industry, first in Vincennes, then in Sèvres.
Under the reign of Louis XVI, private initiatives were launched to produce porcelain near Paris.
In order to promote them, but also probably to protect themselves from corporations jealous of their privileges, the owners called upon the sponsorship of powerful people.
The Manufacture de la Rue Thiroux went to seek the most powerful of the godmothers: Marie Antoinette! Hence becoming known as La Manufacture de la Reine Marie Antoinette.
It is in the second half of the 1770s that André Marie Leboeuf embarked on a new adventure: the porcelain factory.
According to different sources, we find as starting dates: 1775, 1777, 1778…
In any case, he established himself rue Thiroux, in a new district that was developing at the time: the Chaussée d’Antin. Located between the rue des Mathurins and the rue de Provence.
It would merge with the rue de Caumartin in the middle of the 19th century.
One could read in the literary Year of 1778 (volume VIII, page 141), that the manufacture was located “first street on the right in the street of Mathurins, while entering by the Chaussée d’Antin”.
At this time, Leboeuf had to compete with another ‘manufacture’ which developed in parallel, that of Clignancourt, which had acquired Monsieur, Brother of the King, as its godfather.
The skill shown in the pieces produced by of André Marie Leboeuf allowed him to attract the attention of the Marie Antoinette, who was delighted to give her patronage to the initiative.
For the Manufacture de la rue Thiroux, it was not only a formidable protection, but it placed it on the front of the scene.
Let us recall that the Queen, with the installation of her domain of Trianon, was one of the most important patrons of the period.
Hence, several products resulting from the manufacture joined Trianon, in particular for the decoration of the dairy in the hamlet of the queen.
Leboeuf also used publicity quite wisely. Thus, one could read in the Gazette of December 4, 1778:
“The Owners of the Queen’s Porcelain Factory established on rue Thiroux, inform the Public that the Queen willing to honor their establishment with her protection & allow it to be adorned with her august name, each newly manufactured piece will henceforth be marked above with a crowned A, the first letter of Her Majesty’s name. “
From then on, the depot of the factory was installed at Granchez, the queen’s jeweler.
An additional outlet facilitating the trade in the most beautiful Parisian houses.
The Gazette of December 4, 1778 had already touched on the subject. As Henry Havard confirms in his dictionary of furnishings and decoration, “each piece was marked, underneath, with a crowned A, the first letter of Her Majesty’s name.
Depending on the case, the A was surmounted or not by the royal crown. In any case, the importance of the protector was essential.
As Edouard Garnier writes in his history of Ceramics, a great number of types of objects were produced in the factory of the street Thiroux. “All the kinds of decorations were made in this factory”.
One seems to be particularly a specialty: “one of simplest and at the same time most charming is the decoration known as with ‘Barbeaux’, which consists in a sowing of ‘bleuets’ (cornflowers) finely and delicately carried out”.
Thus, this manufacture was fully in line with the style called later Marie Antoinette, namely very flowery. One finds it expressed in its quintessence in Trianon.
As one can imagine, the protection of the queen was a great asset, as long as she was on the throne. But, this situation became much more complicated at the Revolution.
In 1790, production was halted and in 1794, Leboeuf was forced to sell his factory , and the name on the pieces produced would now only be signed by only the address: Rue Thiroux Paris.
The company would be dissolved by 1804.

We fell in love with the history of these 2 pieces as well as the incredible pristine state they are in!
Both pieces are Marked with the Red Crown A for Marie Antoinette.