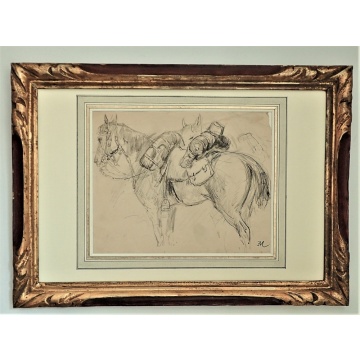 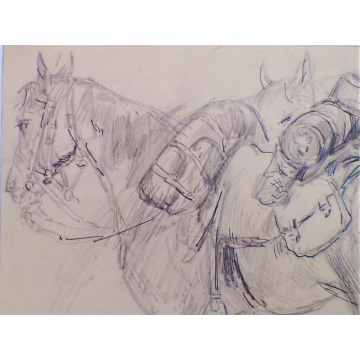 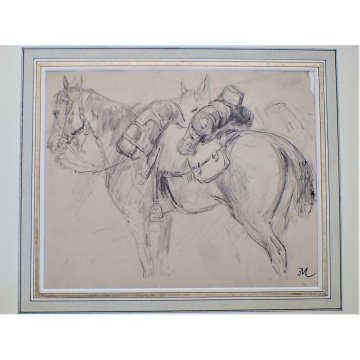 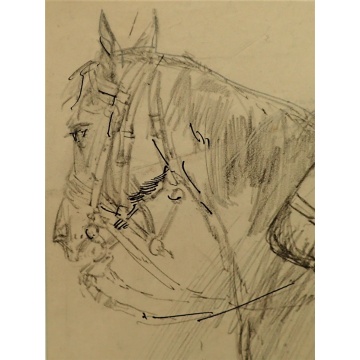 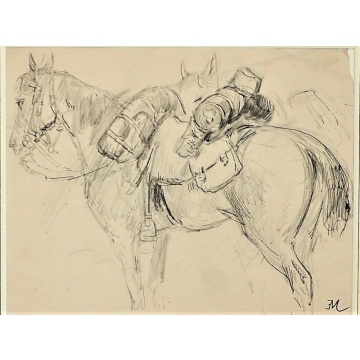 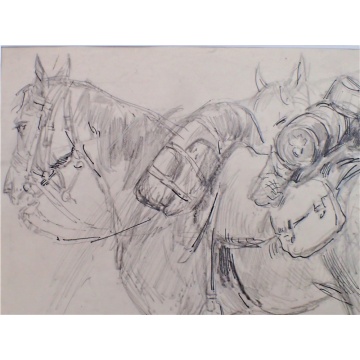 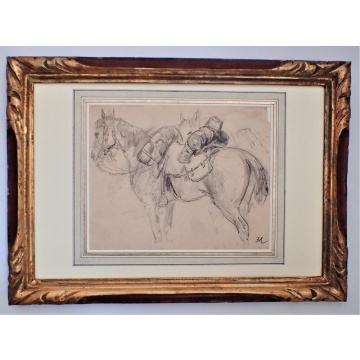 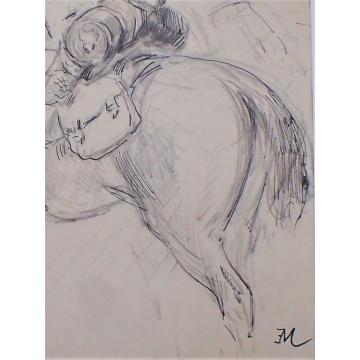 Pencil And Ink Drawing Of A War Horse By Meissonier~Sold~

This masterful representation of a saddled and battle-ready horse, is typical of the studies done by Ernest Meissonier prior to creating his paintings.
The horse’s face is beautifully rendered as is the saddle and packs he carries.
The drawing is mainly done in Lead Pencil and accented with black Ink in a few places.

The drawing is signed with Ernest Meissonier’s initials in the lower right corner as usual, and shown in photo # 8.

A perfect representation of Meissonier’s talent!

Jean-Louis-Ernest Meissonier, known as Ernest Meissonier, born February 21st 1815 in Lyon, was a French painter with a proclivity for history and war paintings. Prodigiously talented, Meissonier began exhibiting at the French Salon at the age of 19.
He trained in the studio of Léon Cogniet after studying under Jules Poitier, but was largely self-taught.
He honed his meticulous rendering of detail by studying the works of Dutch painters of the 17th century, as well as by closely observing costumes, armor, and nature. His favorite subjects were the Napoleonic wars and episodes in the life of Napoleon Bonaparte. Though his paintings usually celebrated heroic military campaigns, Meissonier also depicted the horrors of war.

Showing regularly in the July Monarchy Salons, he quickly became known for his masterful draftsmanship and scrupulous attention to detail and authenticity, amassing his own “work library” of accessories at the local costume markets.

Meissonier determined to become the modern van der Meulen (Adam Frans van der Meulen, the prestigious military painter to Louis XIV), and shifted from historical genre to images of modern warfare and military life as both “high” history painting and genre.
His passion for military affairs culminated, in 1859, in an imperial commission for an illustrated book on the current Solferino campaign, with a text by Edmond Texier of Le Siècle. His representation of contemporary military subjects expanded to include earlier Napoleonic subjects. Meissonier’s career prospered despite the fall of his imperial patron in 1870. A staunch nationalist who fought in the Franco-Prussian War and was deeply upset by his country’s defeat, he pursued the Napoleonic imagery in part to remind his compatriots of France’s proven military glory.

By the time of his death in 1891, Meissonier’s paintings and prints could be found throughout Europe and the United States. He was also a recognized power in the art world. He had served on Salon and Universal Exposition juries, been elected to the Académie des Beaux-Arts in 1861, served as president of the Institut de France and later of the Société Nationale des Beaux-Arts, and received an elaborate academicians’ funeral at the Madeleine in Paris.