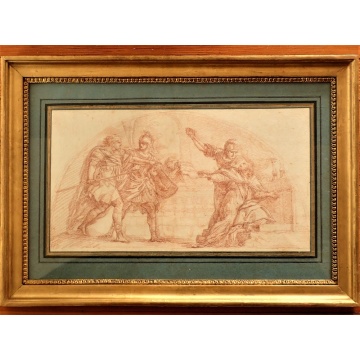 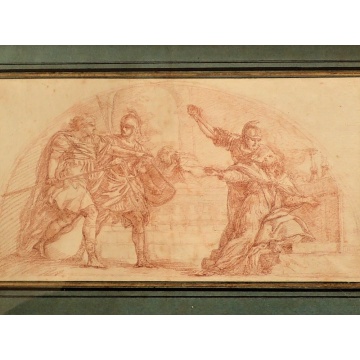 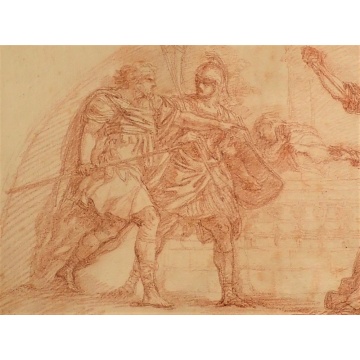 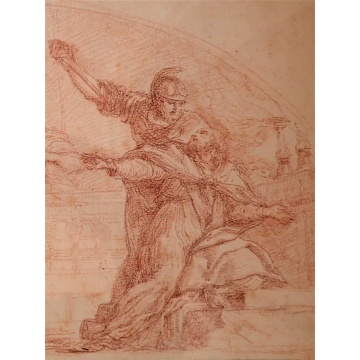 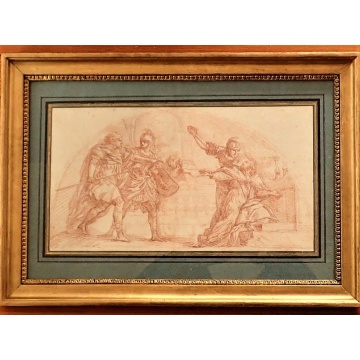 This powerful work typical of the Ango’s strong hand, is a copy he made of a Fresco by Cirro Ferri found in the Chapel Of the Holy Sacraments in the Santa Prassede Basilica in Rome.
It depicts the Pope falling on the steps of the Altar while one of the soldiers prepares to stab him with a dagger, in front of his two accomplices.
This drawing is typical of the Ango’s draughtsmanship with strong contours and heavy modelling, and is done in Red Chalk or ‘Sanguine’.

Jean-Robert Ango, who was born around 1710 and died in Rome in 1773, was a French draughtsman of the second half of the 18th century known for his copies and his collaboration with Hubert Robert and Jean-Claude Richard de Saint-Non for whom he supplied 27 etchings and aquatints for his work ‘Voyage pittoresque ou Description des royaumes de Naples et de Sicile’

Most of the biographical information about Ango comes from the writings of his friend, the painter Jean-Antoine Julien, who established in his autobiography that Ango was already in Rome in November 1760;
He also described Ango as a painter, although only drawings by him survive.
In 1772, in correspondence with the Belgian painter Andries Cornelis Lens, Julien referred to an attack of apoplexy that had left Ango half-paralyzed and reduced to living on charity. Julien’s last mention of him is on 16 January 1773.
Dated drawings known to be by Ango are from the period 1759–70. Most of the surviving drawings are of paintings and decoration in Roman churches and palaces,as is the case with this beautiful work.
However some drawngings attest to a knowledge of Naples, and it is recorded that on 18 March 1761 Ango and Jean-Honoré Fragonard were given permission to draw copies of the paintings in the gallery of Capodimonte there. Many of Ango’s drawings are copies after Old Masters such as St Lawrence Giving Alms to the Poor (red chalk; Paris, Louvre), a copy of a painting by Guercino (untraced; ex-S Lorenzo fuori le Mura, Rome).
Some are after his contemporaries Fragonard and Hubert Robert (e.g. the Corpus Domini Procession, black chalk, Paris, Gal. Cailleux after the original by Robert (London, priv. col.), and in a number of instances he reworked counterproofs of drawings by Robert (e.g. the Draughtsman of Antiques, black and red chalk, 1762; Cambridge, MA, Fogg) after the original drawing by Robert (Valence, Mus.).
Ango also recorded in drawings the paintings in the collection of Bailli de Breteuil, ambassador of the Order of Malta to the Holy See from 1758 to 1780.

Many of his drawings were wrongly attributed at first to Hubert Robert, Fragonard and even Boucher.