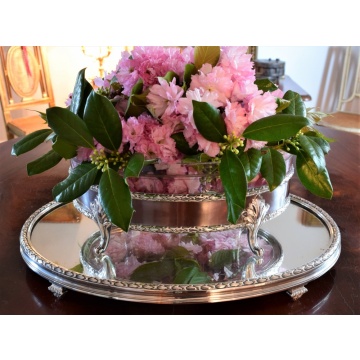 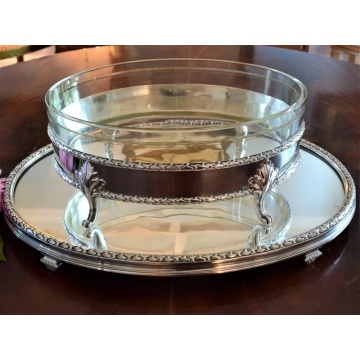 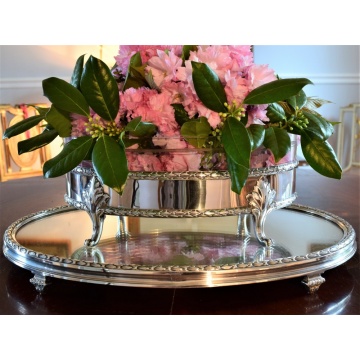 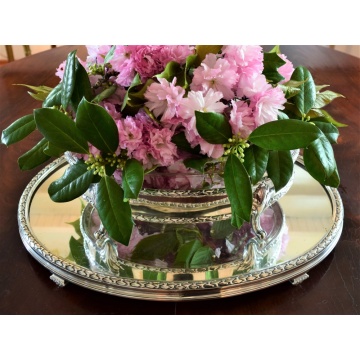 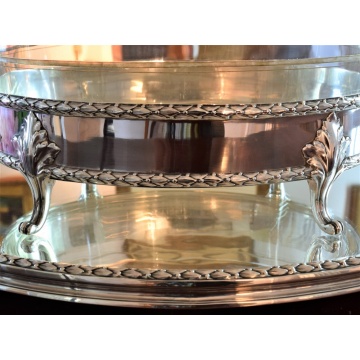 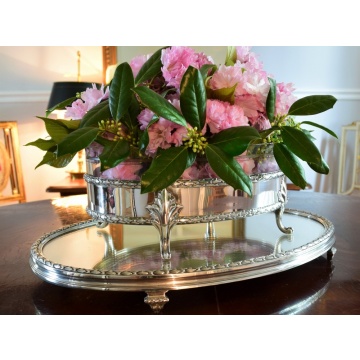 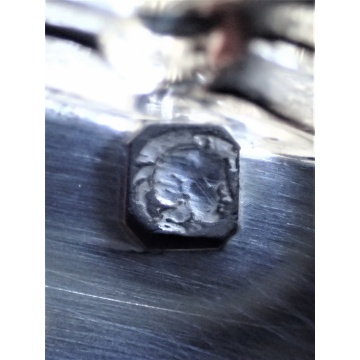 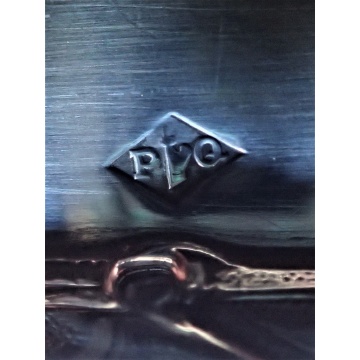 Called in French a ‘Surtout’, this gorgeous piece consists of a Jardinière and its matching ‘Dormant’ or plateau.
The ‘Jardinière’, or center table if you would rather, was used in a variety of ways in order to embellish the table, by either setting flowers or fruits or other items that could enhance the set up.

This Elegant duo piece shows a heavy silver gallery lined on each side by a Laurel wreath with the four feet done in a gorgeous solid silver acanthus leaf.
The Dormant shows the same lovely design on its side and tiny Corinthian style feet.
Its center consists of a mirror which reflects the jardinière, while the bottom part of the dormant is made of mahogany wood.
The work is exquisite and the full effect striking.
Filled with flowers it is absolutely stunning as you can see from the photos…

The clear crystal insert is in perfect condition no chips and is original to the piece. The silver gallery is in perfect condition.
The height and measures given above are that of the complete piece.
The Jardinière itself measures: 11.20 inches long by 8.85 inches wide and 7.48 inches high with the crystal.
The silver weight given is only that of the Jardinière piece. The surtout silver has not been weighed as it is attached to the mahogany dormant and the mirror insert.

The Makers Mark is for Pierre François QUEILLE.
His mark was registered on October 23rd 1834. The Makers Mark showed a P and a Q separated by an Antique Oar.

He started a dynasty of Master Silversmiths in 1834 and stayed in business from 1834, to the 27th of November 1846 (Date his mark was cancelled).
Pierre François QUEILLE had his workshop at ’70 Rue du Faubourg Montmartre in Paris’.

He left over his practice to his son Eugene QUEILLE who moved shop to ‘8 Rue Saint Roch Poissonière’. He started work on February 11th 1847.
He then in turn left over his practice to his son: Pierre François QUEILLE who was named after his grandfather.
They moved their practice in 1874 to ’11 Rue des Petits Carreaux in Paris’.
Their production was sold by other Master Silvermiths as well, and they collaborated with several bigger names as the House of ODIOT and the House of FROMENT MEURICE
Their House stopped production in 1930.