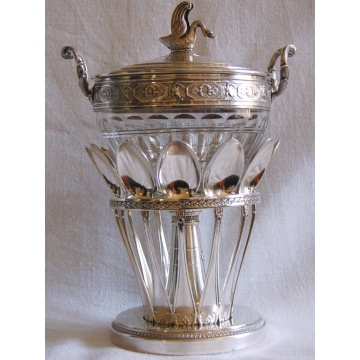 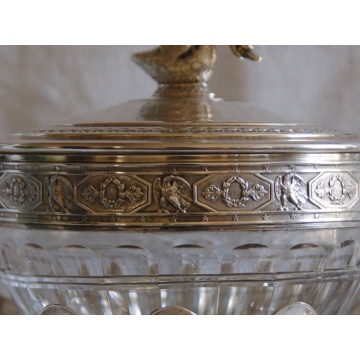 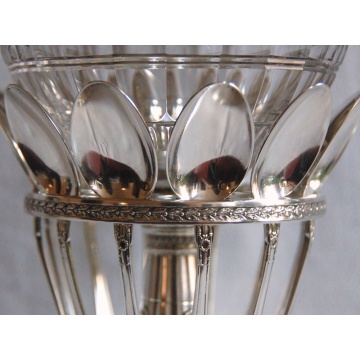 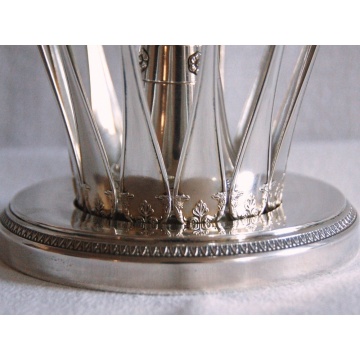 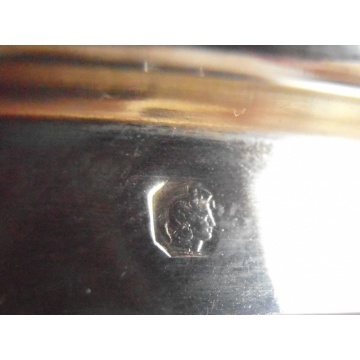 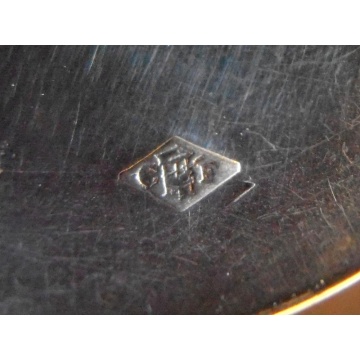 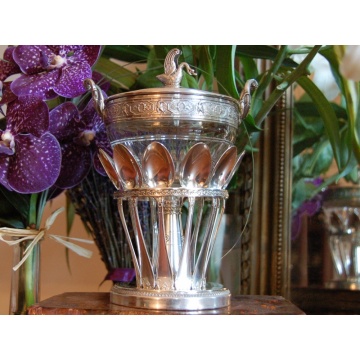 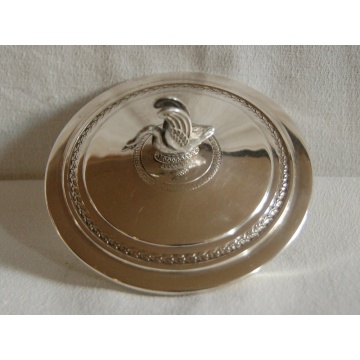 Refined Empire Style, Antique French Silver and Crystal ‘Confiturier’ by Charles FORGELOT.
Although sometimes called a ‘Drageoir’, the only official name for this piece is a ‘Confiturier’ (Hence a Jam Vase), but as already noted in other descriptions, it is today thought that these pieces were mostly used as ceremonial sugar bowls.
It is nowadays extremely rare to find “Confiturier’s” still showcasing the spoon holders, and even more so the matching spoons, which makes this lovely piece all the more rare!

The body of the ‘Confiturier’ is made of heavy engraved crystal circled on the upper rim by a beautiful ‘repoussé’ silver band.
It looks tailor made for the US as the details on the silver band are actually standing Eagles separated by medallions and laurel crowns. On the upper and lover fringe you can find stars!
The bowl rests on a ‘Piédouche’ or pedestal in silver, circled top and bottom by a fringe of laurel vines and sporting small rosettes.
Right below the crystal bowl we have a silver circular band with oval openings which is actually a spoon holder. The spoons come to rest in a made to order ridge at the bottom of the Pedestal.
The spoons were made by Charles FORGELOT which is rather rare, as spoons were usually done by ‘Cuilleriste’ or spoon makers and not by the main Master Silversmith.
They show the same eagle heads that feature on the upper silver band, as well as the medallions and laurel crowns. On the back of the spoons two swans face one another.
The Handles are decorated with acanthus leaves and rosettes.
The lid is circled by a band of laurel leaves and sports a beautiful swan as a ‘Frétel’ (or Finial).
The body is white crystal with ‘facettes’, it is original and in impeccable state.
The crystal is not removable hence the weight given includes the crystal.

The Maker’s Mark is for Charles FORGELOT
His Mark shows a C and an F with in the middle a portable forge. He registered his mark in 1901 and cancelled it in 1928.