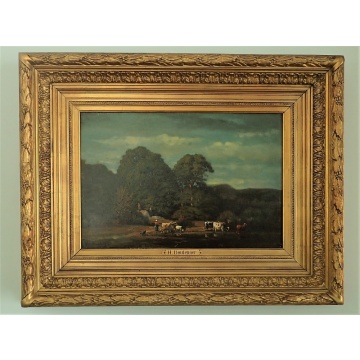 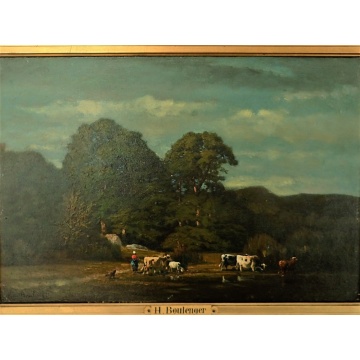 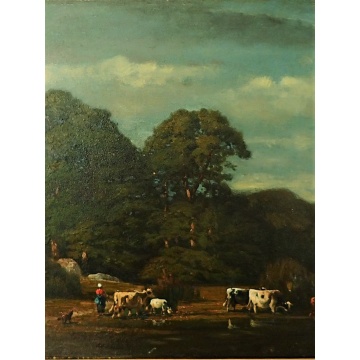 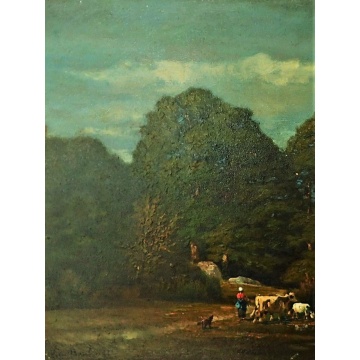 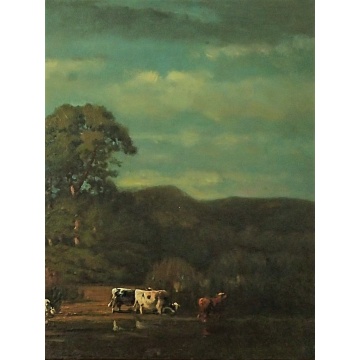 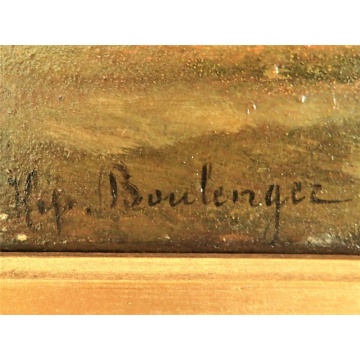 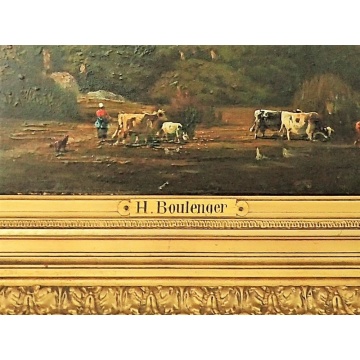 Shepherdess And Cows By A Pond By Hippolyte E Boulenger

Lovely Oil on Panel Painting of A Shepherdess and Her Cows by A Pond by Hippolyte Emmanuel Boulenger.

Emmanuel Hippolyte Boulenger was born in Tournai in 1837, to parents of French origins, and died in Brussels in 1874. He lived in Paris between 1850 and 1853 and studied drawing. A pupil of Navez at the Brussels Academy, he also received the advice of J Quinez.
In Paris he became friends with the Barbizon group and admired Theodore Rousseau, Millet, Courbet and Corot.

In 1863, he discovered the charm of the village of Tervueren in Brabant, in the Soignes forest and settled there thanks to the support of his friend the painter Camille Van Camp.
Boulenger founded the ‘School of Tervueren’, which aimed to respond to the Barbizon School, while affirming its Belgian character. Like the French landscape painters of the Fontainebleau forest, the painters of Tervueren, by painting as much as possible outside, and by capturing the indefinable of changing moments, contributed with Boudin and Jongkind to prepare the future of Impressionism.
Boulenger attracted to Tervueren Baron, de Greef, Roseels, Louise Heger, Verheyden.
The group exhibited at the Brussels Salon of 1866.
Boulanger then participated in the same Salon in 1872, the year in which he was awarded a medal, while he also exhibited at the Paris Salon in 1873 and 1874. He died very young, suffering from epilepsy and alcoholism, and in 1931 he was honored by a retrospective in Brussels.

Boulenger and the Tervueren group scandalized by the raw tones of their landscapes painted under the real sunlight. He himself knew how to translate the various poetic emotions peculiar to forest landscapes, according to the seasons, the hours of the day, or the fluctuations of time. In his attention the infinite diversity of light that metamorphoses what it touches, he presages Monet. All the more so as, in some ‘Etudes de ciel’, he simply abandons any subject that has become useless to concentrate on light alone.
If he admires Corot and Courbet, it is the expressive force of Vlaminck and Permecke that he announces through his violently posed strokes, his striking contrasts, his trees fiercely standing upright on stormy skies in a darkening light.
He expresses in his paintings all the deep and wild poetry of the forest, which in our painting is contrasted by the domesticity of the shepherdess and her cows.

Our Painting was part of a 1974 Exhibition on Belanger’s works in Brussels, in a tribute given on the 100th Anniversary of his death.
The owner of the painting kept the Newspaper insert advertising the Exhibition and inviting owners of Boulenger’s work to volunteer their paintings for the temporary Exhibition. We have translated the insert here below:

‘On the 4th of July it will be a century ago that Hippolyte Boulenger died in Brussels at the age of 36. He was one of the greatest Belgian landscape painters of his time and became captain of the so-called ‘School of Tervueren’.
On the occasion of the 100th anniversary of his death, the Royal Museums of Fine Arts of Belgium wish to present a tribute to him in Brussels from 13 September to 20 October. They would very much appreciate it if collectors in possession of works by Hippolyte Boulenger could lend them to the exhibition. They can contact the H.A.Moerman, attaché at the Royal Museums of Fine Arts of Belgium.’

Our painting is presented in its original Barbizon School gilt wood frame, which is in fine condition.