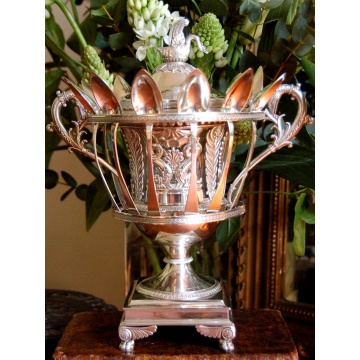 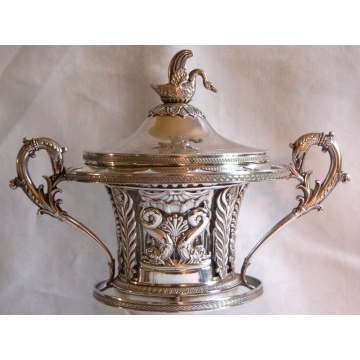 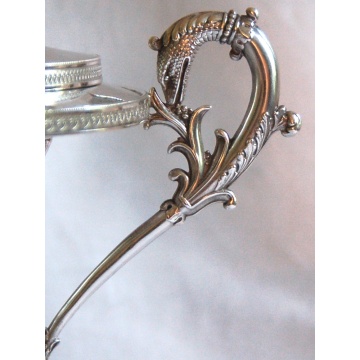 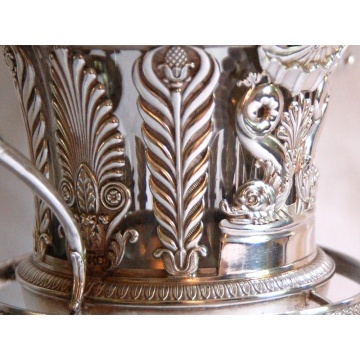 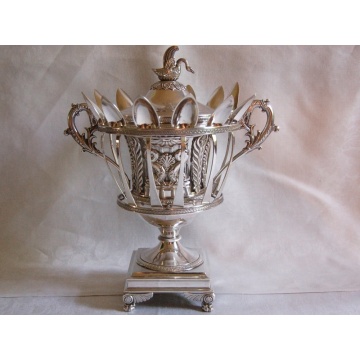 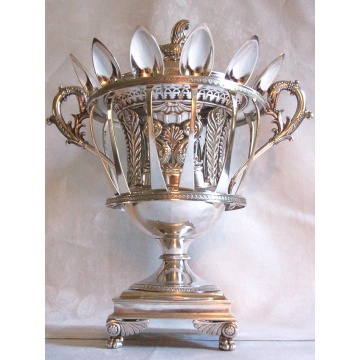 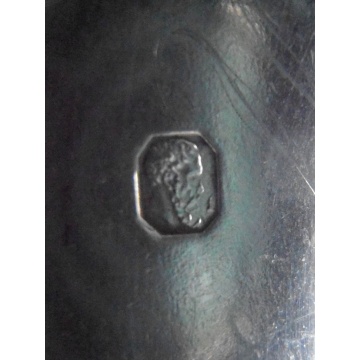 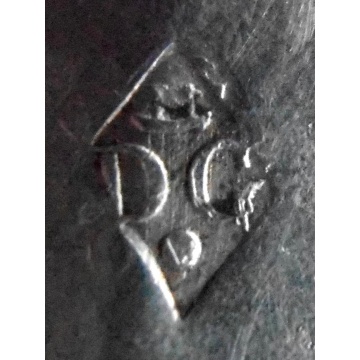 Though the term ‘Confiturier’ literally means Jam Holder, it appears that originally it was mostly used as a ceremonial sugar bowl.
It is nowadays extremely rare to find “Confiturier” still showcasing intact spoon holders, as well as their spoons, hence the importance of this piece!

Let us start by the upper part:
The cover or lid is slightly dome shaped and circled by a line of silver pearls.
The ‘Frétel’ or Finial is beautiful, it showcases a finally detailed Swan with outstretched Wings resting on a shell. So fine is the work you can actually see each feather as well as the shell details! The Finial rests on a crown outlined by a wreath of acanthus leaves.
The sides of the lid are decorated with a geometrical silver wreath, and the lid itself is decorated with a coat of arms.

The Confiturier’s main part is shaped as a Medicis Vase.
The upper register of the vase is lined with a circle of solid silver decorated on its edge by Acanthus leaves. It also features twelve solid silver spoon holders stretching out along its rim.
The handles consist of two delicately decorated snake heads, sprouting out of acanthus leaves. Here again the details on the snakes heads is lovely!
The Main register of the Medicis Vase is decorated with 2 beautiful dolphins with a conch shell resting above, and four different shapes of palms.

A second circle of silver is attached to the lower part of the handles and is decorated with laurel leaves; it enables the spoons to stay in place…

The square base rests on four Lions paws showcasing rosettes and wings….
The insert is clear solid crystal decorated with wheel cut facettes, it is original to the piece, and in perfect condition.

This is just a wonderful work of art!
It can also be put to use as a Beautiful Caviar Serving Bowl!! A gorgeous way to use it as a matter of fact!

The Particularity of the Confituriers, during that particular era, is that the Maitre Orfèvre who did the main object, did not create the spoons…
He always ordered the spoons from a Maitre Orfèvre who specialized in them, in French a ‘Maitre Cuilleriste’
The twelve spoons share the same ‘Poinçon Au Vieillard’ Hallmark, and are also solid silver

The Makers Mark for the Confiturier is that of Denis GARREAU. It shows a D and a G topped by a ‘Navette’ (or boat)
GARREAU was the successor of Ambroise MIGNEROT and specialized in larger decorational pieces (called in French ‘Pièces De Forme’), particularly ‘Drageoir’ and ‘Confiturier’. His mark was created in 1817. His offices were located at 62 Rue du Temple, in what is today the Marais area of Paris.
The Spoons are by Maitre Orfèvre Cuilleriste Nicolas BONAVENTURE BASCON, who registered his mark in 1828. He worked at 14 Rue Simon Lefranc, about a couple of blocks away from Garreau’s offices.