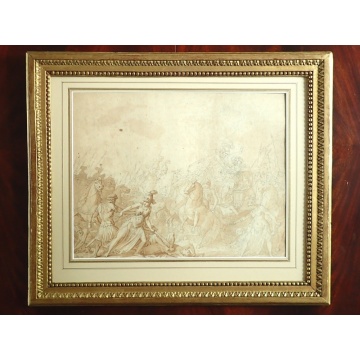 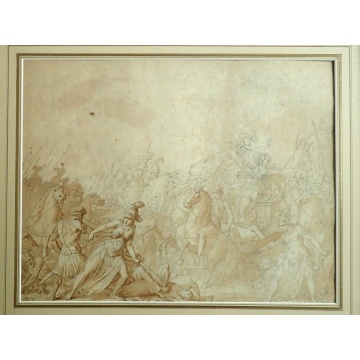 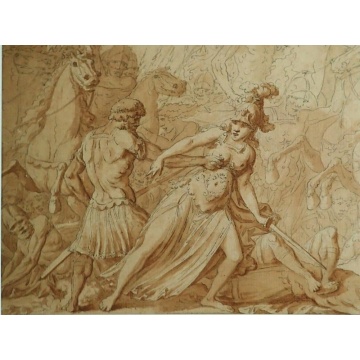 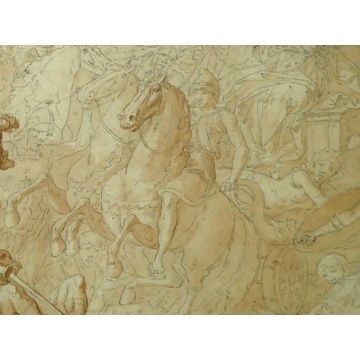 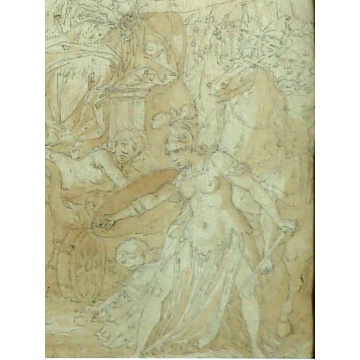 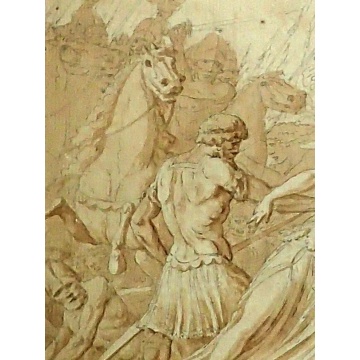 The drawing is executed in lead pencil, ink and brown wash in masterful strokes which bring to life the scene depicted.

The painting most probably represents the Abduction of the Sabine Women by the roman Army.
Often called in English the Rape (from raptio in latin, which actually means abduction) of the Sabines, the event takes place in the early history of Rome.
Shortly after the founding of the City by Romulus and his mostly male followers they went out seeking wives in order to establish families.
The Romans tried unsuccessfully to negotiate with the Sabines who populated the surrounding area.
The Sabines refused to allow their women to marry the Romans, fearing the rise of a powerful society close to theirs. Consequently the Romans plotted to abduct the Sabine women during the Neptune festival they gave as a decoy.

At the festival where they had invited the neighbouring towns, Romulus gave a signal and the Romans grabbed the Sabine women and fought off their men.

The event inspired many paintings during the Renaissance and post renaissance era, one of the most known done by Poussin.

Philibert Benoit DE La Rue was a painter and draughtsman, brother to Louis Felix De La Rue and known for his battle scenes.
He was called De La Rue l’Ainé, and was born in 1718. A student of Charles PARROCEL he obtained in 1748 the Silver medal from the Académie Royale de Peinture, who admitted him a few years later in 1753.
Extremely talented, he was the only one deemed worthy enough to finish the ‘Battle of Lawfeld’ started by Charles Parrocel, after his passing.
He became ill in 1756 and was interned at the Notre Dame Des Vertus Asylum, subsequently stopping his work.
He passed away without ever stepping out again in 1780.

His mastery of the battles scenes was quite amazing.

The drawing was appraised by the Cabinet de Bayser.
It was purchased in Marseille in March 2018.

The frame is a beautiful Louis XVI gilt wood frame, in great condition….