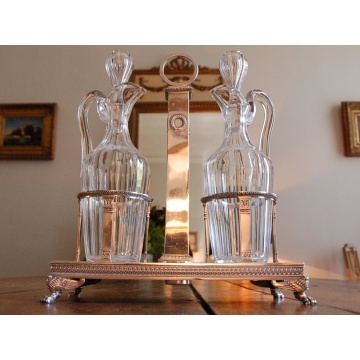 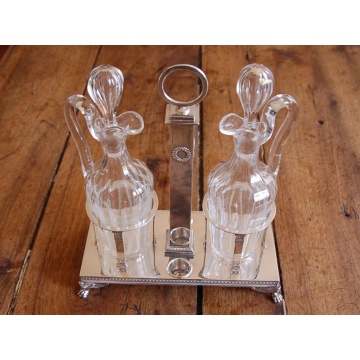 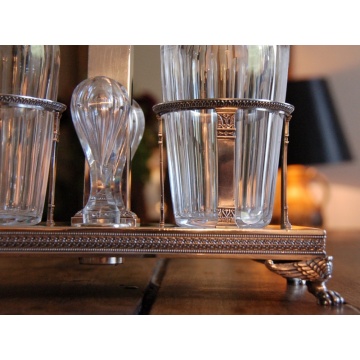 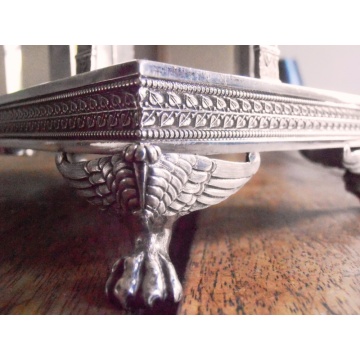 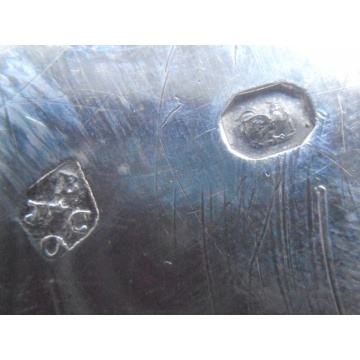 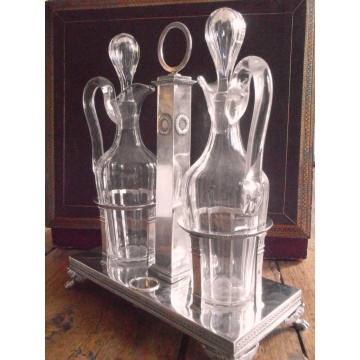 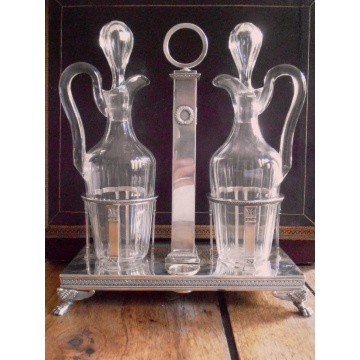 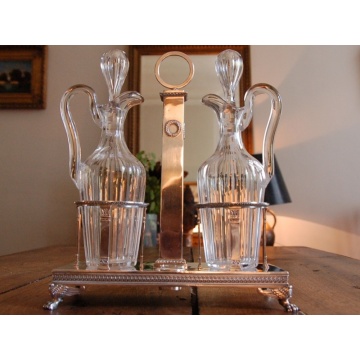 Stunning and Exceptional Antique French Silver and Crystal Oil and Vinegar Cruet Stand by ‘Maître Orfèvre’ to Napoleon the 1st himself, Jean Baptiste Claude ODIOT grandson of founder of the Silver Dynasty of ODIOT!

The piece is incredibly modern, with an exquisite craftsmanship concentrating on the details and highlighting the very pure design. The central hold is in the shape of a square column, decorated by a wreath of laurel leaves on each side and ending in a very simple and elegant circle of silver.

The square base rests of 4 powerful lions paws, topped by eagle’s wings.  We find in this gorgeous piece the expression of the love that Jean Baptiste Claude ODIOT expressed for all things ‘Antique’ heralding the Empire Style.

The cruets are made of crystal, hand blown and wheel cut. They might have been added at a later time but fit perfectly the piece. The stopper stands are actually integrated into the square base, adding to the modern feel of the piece

Jean Baptiste Claude ODIOT’s Makers Mark shows a J, a B, a C, and an O in a lozenge Mark. He was received Master in Paris in 1785 and his mark was cancelled (biffe) in 1809.He succeeded his father Jean Claude ODIOT who had in turn inherited the business from his father, Jean Baptiste Gaspard ODIOT creator of the family business in 1650 and Silversmith to Louis XV. After the father’s death in 1788 Jean Baptiste Claude ODIOT had to face the hardship of the revolution years, and was so much impacted by the revolution and the law banning exportation of silver items in 1792 that he had to join the army until 1801. He then re ignited his career and went on to become NAPOLEON’s favourite Maitre Orfevre (along with Biennais). He created the Coronation Sword and Sceptre used by Napoleon. He was also the maker of the Silver and Gold service used by the Imperial Family and even created the Imperial Cradle for Napoleon’s son (the King of Rome), as well as Napoleon’s campaign dinner service.

As one of his first assignement he was mandated by Thomas Jefferson to create several pieces. He went on to acquire an amazing reputation and received special orders from all the European Courts as well as those of the Middle East and India. He was succeeded by his son, then his grandson with the final direct descendant Gustave ODIOT creating a joint company with 2 other ‘Maitres Orfèvres’ in 1906. During all the successions, what made the ODIOT Name a household name was the amazing talent they possessed that enabled them to be precursors but also to follow and create the trends that would lead the market. One of the last creations done by the great grand son Gustave ODIOT was an amazing request put through by the Royal House of Egypt and Said Pacha for a 3000 pieces Gold service set.

Today the House of ODIOT still stands at 7, Place de la Madeleine Paris. If you ever visit the Père Lachaise Cemetery Jean Baptiste Claude ODIOT was laid to rest in the 4th division.