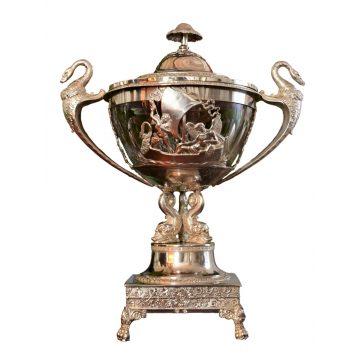 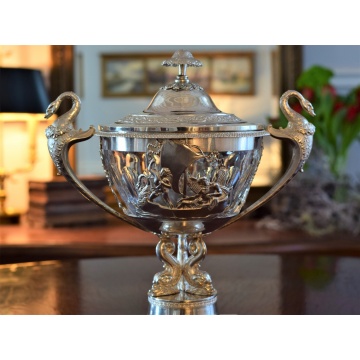 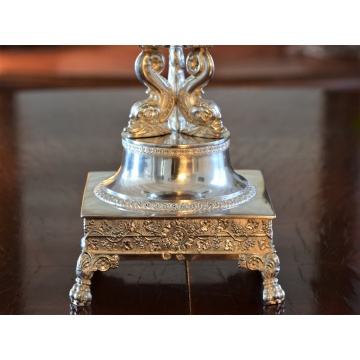 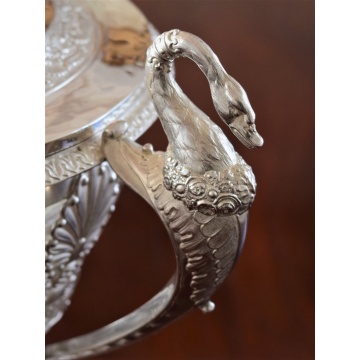 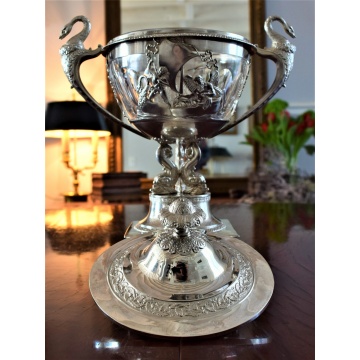 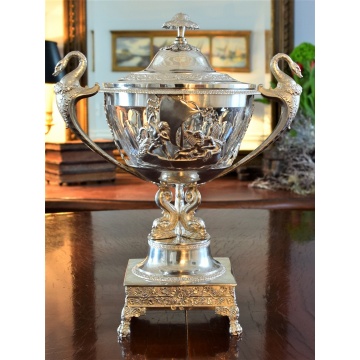 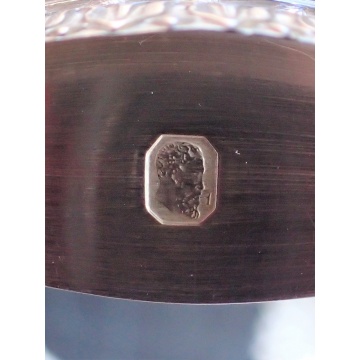 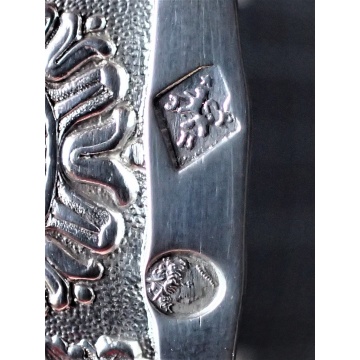 A Superb Antique French Silver and Crystal Drageoir by Jean Pierre Bibron.
While the name suggests it held sweets, it is actually a more regal sugar bowl.

Quite often this object would be gifted for weddings and held symbols of love and as such would very often feature Cupids or wedding scenes.
Let us start by the upper part:
The cover or lid is slightly dome shaped and circled by a lovely wreath of flowers. The ‘Frétel’ or Finial is charming showcasing a gerbera flower resting on a crown of acanthus leaves.
The main register of the Drageoir shows the same scene of each side. The scene depicts Cupid, steering a boat in which a very dejected Chronos has taken place.
Chronos can easily mistaken for Cronos, the King of the Titans, but in this case he is Chronos the primordial God personifying Destiny and time-space.
Cupid looks triumphant with his bow slang on his should while Chronos looking downcast, lets his scythe trail in the water. The boat’s bow is decorated with a swan which symbolizes fidelity. The whole metaphor is that of Love if in your Destiny, conquers time and death….
The handles consist in two Majestic Swans rising out of an acanthus cornucopia. Here again the details on the swans are staggeringly beautiful! The heads, eyes and beaks are just amazing!
The lower part of the cornucopias meet large Palmetto that rise on the side of the silver vase. The secondary ‘tableau’ behind the two handles are delicate palmmettos.
The Pedestal is just gorgeous!
It consists of 4 Dolphins sculpted in the typical ‘Ronde-Bosse’) Style. The Tails fan out by the start of the pedestal around the gadroon lined part and the rest of the bodies are beautifully worked. The details of the heads by itself are beautiful…
They rest on a round plinth circled by laurel leaves, the plinth itself set on a square base resting on 4 lion’s paws.
The Base is decorated with grape vines and the four Lions paws showcase rosettes and wings….
The bowl insert is white crystal cut with facettes, it is original and in impeccable state!

This is just a wonderful work of art!
It can also be put to use as a Beautiful Caviar Serving Bowl!! A gorgeous way to use it as a matter of fact!

Jean Pierre BIBRON’s Makers Mark shows ‘A Rampant Lion with a Star over the Lion’.
He was received Master in Paris in 1798.
He held shop the gorgeous ‘Ile de La Cité’ in Paris, 3 Rue de Harlay.