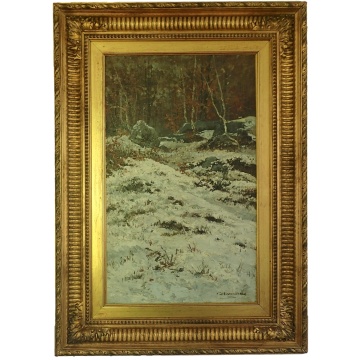 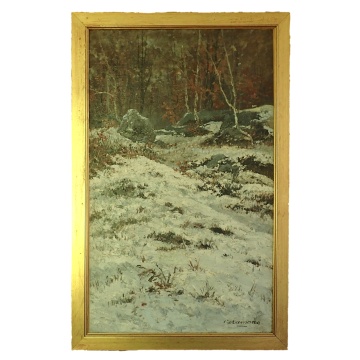 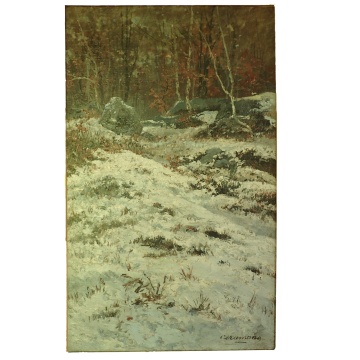 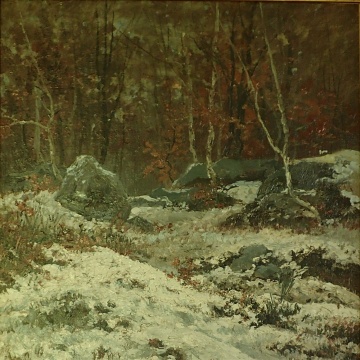 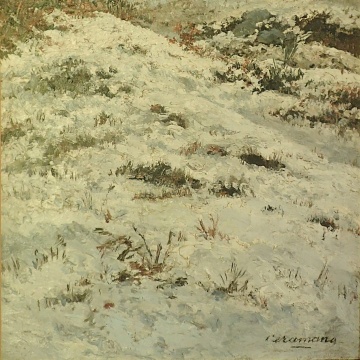 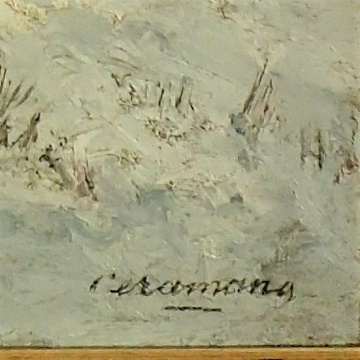 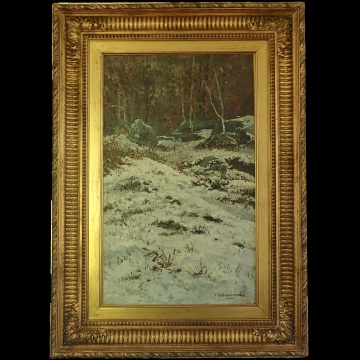 The Forest In Barbizon with snow effects by CF Ceramano

A beautiful study of Snow Effects in The Barbizon Forest by Charles-Ferdinand Ceramano.

Charles Ferdinand Ceramano was born Sermain on May 31st 1831, the son of Philippe Sermain, a shopkeeper-cum-hanger from Kortrijk, and Anna Gheysens, a Oudenaarde-born seamstress from Harelbeke.
Charles Ferdinand started to work together with his father, so that attending school from the age of fourteen was no longer an option for him; but the newly founded Art Academy of Tieltse was able to steer his tender talent for drawing in the years 1844-1845 in the right direction.
On November 6, 1849, the family sought a better life in Brussels where Ceramano/ Sermain found a rich breeding ground for his talent, as a follower and. as he often mentioned, as an apprentice of the now very famous animal painter Eugène Verboeckhoven.

In the autumn of 1872 after a short stay in Paris, Sermain settled in Barbizon, some ten kilometers northwest of Fontainebleau. Barbizon was the most renowned painters’ colony of all those that steered French landscape painting in new directions between 1830 and 1860, specifically the Plein Air school of thoughts.
When Sermain arrived in Barbizon in late 1872, he took up residence in the studio of Narcisse Diaz de la Peña. Only then did he capitalize his name to Ceramano, the name with which he signed his canvases and which, curiously, is also recorded in the register of the 1881 census.
Ceramano was not the only Belgian painter who was attracted by the unspoilt nature of Barbizon. Before him, the Kortrijk-based Gustave De Jonghe and Camille Van Camp from Tongeren had been guests at the Gannes, and Alfred De Knyff had been a pupil of Theodore Rousseau there. Besides Edmond de Schampeleer and Adriaan Heymans, Joseph Coosemans and François Lamorinière, Victor Papeleu also found an ideal study ground there.

For Ceramano, the first years in Barbizon must have been a time of diligent painting. It was not until the Paris Salon of 1875 that the free-spirited painter came to full attention as an accomplished animal and landscape painter. Ceramano began to make his mark in Barbizon as an animal painter and increasingly as a landscape painter. He began to focus on painting scenes with sheep.
At first glance, his interiors of sheepfolds and his pastoral scenes are strikingly like those of Charles Émile Jacque, but Ceramano was more of a follower and admirer than as a pupil of Jacque who, by then, had already left Barbizon.

In 1875 Ceramano participated for the first time in the Parisian “Salon des Artistes Français”. His canvas “Lisière de forêt” was purchased by an art lover from Chicago. Through art broker Joseph Bula, his work also became further known in the United States. Thanks to the orders that soon followed, for the painter, who had arrived in Barbizon penniless, the worst of his material needs were over.
He initiated the Barbizon and 1876 exhibition at the Nouvelle Auberge de Siron, which, like the former Ganne Inn, was to become a stopping place for artists and a permanent exhibition hall called the Hôtel de l’Exposition (now Hôtellerie du Bas-Bréau). Ceramano also exhibited one of his works “Moutons fuyant l’orage à travers bois” at the Salon of Antwerp in 1876.
Almost all the scenes in his canvases can be situated in the Fontainebleau region.
Around 1888 Ceramano settled in Les Vaux-de-Cernay, 23 km south of Versailles. Before him, numerous Barbizon painters had already spent time in this picturesque village: Rousseau, Corot, Diaz de la Peña, Huet, Brascassat, Troyon. A friend of Ceramano’s, the landscape painter Louis-Germain Pelouse, had his permanent home there in a studio that the Rothschild family made available to him.
In the 1890s Ceramano continued to be very active. In 1893 he exhibited his works both in Antwerp and Bordeaux. He continued to participate in the annual Paris Salon and in 1897 had an exhibition in a gallery on Paris’ Boulevard Saint-Germain.
In 1896 Ceramano returned permanently to Barbizon.
After Chaigneau’s death in 1906, Ceramano continued the tradition of the Barbizon School on his own, his work was nevertheless influenced by the dominant Impressionism after the turn of the century. The cornfields he painted in 1900 in the plains of Fleury and of Chailly, for example, and the canvas ‘Un côté de ma demeure à Barbizon’ that he brushed in 1903, show many features of the new movement.
An article in “L’événement” of November 2, 1891 casually describes the artist’s appearance: “the head of a God-the-Father brushed by Rembrandt. Striking is the contrast of his brightly colored face with his long snow-white curly hair and his beard shining in the sun.”
Ceramano had become a living anachronism: The last of the Barbizon artists. He converted his studio into a sales room where he gladly regaled the interested visitor with a series of nostalgic memories of the artist’s life in the past. Old and infirm, he desired only one thing: the survival of his gallery, which had to keep alive the memory of the Barbizon school.

On April 22, 1909, Ceramano died in Barbizon. Ceramano was one of the first to be buried close to the main entrance in the then new Barbizon cemetery. Necrologies in “La Gazette des
Beaux-Arts ” and in “Le Bulletin de l’Art Ancien et Moderne” prove that he had not been forgotten.