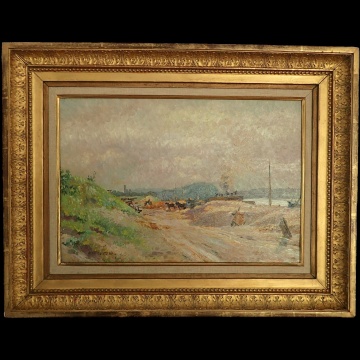 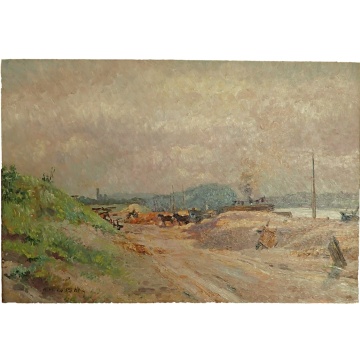 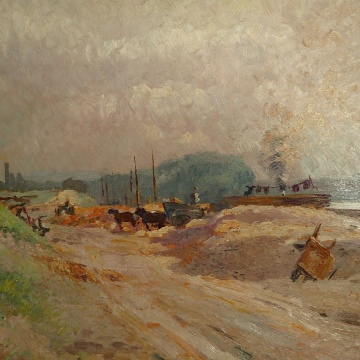 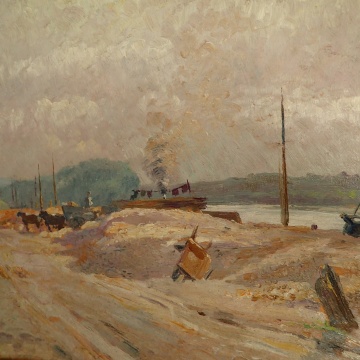 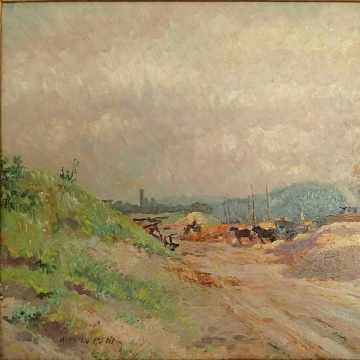 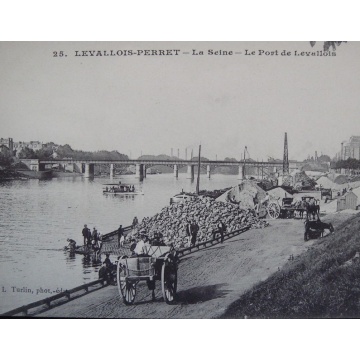 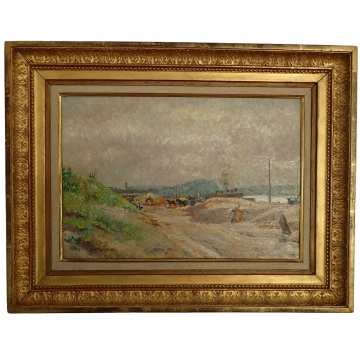 The Port of Levallois-Perret By Alfred Marie Le Petit

A Lovely Oil on Panel Painting of the Port of Levallois-Perret seen from the Quai Michelet By Alfred Marie Le Petit.

Alfred Marie Le Petit transports us to the end of the 19th century at the gates of Paris with this snapshot of a quay along the Seine in Levallois-Perret.

The industrial revolution as well as the World’s Fairs of 1878 and 1889 profoundly modified the panorama of the Capital.
Paris attracted an increasing flow of newcomers and had to constantly expand and modernize to accommodate them.
The artist has captured the moment as a poignant testimony to the transformation of the landscape, using an original angle of view.
In the foreground, in the right-hand corner, the embankment left in a wild state is treated in a cameo of greens, to better remind us of the presence of nature and the striking contrast that opposes it to urbanization.

This urbanization is manifested by the presence of a work area where mounds of sand and stones are piled up.
The transition is reinforced by the highlighting of elements referring to a recent past, which are illustrated such as, the old wooden wheelbarrows, the cart drawn by horses, the masts letting guess the moored barges, in opposition to the steamboat that highlights sign of the new modernity.

The artist was careful not to show any humans in the painting, but nevertheless describes human influence on the landscape and the indelible imprint left by human activity, by the image of the charcoal smoke escaping from the steamboat’s chimney, rising and dissolving in a sky that already seems heavily laden.
The opposite bank is treated in shades of mauve/pink, as is the grove of trees above the cart which corresponds to the Ile de la Grande Jatte.
The island was made famous by impressionist painters such as Monet, Sisley, Van Gogh, and post-Impressionist painters such as Georges Seurat’s famous pointillist painting “A Sunday Afternoon on the Island of Grande Jatte (Art Institute of Chicago)”.

In his resolutely impressionist style A. Le Petit rendered these effects by small successive touches placed side by side in bright tones. The use of these purplish hues is undoubtedly the result of the influence of Albert Lebourg, who was one of his mentors in his early years.
By playing with the different tones, Le Petit was able to create relief and perspective without actually drawing the contours.

We found an old period photograph of the Port of Levallois that we are including in our photos!

Born in Fallencourt in 1876, Aldred Marie Le Petit was a student of Fernand Cormon and Léon Bonnat.
He exhibited at the Salon de la Société Nationale des Beaux Arts and at the Salon des Indépendants.
He died in 1953 in La Frette sur Seine.

This oil on panel is signed in lower left hand side, located, and dated to 1897 on the back.
The Gilt wood frame dates to the end of the 19th century.
The Panel measures 12 x 18 inches
The Gilt wood Frame measures 19 x 24 inches