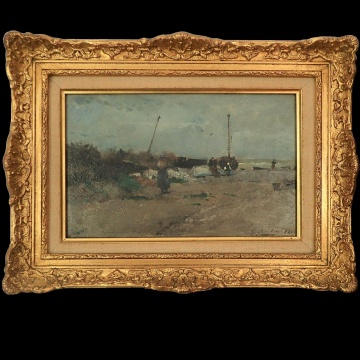 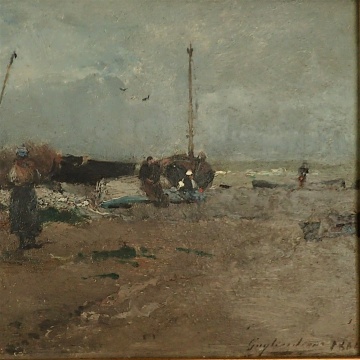 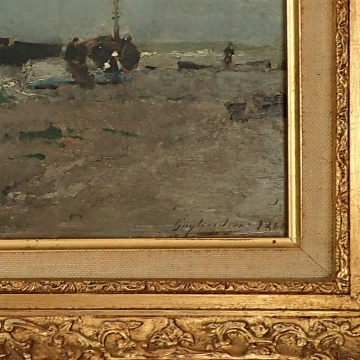 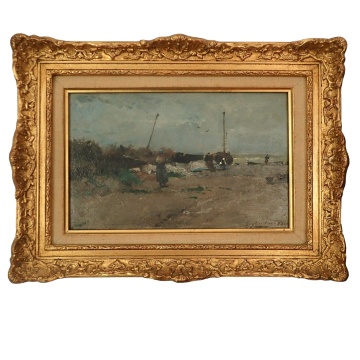 The Return of the Fishermen by Julien Gustave Gagliardini

An Oil on Panel of the Return of the Fishermen by Julien Gustave Gagliardini.

Gagliardini (1846 Mulhouse -1927 Paris) was a French Impressionist and landscape artist who specialized in picturesque images of France, Gagliardini was several times a prize winner in the Paris Salons and was made Chevalier of the Légion d’honneur in 1893.
His paintings can be found in the Louvre and other French museums, as well as in the Indianapolis Museum of Art.
The son of a peintre-decorateur, Gagliardini saught inspiration in nature.
Gagliardini’s family was originally from Italy.

He began as a student of the history painter, Claude Soulary, then worked in the studios of Leon Cogniet at the Ecole des beaux Arts in Paris.
His first exhibit at the Salon des Peintres came in 1869, with a series of genre scenes and portraits.
By the 1880s, he had abandoned those subjects and was devoting himself entirely to landscapes.
He quickly developed a preference for the Auvergne area and the south of France; areas that would remain his favorites for the rest of his life.
While working there, he became a close friend of Francois NARDI, another French artist of Italian ancestry, who encouraged him to use the original form of his family name.
He benefitted from several major government purchases, in 1880, 1891 and 1913. After being awarded several second- and third-class medals, he was the recipient of a silver medal at the Exposition Universelle De Paris in 1889, and a gold medal at the Exposition Universelle de Paris in 1900. He was named a Knight in the Legion Of Honor in 1893.

In this Oil on Panel painting, Gagliardini pictures the return of the fishermen in Brittany, with the women wearing the traditional bonnet and long skirts, coming to help haul away the day’s catch.
The sky is typical of the coast in autumn showing darkening clouds.
The painter signed in the lower right hand corner and dated his work 1862.
The Gilt wood frame is a period one, called in France a Montparnasse Frame.

Gagliardini is listed in the Dictionnaire des Petits Maitre an in the Benezit Dictionnary.
Gagliardini’s art is best translated by this quote from the Artist:
‘J’ai toujours vu la nature limpide et frâiche, sonore et vivante. Il faut rendre cette frâicheur, il faut rendre cette vie…C’est plein d’énergie et de souplesse que le pinceau doit conduire le ton et ce dernier doit être franc.’
‘I have always seen nature as limpid and fresh, sound and alive. It is necessary to render this freshness, it is necessary to render this life… It is full of energy and flexibility that the brush must lead the tone and this last one must be frank’