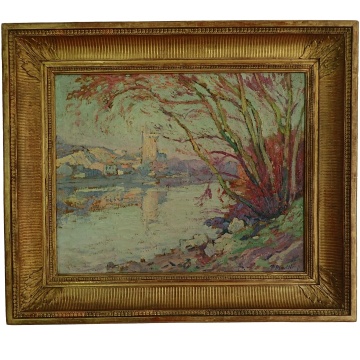 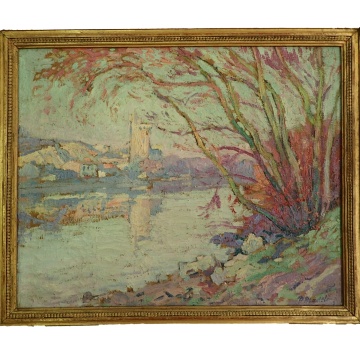 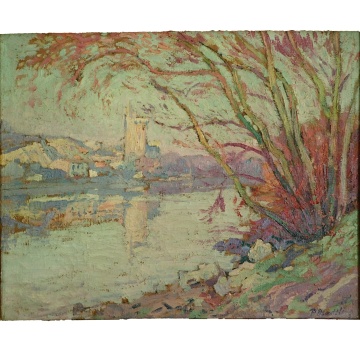 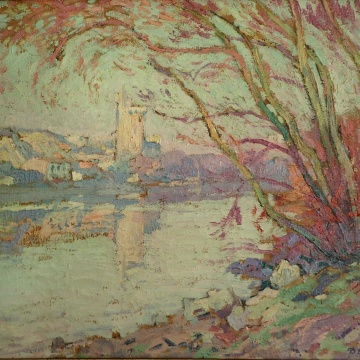 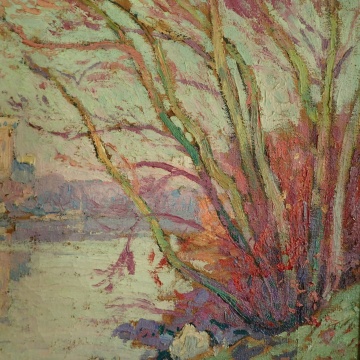 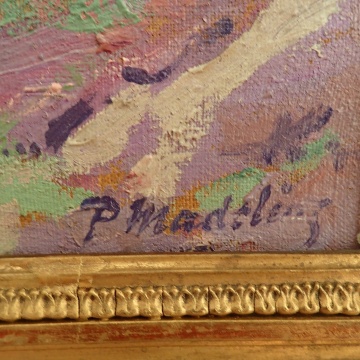 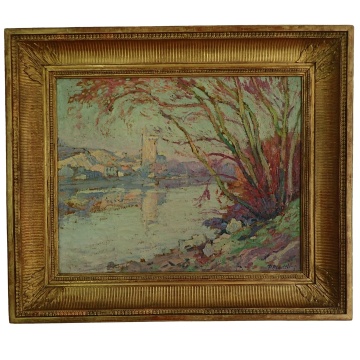 The Rhône River in Avignon By Paul Madeline

A Beautiful Oil Painting on Canvas Of the Rhône River in Avignon by Paul Madeline.

Born in Paris in 1863, Paul Madeline grew up inspired by the work of the impressionist and post-impressionist masters, Monet, Pissaro, Sisley, Seurat…
While studying at the Ecole des Beaux-Arts in Paris, he worked in a publishing house to support himself and painted in his spare time.

In 1894, at the home of Joseph Montet, his friend and editor at “Le Gaulois”, Madeline met the poet Maurice Rollinat and the painter Léon Détroy, both of whom lived in the Creuse valley.
This meeting was to be decisive in the career of the young painter, who went to Crozant that year for the first time and met the master of the place, Armand Guillaumin.
Under his influence, Madeline composed landscapes of unprecedented sumptuousness, handling his brush with vigor and spontaneity.
His palette was enriched with new, more daring tones, dominated by pinks, bluish tones and amethysts in response to the cameo of greens.
He became one of the main members of the Crozant school.

He exhibited at the Salon des Artistes Français in 1894, 1897 and 1899.
Later, he was named a permanent member of the Salon d’Automne, as well as the Salon des Beaux-Arts, the Historical Salon of the ‘Société Nationale des Beaux Arts’.
The success of his exhibitions allowed him to live off his art starting 1902.
In 1908, he created “La Société Moderne”, which included painters such as Lebasque, Raffaëlli, La Villéon. The Devambez and Durand-Ruel galleries were invited to their annual exhibitions.
He died at the age of 57, on February 12, 1920 in Paris.
The Salon des Indépendants devoted a retrospective exhibition of his paintings in 1926.
Paul Madeline travelled all over France and painted many landscapes, with the subtle impressionist delicacy that allowed him to tame, with his technique and colors, a sometimes wild nature.

Our painting is an oil on canvas, in an excellent state of conservation, presented in a period gilded wooden frame.
It bears on the back an old label from an exhibition at the Salon d’Art Français with the number 379.

This magnificent interpretation of the Rhone in Avignon immerses us into the world of Paul Madeline and his sense of color, his magic touches used to convey his vision of the landscape.
Approaching his subject with infinite sensitivity in the amethyst tones that he is so fond of, he lets each brushstroke appear on the canvas, playing with the different thicknesses of material to create more effect and relief.
The composition is quite unusual with a foreground that occupies the right part, forming a triangle, from the upper left corner to the lower right corner of the canvas, with the riverbank and a copse of trees that blocks the vision and brings the eye back to the center on the tower “Le Bel” and its reflection in the waters of the Rhone.
The opposite triangle, on the left side, is mainly composed of the waters of the river, a small part of the bank and the surrounding hills.
The two banks reflect their mauve/pink tones, just separated by the blue ribbon of the river.

A very beautiful work, full of assurance and mastery by Paul Madeline, with its lovely harmony of colors, a true ‘coup de coeur’.
The canvas is signed in the lower right corner.