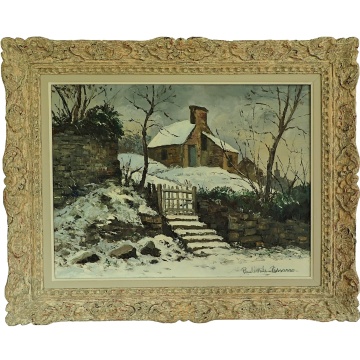 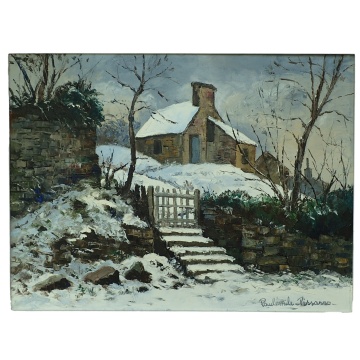 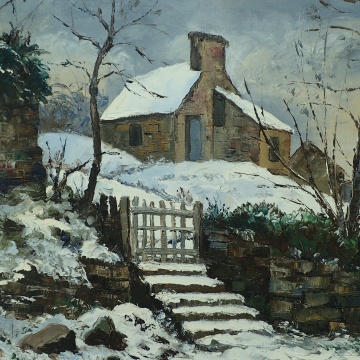 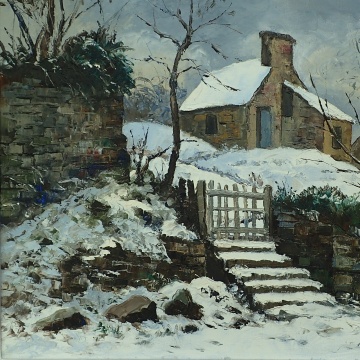 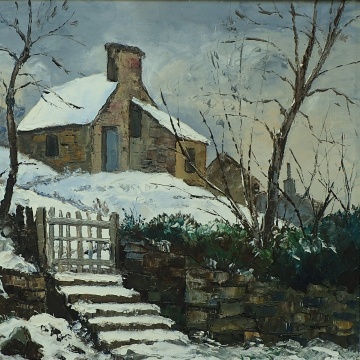 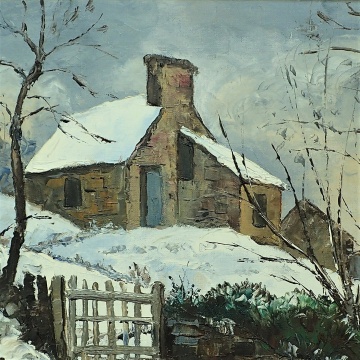 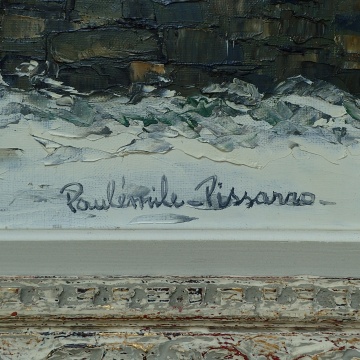 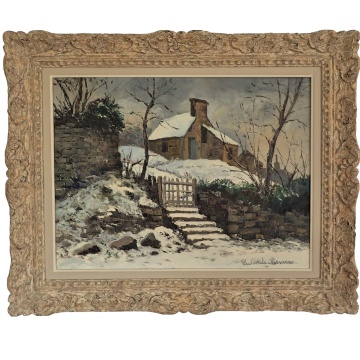 The Shanty Of The Havrais In Clécy by Paul-Émile Pissarro

Born in a family of eight children, he was the last of the five sons of Camille Pissarro, famous impressionist painter, friend of Monet, Cézanne, Gauguin…
Paulémile was raised in an artistic environment where his father encouraged him to draw.
At the age of 15, he was invited to follow his father on an initiatory artistic trip to Normandy.
He was then enrolled in a private art academy in Paris.
In 1903, when his father died, Paulémile was 19 years old and returned to live with his mother in Eragny, 30 kilometers from Giverny where his godfather Claude Monet, lived.
Claude Monet became Paulémile’s tutor and friend and gave him lessons in painting and horticulture.
It was in 1905 that the young Pissarro exhibited for the first time at the Salon des Indépendants, unfortunately, like many young artists, his talent was not immediately recognized.

The following years were difficult, he had to work in the factory to survive. His brother Lucien Pissarro, who lived in London, asked him to send him some works.
Because of the success of the sales of these paintings, Paulémile decided to devote himself to his passion.
During the war of 1914, he was not mobilized because of his poor health, which allowed him to travel and paint, affirming more and more his style.
With the help of his brother he exhibited in London, at the New English Art Club, the Baillie Gallery and the Allied Artists Association.
The influence of Paul Cézanne is evident in Paulémile’s painting. His father used to tell him “If you want to paint, look at Cézanne”.
It was in the 1920s that Paulémile became a post-impressionist artist. He asserted his own style and abandoned his palette of nuanced impressionist tones for sharper colors, he used the painting knife more; his brushstrokes were wider and more confident.
In 1930 he visited for the first time a region of Normandy, called “Suisse Normande”.
He fell in love with this region of Calvados and the river Orne which flows there.
He bought a house in Clécy in 1936 and stayed there until the end of his life.
In 1967 Paulémile exhibited individually for the first time at the Wally Findlay Galleries in New York. This led to the spread of his fame to a degree of professional success that few artists of the Pissarro family had in their lives. Since his death in 1972, his paintings have been exhibited in France and elsewhere, and interest in his work continues to grow.

It is not surprising to be able to see this admirable “snow effect” of Paulémile Pissarro, since his father Camille and his godfather Claude Monet were the two impressionist painters who produced the greatest “snow effects”.
Remember that these paintings are made “on the spot”, that is to say in “plein air”.
Remaining motionless for several hours, staring at the subject on the canvas in conditions that one can imagine being difficult to bear, with their feet in the snow, the biting cold enveloping their bodies and numbing their fingers, these artists needed boundless determination to produce these works and to transmit to us these moving testimonies of their passion.

This work is signed on the bottom right, as well as on the back and titled and located on the back, directly on the canvas “La bicoque du Havrais à Clécy”.
The artist planted his easel below a knoll where this abandoned looking shanty with its closed shutters is located
No human presence is represented, as if to emphasize the isolation and solitude.
In the foreground are two thick dark stone walls, which contrast in color with the snow covering the rest of the landscape.
The two trees standing out against the snowy sky increase the effect of depth.
The fragile wooden gate at the top of a flight of stairs draws the eye to the center of the canvas, almost making us think that it is the main subject, but it is to better guide our gaze towards this frail hovel with its gray door.
The bluish-gray tones so present in the snowy atmosphere are rendered with extreme accuracy. The tormented sky retains its threatening aspect, the snowy slopes are covered with pearl gray where the bushes and distant houses are darkened and adorned with shades of mauve.

The mastery of this execution lies in the use of the painting knife, which allows us to guess and follow the movements of the painter and the application of his colors. Sometimes spread in thin layers with long and smooth flat tints, to give more softness, sometimes applied in short touches, close together, in thickness to create more relief and breathe more energy into the composition.

A majestic canvas by Paul-Émile Pissarro, at the peak of his art, in his assertive and confident post-impressionist style.
Oil on canvas in a Montparnasse frame also original.