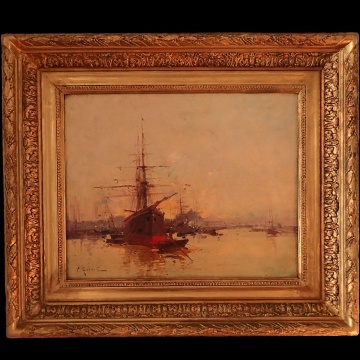 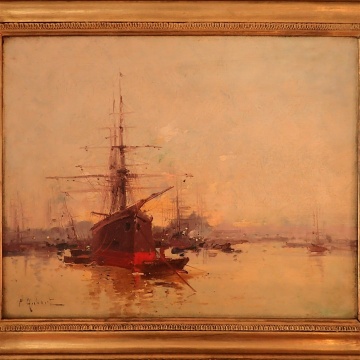 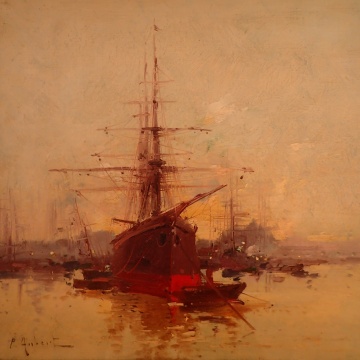 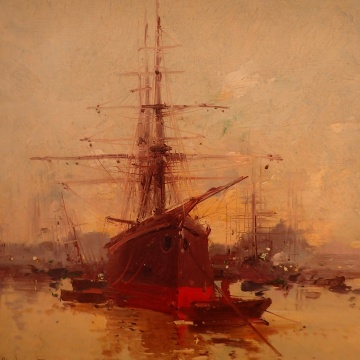 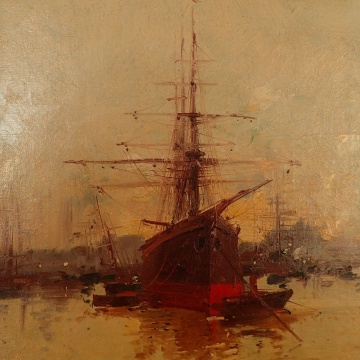 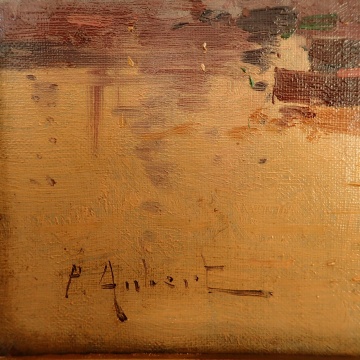 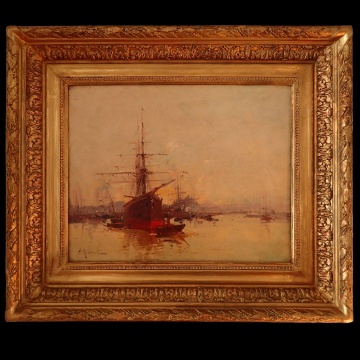 A Beautiful Rendition of a Cargo Ship In Le Havre Harbor, By Eugène Galien Laloue
In this representation of cargo ships moored in a Normandy harbor, which is certainly that of Le Havre in view of the number of ships represented,
the artist has rendered with extraordinary skill the specific atmosphere of morning mist under a veiled sun.

Le Havre was one of those ports that benefited from the shift of exchanges from the Mediterranean to the Atlantic.
In addition to keeping a fishing activity, it emphasized commerce and became a pole of departure and arrival of numerous commodities.
Emigrants to America gained days at sea compared to departures from Genoa or Hamburg.
The flow of expensive but light products fed a large international market specializing in tropical foodstuffs.
Traders brought them from all over the world to redistribute them, by coastal shipping and soon by rail, throughout France and Europe.
The need to store and preserve this amount of goods justified the creation of specific buildings, the docks.
At the same time, the city grew in size and population (20,000 people in Le Havre in 1800, 120,000 in 1890), and then acquired industrial facilities linked to the port, such as the shipyards.

The spectator can feel in the background the damp early morning, where the shapes are still indistinct, and where the last lights of the night are progressively extinguished by a shy sun which warms the air and proceeds to slowly evaporate this misty veil.
In the foreground, the main subject, advances its bow and proudly raises its masts. The waterline, treated in bright red to better catch the eye, is far above the water indicating that the boat is empty. Moreover, no human presence is represented, time seems to be suspended as if awaiting an awakening.
The shimmering of the water, just disturbed by small waves on the surface, confirms the absence of activity in the port.

The composition of the painting is made to capture the first glance in the busy left diagonal part and let the gaze sail freely to the right where the distant horizon seems to lead to the open waters.
The treatment of this canvas is typical of that used by Eugène Galien-Laloue, the fineness of the drawing of the masts, the anchoring of the gaze on the hull of the ship with a vivid color, the misty atmosphere rendered in these yellow tones.
Similarly, the calligraphy used for the signature is the same as for his other pseudonyms.
We can attribute this painting, rather certainly, to Eugène Galien-Laloue (1854 Paris, 1941 Chérence), despite the Pseudonyme used here of P Aubert.

As noted by Noé Willer in the Catalogue Raisonné retracing Galien Laloue’s life , ‘Le Triomphe de PARIS’ :
“There are some painters who are easier than others to define, Eugène Galien Laloue is particulary difficult in this regard.
I know of no other artist who worked under so many pseudonyms.
Eugène Galien Laloue contributed to this confusion himself, covering his tracks well, perhaps because he had an exclusive contract with a major gallery?”

Willer goes on:
“After long and tedious research into various administrative and civil records, regional and national archives, museums, salons and exhibitions catalogues we can today confirm that J. Lievin, E. Galiany and L. Dupuy are all pseudonyms used by Eugène Galien Laloue.
He may have used upon occasion other names, as well.

‘There are also mysteries about his name itself. He signed “Galien” with one “L”, but there are two “L”s in many of his official papers.
Was Galien his first name or his family name? In fact, on his birth certificate in the city hall of Montmartre, Gallien (with two”L”s) is listed as his second name, though it is known that Galien Laloue’s father was Charles Laloue, a set designer.
Surprisingly, many reference books of the time list Charles Laloue as the artist’s uncle.’
When his father died, Eugène Gallien Laloue- the oldest of nine children- was only 16 years old. His mother, Endoxie, found him a job at a notary and he had to leave school.
Eugène however felt the calling of his country at the start of the Prussian war, thus leaving his job, faking his age and enlisting in the army.
By the time he had returned home from the Prussian war it seems that his vocation as a painter was already a fact.
Upon his return to civilian life, he was employed by the railroads as an illustrator. His role was to paint the railroad tracks between Paris and the provinces.
At the same time, he painted the surrounding countryside, carefully choosing the season and time of day.
Interestingly, while later he preferred painting Paris in the Fall or Winter, taking advantage of the water puddles to reflect the city lights, his Countryside painting always reflected Spring or Summer, full of warmth and tranquility….
His training appears to us as most original, more practical than theoretical, for a young artist. It seems that he learned his art in a more academic way from a certain Mr. C. Laloue, probably his uncle.
In 1876, he exhibited for the first time at the Museum of Rheims, “Le Quai aux Fleurs par la Neige”.
The following year he participated in the Salon des Artistes Français where he presented two gouaches and an oil painting “En Normandie”. From 1877 until 1914, Galien Laloue was present every year at the Salon apart from 4 years between 1898 and 1903, due to the birth of his daughter.
Galien Laloue was rather reclusive, preferring to work in the solitude of his studio and rarely painted from life. His views of cities or provincial landscapes were usually based on postcards or photographs.
His stern personality kept him from mingling with other painters that worked in Paris.
As best expressed by Noé Willer in the Catalogue Raisonné:
“…He was not eccentric but always conservative, practically a royalist. He was obsessed with his painting. In his private life he found simplicity alluring: he married three sisters, one after the other (beginning with the youngest and ending with the oldest). They had all lived next door to him. He lived a monastic life. All worldly pursuits, games, alcohol, the pleasure of the flesh were not for him. Riding his bicycle to places in Paris to paint was his only physical exercise…”
Though he painted Paris all his life, it was not always known that only sketches were done on site. He would then return to the solitude of his studios and ask his family to pose in costume for all the rest, shunning the long hours ‘in situ’.
However, the fame of his views of Paris should not make us forget that he was attached to other subjects. He also painted beautiful landscapes of Normandy, including its harbors, and the surroundings of Barbizon and the forest of Fontainebleau.
In his tiny gouaches Galien-Laloue rendered every detail of fin-de-siècle Parisian architecture with absolute precision, but in his landscape works he was more attuned to the painterly tradition of the Barbizon School and the Impressionists, recording life in the rural French countryside in light-filled canvasses.
While Paris was undergoing its transformation into the City of Lights due to the extensive renovations going on in the 1870 under the Baron Haussmann, many people travelled to the Capital in search of work and relished its lights and the excitement of its novelties.
Yet many as well regretted the more tranquil lifestyle they had left behind.
Paintings depicting rural landscapes hence became popular and Galien-Laloue and the Barbizon painters of the time filled the void in the market for those people who wanted a landscape painting to remind them of the peaceful serenity of nature they had left behind.
By specializing in both ‘genre’ Galien-Laloue had in essence, cornered both markets.
Galien Laloue exhibited his paintings in most French cities, Dijon, Orleans, Versailles, Roubaix, Saint Etienne, Bordeaux, or Monte Carlo.