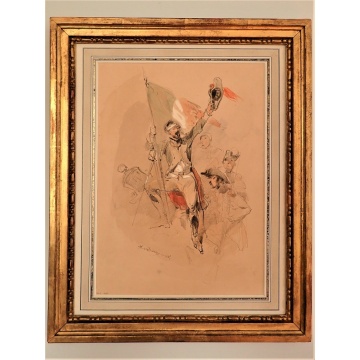 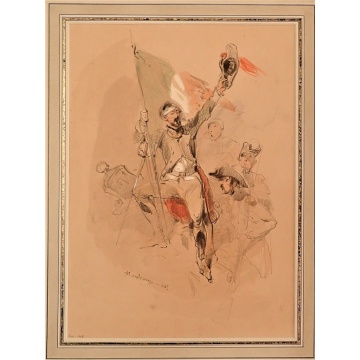 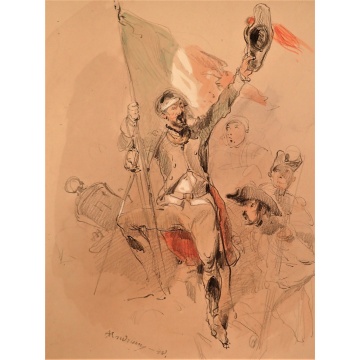 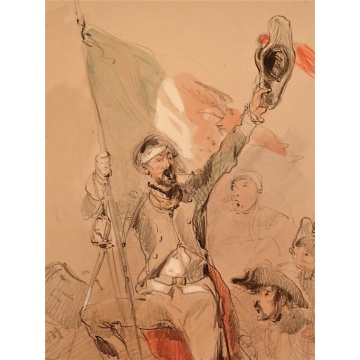 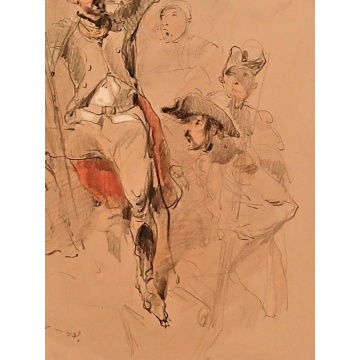 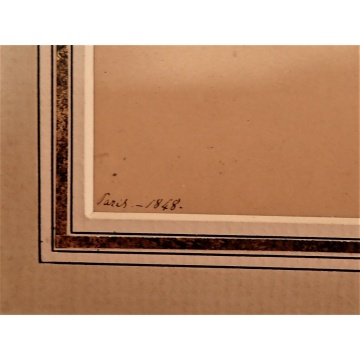 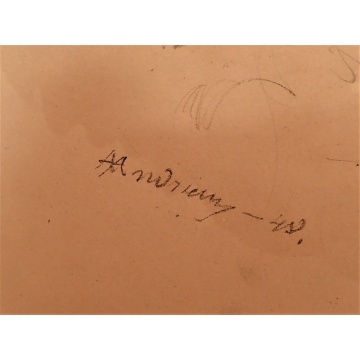 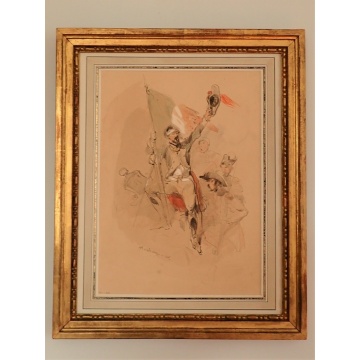 Watercolored Drawing Of the Revolution Of 1848 By Andrieux~Sold~

Watercolor and Lead Pencil Drawing of the French Revolution Of 1848 by Clément Auguste Andrieux.
A very lively scene depicting the rise of Paris in 1848, and the militia.

Clément Auguste ANDRIEUX was born in Paris on December 7th 1826 to Belgian of origin parents.
A painter and draughtsman he started to study in Paris and exhibited starting the 1850s at the Salon in Paris then went to study for some years in Liege, before coming back to Paris to study under William Adolphe Bougereau in 1867.
During the Franco Prussian War of 1870-1871 he was employed by Le Monde Illustré to report on the conflict and made more then 30 sketches illustrating the Siege of Paris.
Andrieux made a specialty of battle scenes, illustrating above and beyond the Franco Prussian war, the 1848 Revolution, several Napoleonic campaigns and the Crimean War.
One of his most famed works during his lifetime was a painting on the Capture of Sebastopol.
He was also considered as an accomplished watercolorist.
He passed away in 1880 leaving a young son behind.

In our drawing he depicts a scene of the 1848 Revolution often called in France ‘La Révolution de Février’.

The Revolution of 1848 were in effect a series of uprising against monarchies, that began in Sicily, spreading to France, Germany and the Austrian Empire.
While they failed in the remainder of Europe, the 1848 Revolution partially succeeded in France, sending the King in exile and bringing about the 2nd Republic. Yet unrest remained and the Revolution brought about the rise of the Liberals and Communist, known in France as the Communard.
But the government in place feared more disorders and by May 1848 the Communard leaders had been imprisoned. It would lead only to a greater upheaval in the following month, bringing the Law and Order which controlled the National Assembly to decide on the annihilation of the Communist faction.

The insurrection of May 15th was only a prelude to the great Communist Rebellion of June 1848. Fearing another demonstration on an extensive scale, the Government made the necessary preparations to meet it.

By June 22nd large crowds had collected at the Hotel de Ville, Place de la Bastille crying for the downfall of the Republic. The Following morning numerous barricades had been erected in various portions of the city. On the 24th the government turned 300,000 troops onto Paris declaring it under siege. The crowd of more than 120,000 consisted not only of men but also children and women, who came to the insurgent’s aid waving flags. The artillery was given the go ahead and the battle raged for the better of 2 days, killing some 25,000.
One fourth of the city lay in ruins. Thus, ended the great Rebellion of the Paris Communists in June, 1848. Never before had Paris witnessed such slaughter as during these four sanguinary days.

A few months later in November a new constitution was voted in giving France a Republican form of government.

Our watercolor is signed by Andrieux in the center under the main figure.
It is dated on the left hand lower corner, Paris 1848.