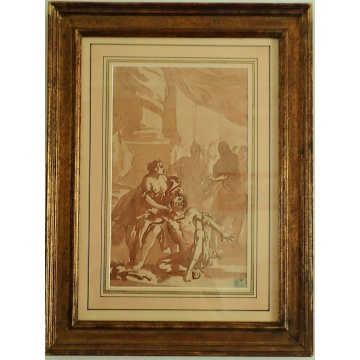 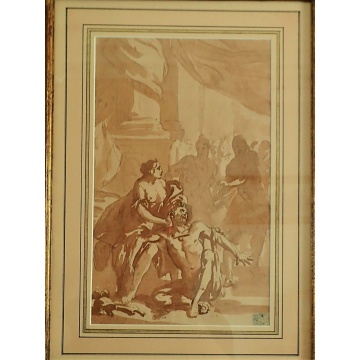 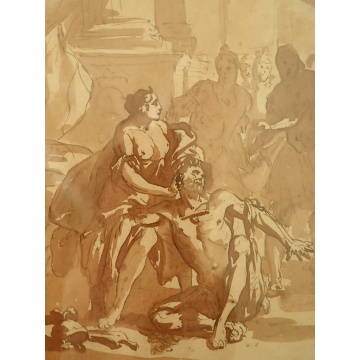 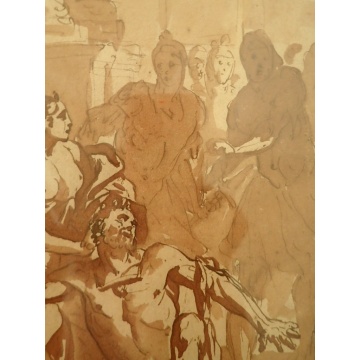 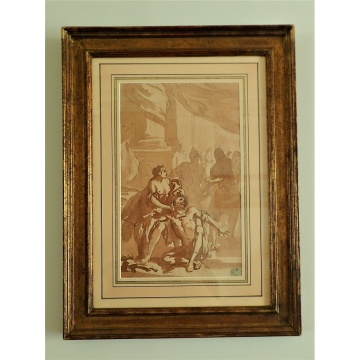 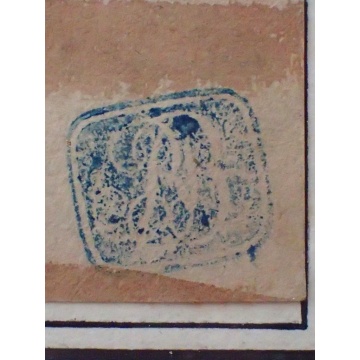 This well executed Brown Wash Ink is the work of Jean Baptiste Louis BONNEJOY an artist who worked mid to late 1800s in Lorraine.

The theme chosen portrays Samson and Delilah in the front of the Philistine temple.
The story is recounted in the Jewish Bible (Book of Judges) and tells about a young man born to the Israelites who had been selected by God to liberate the tribe from the Philistines.
Samson was endowed with great strength which resided in his long locks of hair which he was never supposed to cut, a secret crucial not to reveal.
After first marrying a philistine woman who betrayed him, he later in life after acquiring a higher statut amongst the Israelis, fell in love with a woman called Delilah. Delilah is the only woman named in the biblical text.
The Philistines elected to bribe her to find the secret behind Samson’s strength and get the better of him.
After failing three times to discover his secret, she finally managed to coaxed it out of him on her fourth try.
She subsequently had her servant cut his hair and sent word to the Philistines so they could come and take possession of him. They proceeded to blind him and tied him in their temple between 2 pillars.
Samson prayed to God to give him his strength back one more time and pulling on his restraints brought the temple down on his aggressor, thus ridding the Israelis of the oppressors’.

The strokes are powerful and portray Samson reclining in the foreground in front of the temple while the Philistines Soldiers gather behind him. The work is full of movement and life.

The work has a collection Stamp on the right hand side.
The Stamp shows JBB initials. They were used by Ernest BONNEJOY who was a doctor as well as a well know collector from 1833 to 1896 to register the drawings done by his father Jean Baptiste Louis BONNEJOY.
Bonnejoy worked as an illustrator and painter in the later part of the 18th century. His work can be found in the Musee Lorrain in Nancy.
His son was a well known collector in his later years and registered this particular stamp to document his fathers work.