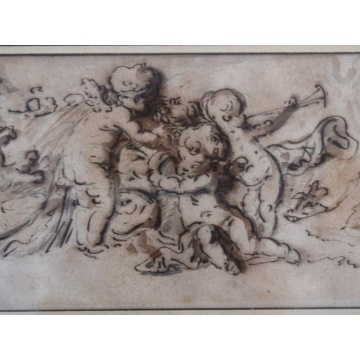 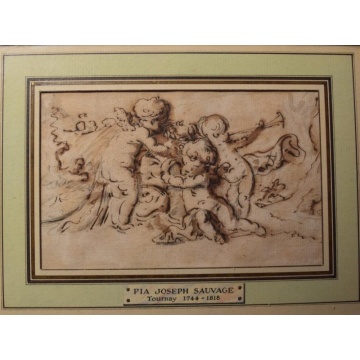 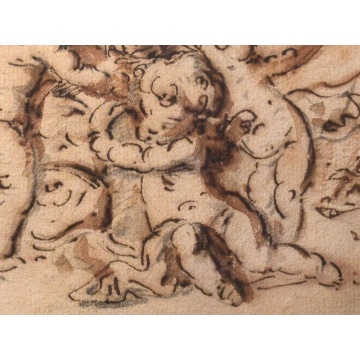 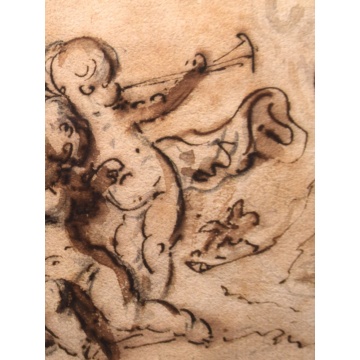 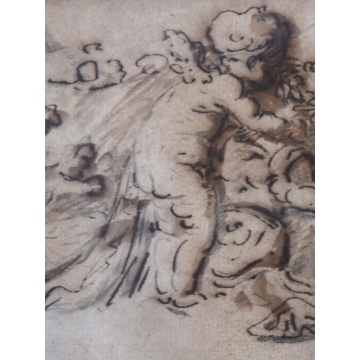 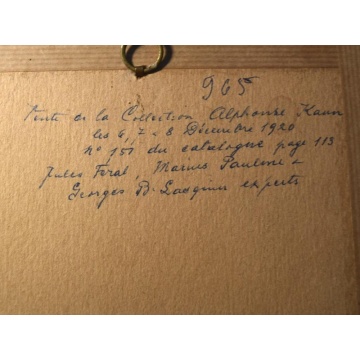 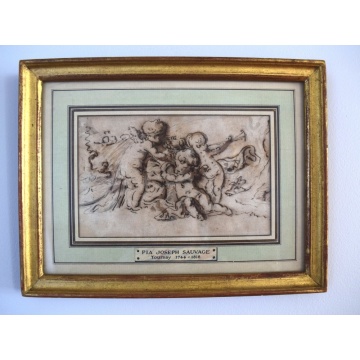 A Charming Ink drawing of three ‘Putti’ playing music and dancing by Joseph Sauvage PIAT or PIA.
Beautifully drawn in simple ink they show chubby cheeks and cute wings, while gathered among clouds.
The drawing shows a perfect mastering of the depth or 3D aspect, using white highlights as well as brown ink washes to achieve the desired effect.

Joseph Sauvage PIAT (or PIA) was born in Tournai in 1744.
Born into a glass maker’s family Joseph Sauvage worked in his family’s company until he was 17 years old, while perfecting his talent for drawing at the Tournai Drawing School.
In 1761 he would go on to complete his training at the Royal Academy of Art in Anvers under the Master of ‘Grisaille’ style Martin Geeraerts.
By 1774 he had moved to Paris and was admitted at the Saint Luc Academy in Paris.
He would go on to exhibit along with the school and would be the first foreigner to join the Academy of Fine Arts in Lille.
By 1783 he was received as a member of the Royal Academy In Paris after exhibiting a painting that is still today displayed in Fontainebleau.
His stellar reputation and excellent drawing soon promoted him to First painter of the Prince de Conde’s household, then enabled him to gain the same position with the royal household of Louis XVI. One of his best achievements is a portrait of Marie Antoinette.
His position in the royal household did not deter him from adhering to the French Revolution, from which he escaped unscathed.
Between 1804 and 1807 he would work with the Manufacture de Sevre as a portrait painter.
In 1808 he was called back to Tournai, then under French rule, to direct the Academy of Art and Drawing.
He passed away in Tournai, nine years later.
Piat’s drawings were particularly recognized for the ‘3-D’ aspects he gave them by using Ink and washes of different colours to add depth to his subjects.

The ‘real’ particularity of this charming drawing resides in its provenance.
This lovely drawing was first acquired by Alphonse Kann.
Alphonse Kann was a prominent French Art collector of Jewish heritage, who was also a childhood friend of Marcel Proust who incorporated several of Kann’s features into Charles Swann’s character for his book Swann In Love.
Kann, born in 1870 was known for his incredible Fine Arts collection and his shrewd instinct for the best pieces.
Yet he shocked the Art world in 1920 and then 1927 by auctioning off most of his collection including the works by Bruegel, Fragonard and Tintoretto, in order to concentrate on the acquisition of his new collecting hobby: The 19th Century Art and Modern Art which he went on to collect vigorously over the next decade.
Sensing the arrival of the Second World War, Kann fled Paris for England in 1938 without making an inventory of his collection which was kept at his mansion in Saint Germain En Laye.
More then 1400 pieces were looted in October 1940 by the Nazis, who recorded their theft in a 60 page report…
Alphonse Kann would only be able to recover a small fraction of his collection before his death in London in 1948.

Our charming drawing was part of the Original Sale organized by Alphonse Kann on December 6th, 7th and 8th 1920, at the Georges Petit Gallery in Paris, when he decided to sell his ‘old’ masters pieces in order to turn towards a more modern college.
Our Drawing was listed page 113, under number 157.
The Drawing measures 3.93 inches high x 6.29 width.
The Frame measures 7.48 inches high x 9.44 width.