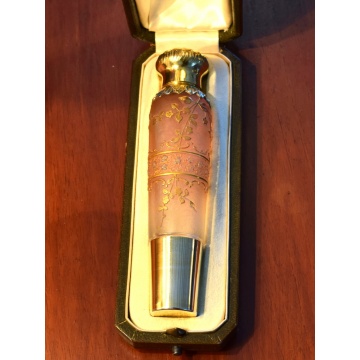 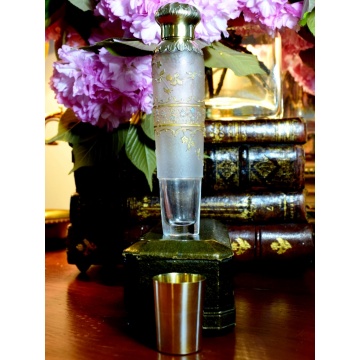 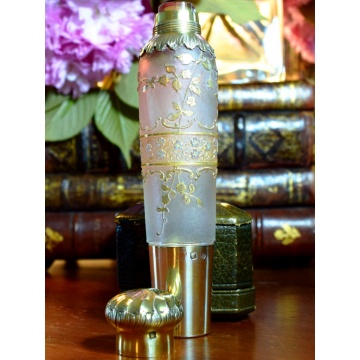 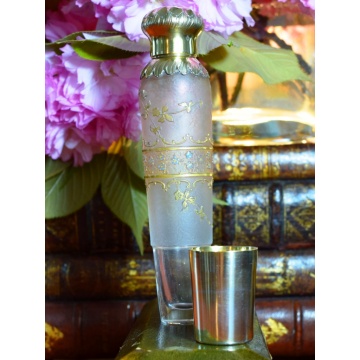 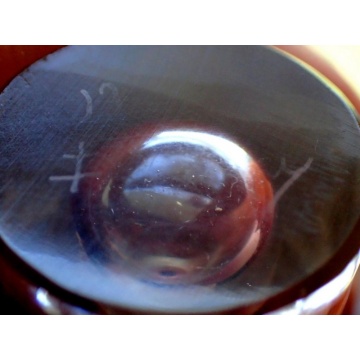 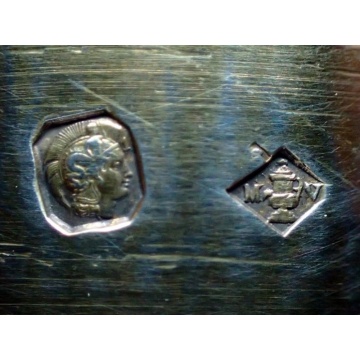 The conical shaped bottle is acid etched with floral motifs of dog roses on a purple and rose background of glass.
The Acid etching method was very much used by Daum in the late 1800s. The technique consisted in applying a mirror image of the motif chosen on the item at hand, and protecting it with wax and turpentine.
The piece as then plonged into an acid bath, which attacked only the parts that were not protected.
The etching thus obtained was then decorated with gold which then required the piece to go through a new ‘cooking’. After each process the piece needed to be polished, with the last polishing taking place with a wool pad.
The removal of minute parts of glass by the acid causes the characteristic rough surface and translucent quality.

While this charming piece could easily taken for a perfume bottle, several things indicates otherwise.
The first one is the neck of the bottle;which is not protected by a second insert which would keep the perfume in, but is rather a twist off cap…making the filling with alcohol a simple task.
The second is the lower part of the bottle which is in Vermeil or 18 carat Gilt Silver; It actually comes off by simply pulling it down and doubles as small goblet…!
A perfectly ladylike implement….!!

This charming bottle comes in its original presentation box and is intact!

The bottom was signed in gold letters –but is rather erased…However still apparent are the D of Daum, the Lorraine Cross, which was its symbol and the ‘cy’ for last two letters of Nancy.
The signature is the one used by DAUM NANCY from 1890 to 1896, then again in early 1900s.
Signing in gold was mostly reserved for the smaller objects, while the larger ones where mostly engraved with the name of the company.

A little history on DAUM is, I think called for.
The original founder of the company was Jean Daum (1825-1885).
He was only the financier of the company when it was known as the Verrerie Sainte Catherine. The company quickly hit hard times and it was Jean Daum who took control of it before it failed. Since Daum was not an artist by trade but a notary and industrialist, this venture was truly a trial by fire.
At the start Daum made mostly clear glass with gold rims to be used while dining.
It wasn’t until the 1890s that Daum began producing what we think of today as “Daum Nancy” glass.
Daum glass is thought to be made by the Daum Freres (brothers). This was not accurate when the company first began operating. It was Jean Daum and his son Auguste Daum, who laid the ground work for Auguste and his brother Antonin Daum, to lead the company in the early 20th century.
All Daum glass was and is still handmade, and at the company’s height of production 400 workers were at the factory in Nancy, France. In fact Daum hired and employed some great artists who would later be famous for their own works, namely the Schneider Brothers. Henri Berge, Bernard Gruber, Eugene Gall, who were key designers at Daum.
Daum was
It took winning the Exposition Universelle in Paris in 1900 for Daum to be awarded a ‘Grand Prix’ medal. Daum glass became more elaborate, acid etching was often combined with carving, enamelling and engraving on a single piece of glass to produce creative glass master-piece
The Daum brothers quickly moved on to become one of the major forces in the Art Nouveau movement, seriously rivalling Galle, so much so that when Émile Gallé died in 1904 they became the leaders in the field of decorative glass.
The golden age for Daum Nancy was likely between 1895 and 1914. This period saw Daum register patents and experiment successfully with construction and decoration techniques that makes their art so unique and highly desirable today.

The 18 carat Gilt Silver Cap is worked in the ‘vagues peignées’ (combed waves) motif and is marked with the Minerva Hallmark for Paris 1838-1929.
The Silver Makers Mark is for Moise VIERNY, a jeweller in Paris.