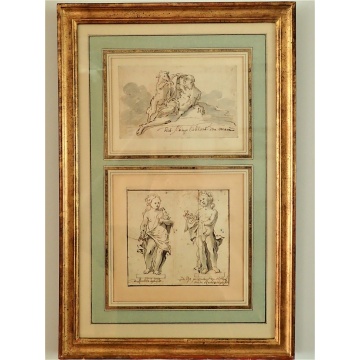 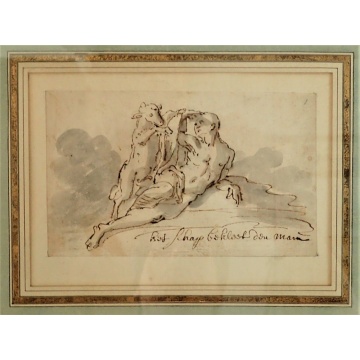 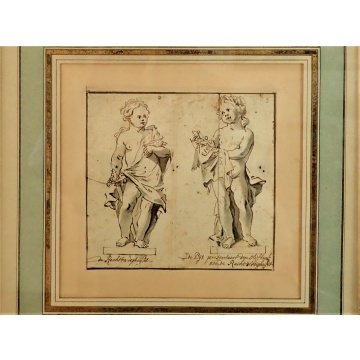 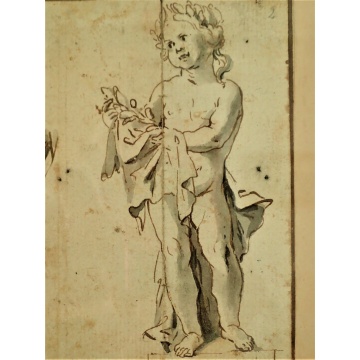 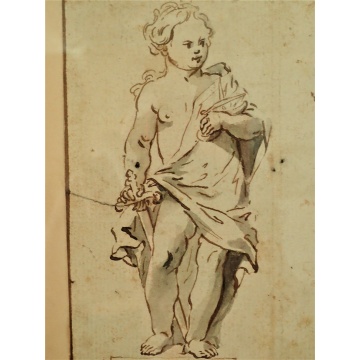 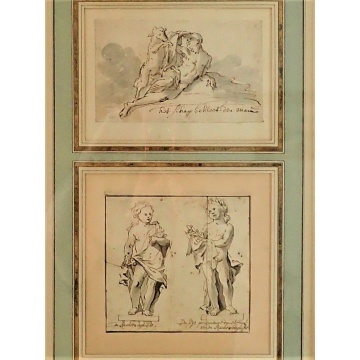 These two charming drawings are framed in a simple ‘montage’ and numbered.
The upper drawing shows a classical man reclining against a mound while a little sheep frolic nearby.
The ink strokes are highlighted with grey wash.

On the second drawing two figures draped in togas seem to be interacting.
One holds a sword, while the second presents Lilies. Once again the main drawing is done in grey and black ink while ink wash is beautifully used to acquire a depth or 3 dimensional effect…

The drawings might have been a presentation project for a house décor, but probably did not belong together…
Both drawings are attributed to Jacob de WIT.
Both feature inscriptions in old Dutch.
We tried to get a translation but are not able to certify it.
The only note that is understandable is on the lower drawing below the figure which holds the branch, where you can read the mention’ Der Lys Presenteer’
The frame is guilt wood, probably early 19th century.

A word about De Wit.

Jacob de Wit, who was baptized in December 1695 in Amsterdam passed away in the same city in November 1754.
A Dutch painter and draftsman he worked primarily in the Netherlands, and was known for his Rococo-style ceiling paintings and masterful grisaille works, some of which could still be viewed in the 21st century in their original locations.
De Wit began his art studies at age 9 as an apprentice to Amsterdam painter Albert van Spiers, with whom he stayed until age 13. He continued his studies with the financial support of his uncle, an art dealer.
De Wit attended the Royal Academy in Antwerp from 1711 to 1713 and in that time honed his drawing skills and began his lifelong study of Rubens, whose works could be found in religious and public buildings throughout that city. Rubens remained the single most influential artist for de Wit. De Wit made copies of many of Rubens’s works, notably Rubens’s ceiling paintings in the Jesuit church in Antwerp now known as St. Carolus Borromeus Church.
His original set of copies was destroyed by fire in 1718, though de Wit made a second, more-finished set that was later reproduced as engravings. In 1713 de Wit joined the Antwerp Guild of St. Luke.
About 1715 de Wit returned to Amsterdam, and in 1716 and over the next few years, he painted several works, including an altarpiece for the Moses and Aaron schuilkerk, an altarpiece titled Baptism of Christ for Het Hart schuilkerk, and a portrait of Father de Glabbais in 1718.
From the 1720s onward, de Wit enjoyed a steady stream of commissions, public and private. He created many ceiling and wall paintings into which he incorporated grisaille, gray and white paintings that give the illusion of three-dimensionality, or bas-relief. He called his grisailles “witjes”—a play on the Dutch word for “white” and his surname. Notable interiors include the Amsterdam Town Hall (now the Royal Palace), which he decorated with the monumental Moses Choosing the Seventy Elders (1737) and some 13 grisaille paintings of subjects from the Bible.
In 1738 he decorated the Alderman’s Hall of the Old Town Hall of The Hague with a ceiling painting framed by allegorical putti (Freedom, Industry, Temperance, and Fortitude) done in grisaille in the four corners. De Wit also realized interior paintings for private residences. Drawings and oil studies for his interiors as well as canvases no longer in situ are found in collections throughout Europe and North America including the Metropolitan Museum and the National Gallery Of Art.

This lovely composition was acquired in Paris in April 2019.