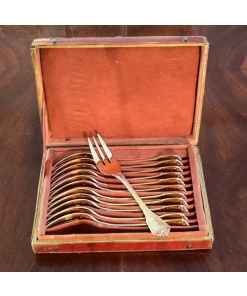 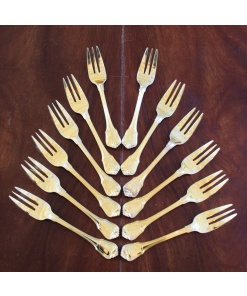 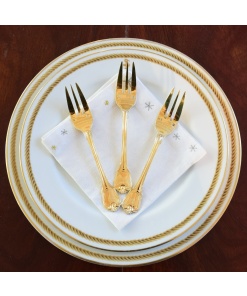 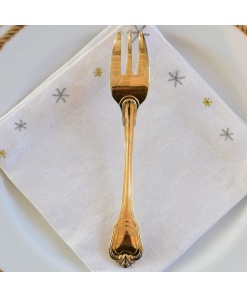 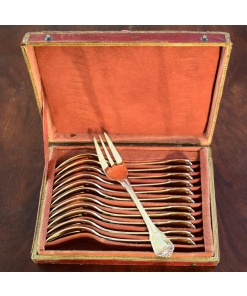 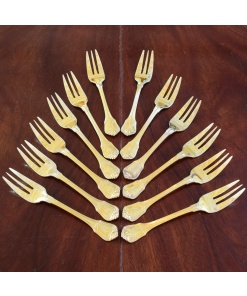 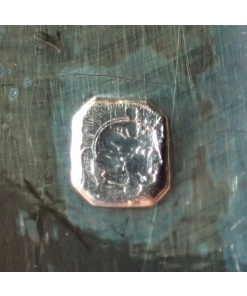 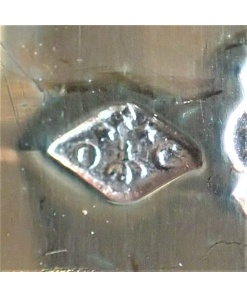 Classical Set Of 12 Vermeil Dessert Forks By Christofle and Cardeilhac

A Classical Set of Twelve French Vermeil Dessert Forks by Christofle in collaboration with Cardeilhac.

These twelve forks are decorated in the Port Royal motif by the house of Christofle, showing a simple double line and a seashell ending the handle.
The quality of the 24-carat gold wash is excellent, and the balance of each fork is perfect!
A lovely set that can be added to any table setting to great effect.

The Makers Mark is for the house of Christofle.
As one of France most well-known Master silversmiths the company deserves a little background….
Charles Christofle was born in Paris in 1805.
The only boy in a family of four, he apprenticed with his brother-in-law Hughes Calmette, a manufacturer of “provincial” copper jewelry in 1821.
He took over the business 10 years later and in 1832 deposited his master’s mark at the Garantie de Paris for “adornment”.

While searching for technical innovations, Charles Christofle took out a patent for the manufacturing of metallic fabrics in 1837. He then produced silver filigree pieces and hangings, epaulettes and braids for the army. Armed with this diverse skillset, he participated in the Exhibition of Products of French Industry in Paris in 1839. This first participation inaugurated a long series of national and universal exhibitions, where the House would win numerous awards. At one exhibition in 1844 in Paris, he received a gold medal.
In 1842, Charles Christofle acquired the patents for silver and gold metal electroplating. More durable and less harmful than traditional techniques, electroplating and gilding made it possible to manufacture pieces on a massive scale. Christofle was the only patent holder in France for 15 years.
The Universal Exhibition of Paris in 1855, the first to take place in France, recognized Christofle’s technical and artistic expertise twice.
Charles Christofle died in 1863 leaving a prosperous and growing business to his son, Paul, and his nephew, Henri Bouilhet.
The House of Cardeilhac whose Mark is also shown on the forks was active until 1951 when it was absorbed by Christofle.
Today Christofle still produces pieces, of which most are plated silver. Here however we have a solid silver set which is lovely!