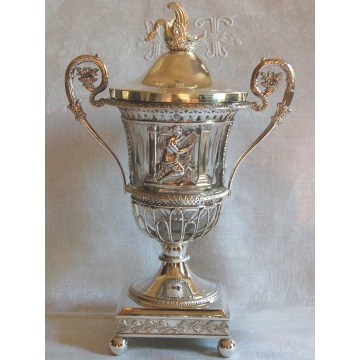 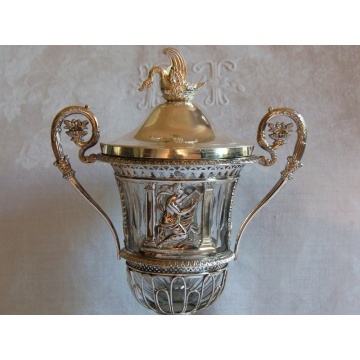 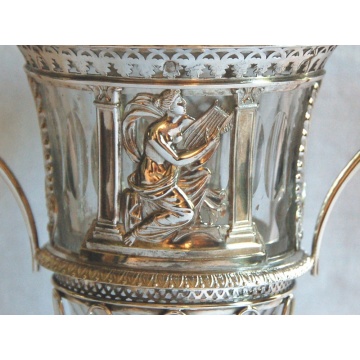 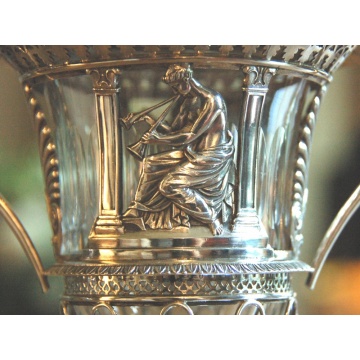 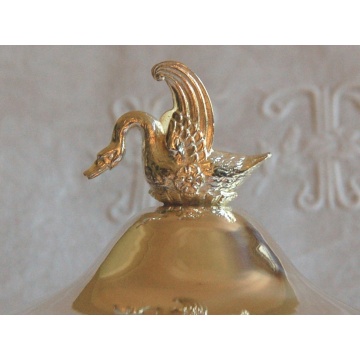 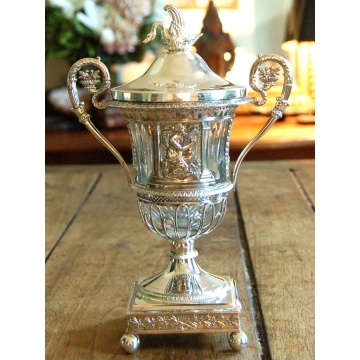 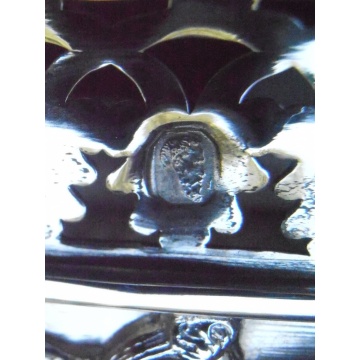 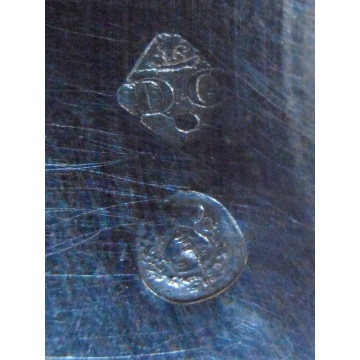 The theme of the Drageoir is based on a Musical Allegory.
The body is Baluster shaped (or Medicis Vase Shaped) with large Palm fronds decorating it on two sides, while the two main Figural ‘Tableaux’ represent a beautiful draped ‘Muse’ (Euterpe daughter of Zeus) playing the Lyra on one side and on the other side playing the ‘Aulos’ or ‘Roman Tibia’ a Double Reed instrument resembling the flute and widely used in the Greek and Roman times.
The Muses are seated on pedestals surrounded by two Corinthian pillars.
The draping of their ‘Togas’ are just beautifully rendered!

The Handles are decorated with palm designs and rosettes and are particularly beautiful with the top part finished by a lovely nesting pair of doves, which symbolised love.
The lower fringe of the piece shows geometric designs widely used by Garreau and Mignerot before him during the Empire Era.
The pedestal is square resting on four round pearls of silver and decorated with beautifully carved olive branches
The ‘Frétel’ (or finial) is exquisite in the form of a Swan stretching his wings and resting on a nest.
The bowl insert is white crystal with ‘facettes’, it is original, and in Perfect shape, with no dents or marks.

This lovely piece is exceptional! A beautiful find!

The lenght given above is taken at the handles.

The Makers Mark is that of Denis GARREAU. It shows a D and a G topped by a ‘Navette’ (or boat) with a dot (reserve) underneath.
Garreau was the successor of Ambroise MIGNEROT and specialized in larger decorational pieces (called in French ‘Pieces De Forme’), particularly “Drageoir’s” and Oil and Vinegar Cruet stands. His mark was created in 1817. His offices were located at 62 Rue du Temple in what is today the Marais area of Paris.