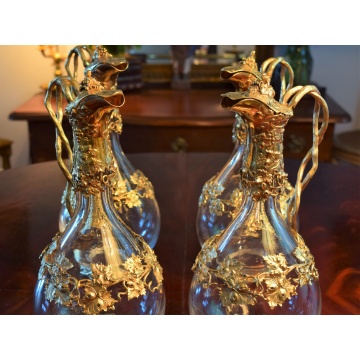 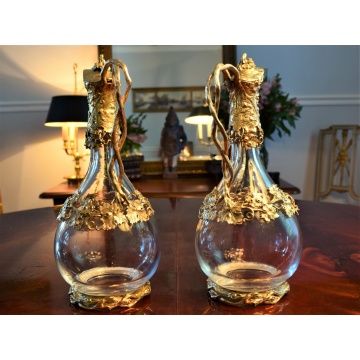 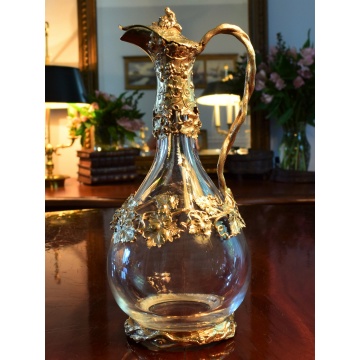 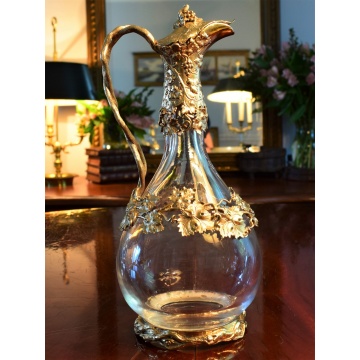 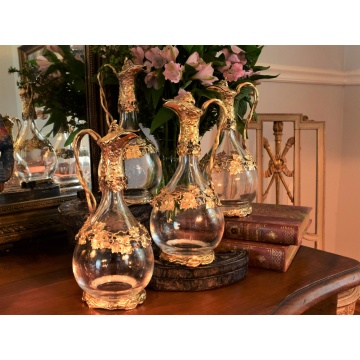 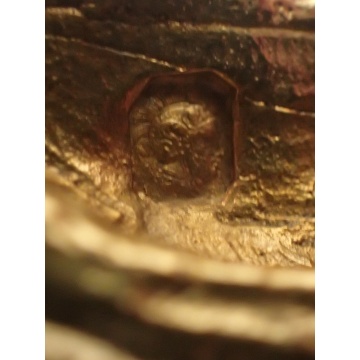 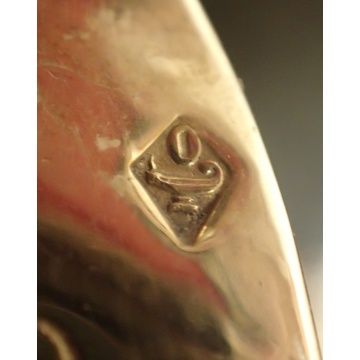 Exquisite Set Of 4 Vine Decorated French Gilt Silver, or Vermeil Ewers by Odiot.
This exceptional Set of 4 French Silver and Glass Ewers show a beautifully chased décor of grape vines and grapes winding around the bodies of the Ewers and enclosing the upper part as well as the forming the lid of each ewer.

The pedestals are decorated with vines which also form the delicate handles. The lids are topped by a lovely grape cluster. The workmanship is exquisite! Typical of Odiot’s wonderful and masterful work!
The bodies are made of thick glass and are in perfect shape.
The 18-carat gold on the silver is intact.
Truly an amazing set!
A grand way of celebrating the holidays with your favorite wines!

The Makers Mark is for the House Of Odiot.
The House of Odiot is one of the most remarkable Dynasties of Silversmiths in France, starting with Jean Baptiste Gaspard Odiot, and more particularly under the wonderful talent of Jean Baptiste Claude Odiot.
Jean Baptiste Claude was received Master in Paris in 1785 and his mark was cancelled in 1809.
Jean Baptiste Gaspard ODIOT was the creator of the family business in 1650 and was a Silversmith to Louis XV.
After the father’s death in 1788 Jean Baptiste Claude ODIOT had to face the hardship of the revolution years, and was so much impacted by the revolution and the law banning exportation of silver items in 1792 that he had to join the army until 1801. He then re-ignited his career and went on to become Napoleon’s favorite Maître Orfevre (along with Biennais). He created the Coronation Sword and Scepter used by Napoleon. He was also the maker of the Silver and Gold service used by the Imperial Family and even created the Imperial Cradle for Napoleon’s son (the King of Rome), as well as Napoleon’s campaign dinner service.
As one of his first assignment he was mandated by Thomas Jefferson to create several pieces. He went on to acquire an amazing reputation and received special orders from all the European Courts as well as those of the Middle East and India. He was succeeded by his son, then his grandson with the final direct descendant Gustave ODIOT creating a joint company with 2 other ‘Maitres Orfèvres’ in 1906.
During all the successions, what made the ODIOT Name a household name was the amazing talent they possessed that enabled them to be precursors but also to follow and create the trends that would lead the market.
Today the House of ODIOT still stands at 7, Place de la Madeleine Paris, and their production remains exquisite!