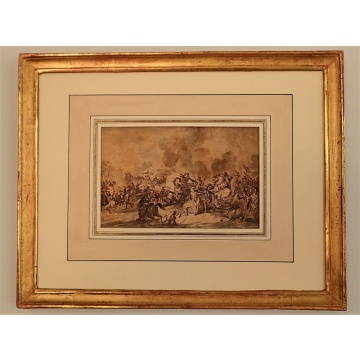 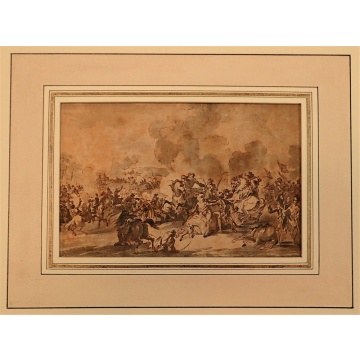 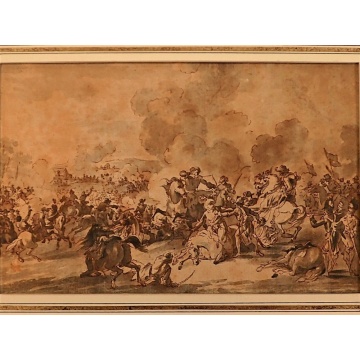 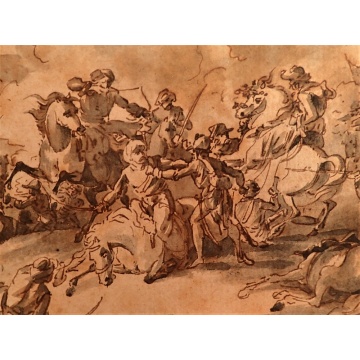 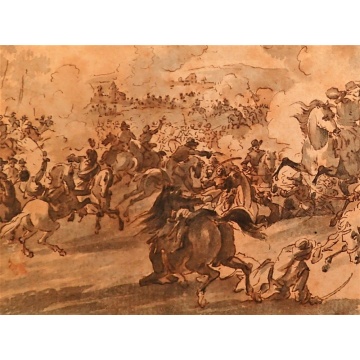 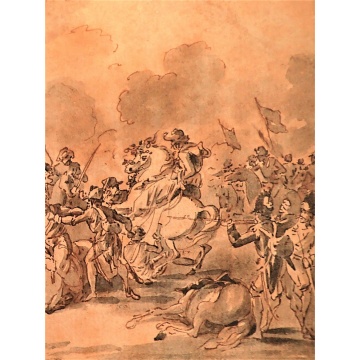 19th Century French Ink Drawing The Battle Of The Pyramids~Sold~

Gorgeous early 19th Century Ink and Brown Wash Drawing Of the Battle Of The Pyramids.

The Battle of the Pyramids was fought on 21 July 1798 between the French army in Egypt under Napoleon Bonaparte and local Mamluk forces. It was in this battle that Napoleon introduced one of his significant contributions to tactics, the massive divisional square. The victory of the French army paved the way to the conquest of Cairo and eventually of the whole of Egypt for Bonaparte. The present work combines a view of the Mameluk fighters astride their prized horses fighting against French Infantry.

The depiction of the horses is absolutely stunning, combining a perfect movement study with an incredible strength of strokes.

The background seems to show the Embabeh Area of Cairo, located to the west of Cairo, which was where the Battle took place.
Interestingly enough, the Pyramids could not be seen from Embabeh, yet later on, Napoleon took the decision to name the Battle, the Battle of the Pyramids, as it sounded better and easier to locate then Embabeh!

Our drawing was attributed to Paul Dominique Philippoteaux.
Paul Dominique Philippoteaux initially trained with his father, specialising in battle scenes and history paintings, and subsequently with Alexander Cabanel (1823-1889) and Léon Cogniet (1794-1880) at the School of Fine Arts in Paris.
He travelled extensively to the United States and in 1883 he executed a large-format painting depicting the Battle of Gettysburg, which occupied the Cyclorama in Boston. Philippoteaux was especially well-known for his Orientalist subjects, most of them in Cairo, where he settled in 1883.

This gorgeous Drawing was purchased in Lyon and was part of a Private Collection.