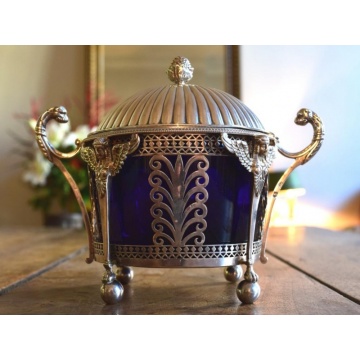 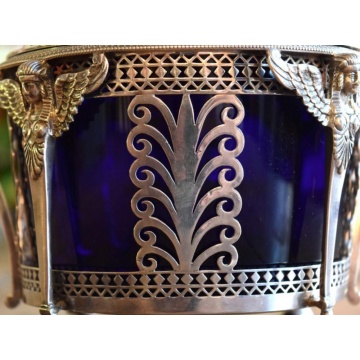 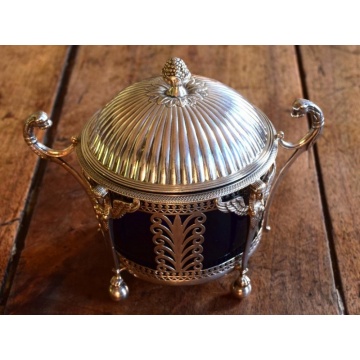 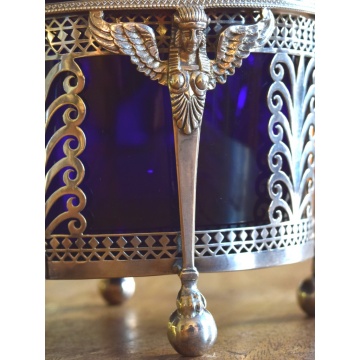 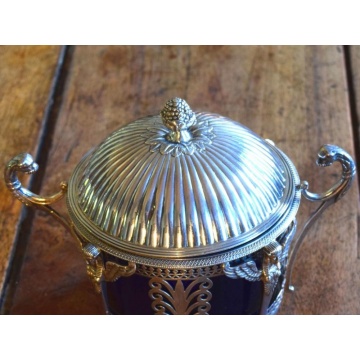 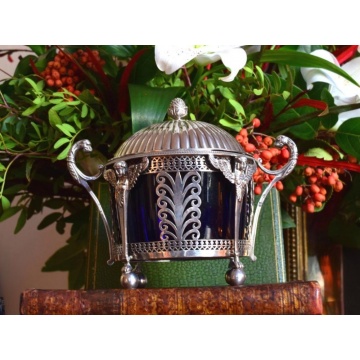 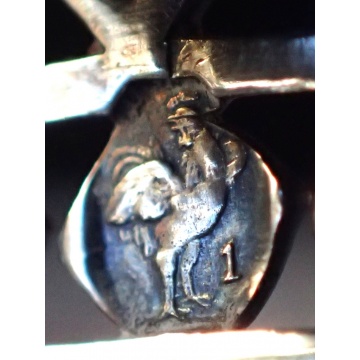 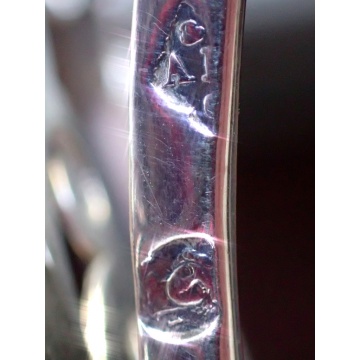 This lovely piece is decorated in the typical ‘Retour d’Egypte’ or Return from Egypt style that followed Napoleon’s military campaign in Egypt from 1798 to 1801 and the start of Egyptology.

The sides are inlaid with beautifully carved Sphinxes with outstretched wings wearing the Pharaoh’s ‘Nemes’ or ritual head cloth, on four sides. The four figures end in columns and a clawed paw resting on a silver pearls which doubles up as the sugar caskets feet.
The four sphinxes are separated by four palmetto reliefs.
The upper and lower register is beautifully lined with a geometric fringe

The twpo handles end in the shape of a dog’s head while the lid is ribbed and ends in a berry finial resting on a crown of leaves.

The insert is cobalt blue crystal and is in mint condition. The silver details are in very good condition.
A truly beautiful piece, elegant refined – perfectly Empire!

The Hallmark is ‘1er Coq’ -1st title (950/1000) – 1798 -1809- Paris
A wonderful detail for the collectors: The piece is marked with what is known as a ‘Head of Greek Women’ with the letter P on the left hand side…
This is a hallmark that was used during the Revolution between 1793 and 1794 in Paris, which would mean that Ambroise Mignerot would have designed the piece earlier and then re introduced it in 1809.

The Makers Mark is that of Ambroise MIGNEROT.
Ambroise MIGNEROT’s Makers Mark shows an A and an M with a ‘nacelle’ topping the letters and a dot underneath them. His mark was created in 1800 and cancelled (biffe) in 1818. His workshop was first located 2 rue Jean Robert, then 62 Rue du Temple. Ambroise MIGNEROT took under his wing a young Denis GARREAU that would later inherit his offices.