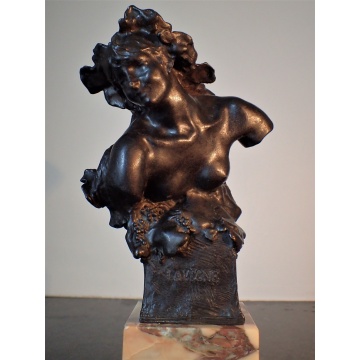 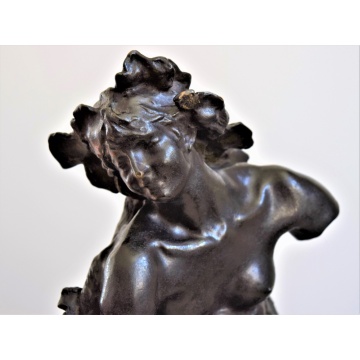 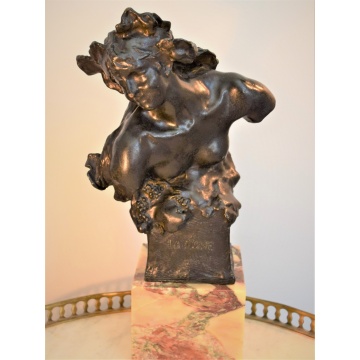 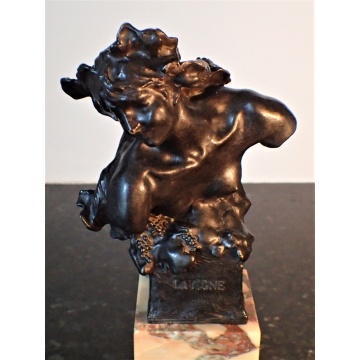 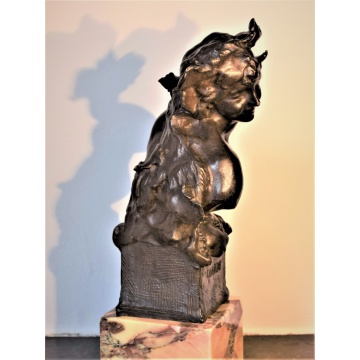 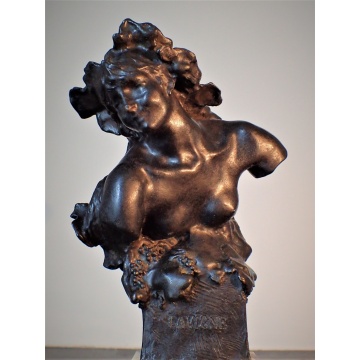 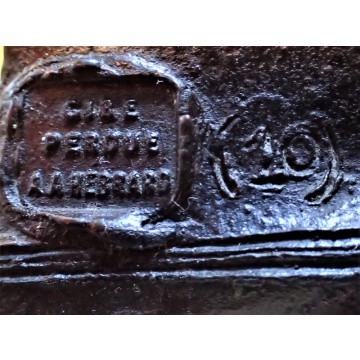 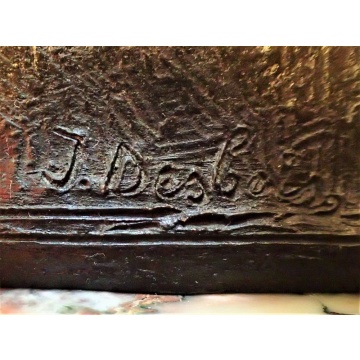 A Gorgeous Bronze Statue Of La Vigne, or ‘The Vine’ By Jules DESBOIS.

Jules Desbois (1851-1935), a friend and colleague of Rodin, was one of the greatest sculptors of his time. His decorative art pieces, sculptures and monumental groups celebrate the human body, combining the sensuality of the human body and the dire conditions of society
Jules DESBOIS Studied at the Ecole des Beaux Arts under Pierre Jules CAVELIER and made his Salon debut with a head of Orpheus in 1875. His exhibit of 1877 would subsequently be bought by the State.
Around the late 1870s he met Rodin, in the Studio of Eugene LEGRAIN, where both he and Rodin were assisting with the sculptures for the Palais du Trocadero.
After a brief spell in New York, Desbois returned to France and collaborated with Rodin on several major works, one of which was the Bourgeois de Calais.
Desbois soon made his mark in the social panorama by representing an almost miserabilist realism as found in his group Death and the Woodcutter which unfortunately was later destroyed, or in the statue Poverty.
By 1896 the Société Nationale des Beaux Arts dedicated a full show to his works.
Gradually he tried to find his own style of expressionism while adopting Rodin’s principal invention, a Fragment of a statue presented as a work in itself.
However contrary to Rodin, Desbois interpreted suffering and misery with humanism and compassion giving an unprecedented depth to his pieces.

Which brings us back to our beautiful Statue of La Vigne.
In this model created circa 1906, Desbois used a powerful technique to draw the maximum character to this human figure. It is found in the powerful twisting movement, the accented bone structure and the density of the sculpture, and the flowing mane….

From 1924 to 1929 towards the end of his life Desbois was the Vice President of the Societe Nationale des Beaux.
Today his pieces can be found in The Musee d’Orsay in Paris but also in the Metropolitan Museum in New York.

Our beautiful Statue of La Vigne also bears the Mark of AA HEBRARD founder.
It is numbered and stamped with the foundry mark, on its base, Cire Perdue A.A. Hébrard //10 (number 10)
A word on the importance of our model:
44 examples of this gorgeous statue were created by Hébrard, and only upon special request according to the Jules DESBOIS Museum, who possesses # 26!
We are thrilled to have this gorgeous piece in our collection.

The Hébrard Foundry was created by Art founder Adrien-Aurélien Hébrard (1865/1837)
The Company was first located at 73 avenue de Versailles in Paris. Then in 1904 Adrien-Aurélien Hébrard opened another gallery at 8 rue Royale, where he proceeded to present the major Artist pieces he edited.
The Hébrard Foundry specialized in the Limited Edition Lost Wax process. His limited editions were particularly known for the excellence and precision of their casting and the beauty of their patina.
His foundry closed its doors in 1937 after Hébrard’s death.
Hebrard worked with the biggest names in sculpting amongst which Carlo and Rembrandt Bugatti, Edgar Degas, Falguiere, Jean Baptiste Carpeaux and Jules Desbois.

Finally allow us a word of the Lost Wax process:
Also called cire-perdue, is a method of metal casting in which a molten metal is poured into a mold that has been created by means of a wax model. Once the mold is made, the wax model is melted and drained away. A hollow core can be obtained by the introduction of a heat-proof core that prevents the molten metal from totally filling the mold.
To cast a clay model in bronze a mold is made from the model, and the inside of this negative mold is brushed with melted wax to the desired thickness of the final bronze. After removal of the mold, the resultant wax shell is filled with a heat-resistant mixture. Wax tubes, which provide ducts for pouring bronze during casting and vents for the noxious gases produced in the process, are fitted to the outside of the wax shell, which may be modeled or adjusted by the artist. Metal pins are hammered through the shell into the core to secure it. Next, the prepared wax shell is completely covered in layers of heat-resistant plaster and the whole is inverted and placed in an oven.
During heating, the plaster dries and the wax runs out through the ducts created by the wax tubes. The plaster mold is then packed in sand, and molten bronze is poured through the ducts, filling the space left by the wax. When cool, the outer plaster and core are removed, and the bronze may receive finishing touches.
The Lost Wax process was usually done to prevent the model being reproduced endlessly and hence guaranteed the rarity of the pieces.

We hope you will enjoy looking at this charming statue….