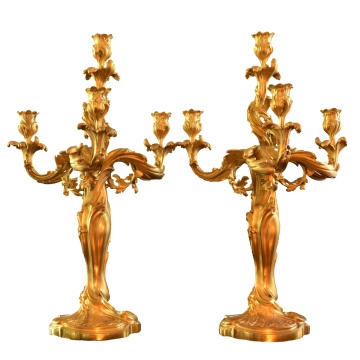 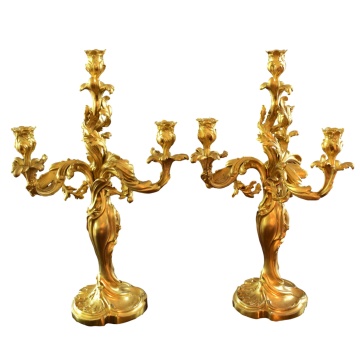 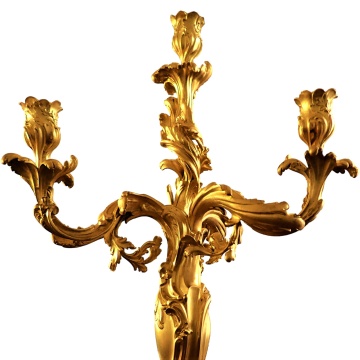 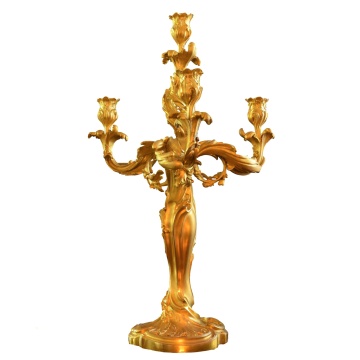 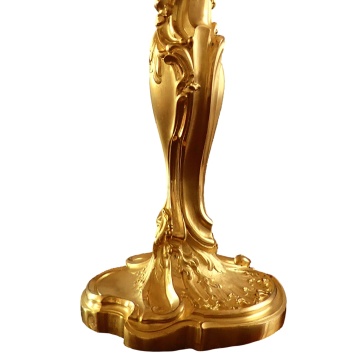 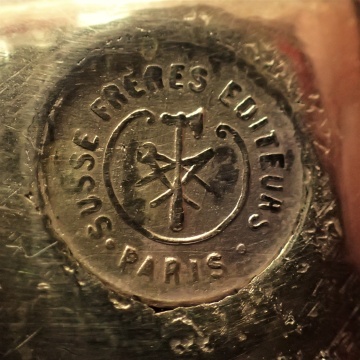 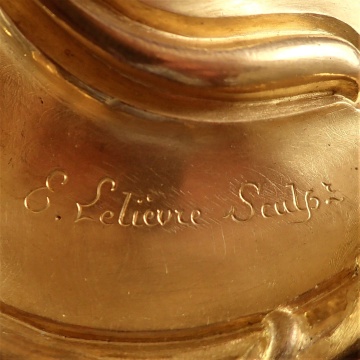 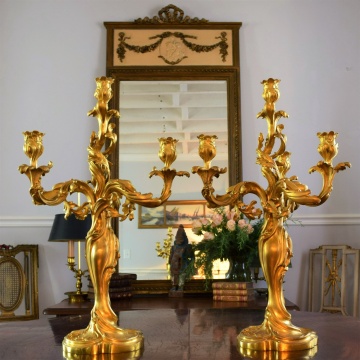 A magnificent Pair of Ormolu Candelabras in the Louis XV Style by Eugène Lelièvre and Susse Frères.

In chased and gilded bronze, with four arms of light with foliage, rocaille clasps and stylized shells, they rest on a circular base signed E. Lelièvre Sculp.r and stamp of the founder Susse Frères.
The Pair of candelabras featured in the Susse Frères Catalogue in 1890.

Both Eugène Lelièvre and Susse frères deserve a little more details.
Susses Frerès who still operates under Susse Fondeur to this day, is the oldest Art Foundry in France.
Created in 1758 by two brothers who had left their native Lorraine in 1740, it underwent several transformations going from creating refined furniture to editing books
By 1839 they had affirmed their status as a staple in the Art world. Brother’s Michel Victor and Amédée were poised to take the firm to another level.
Susse Frères began producing gorgeous sculptures and collaborating with France’s best Artists. They were particularly well known for the wonderful patinas they produced and the detailed casting.
In addition to Sculptures the Susses Frères made refined and delicate bronze parts for furniture and clocks.
They were also considered one of the best defenders of French Fine art production running regular publicity campaigns highlighting the ‘French excellency label’.
Interestingly they also manufactured one of the 2 first daguerreotype cameras ever sold.
The company remained under the family’s helm until 1975. Today it still operates near Paris and works with several artists.
Susses Frères collaborated with Eugène Lelièvre on several occasions, casting Candelabras, clocks, boxes and various bronze and ormolu pieces for him.

Eugène Alfred Lelièvre was a French artist and silversmith, who had a workshop at 14 bis rue des Minimes in Paris.
Originally created by his father Francois who was a watchmaker in 1874, the workshop was taken over by Eugene in 1896 and became well known for his beautiful sculptures, jewelry, accessories and tableware.

Eugène was a valued member of the legendary Paris Salon and perhaps his skills are best expressed by a ‘communiqué’ published in 1906 in ‘Le Panthéon de l’Industrie’:
‘Through his different works, Mr. Eugène Lelièvre proves himself to be one of our best decorators and no one knows better than him how to express an idea, always noble and great, with the only means of his art.
Moreover, Mr. Eugène Lelièvre has been awarded a medal at the Salon; he is also a member of the Committee of the Society of Decorative Artists, organizer of the artists’ lodge that could be admired at the Petit Palais in 1904, and he won a gold medal at the Exposition of 1900 In Saint-Louis, we must still mention that he is an officer of the Academy and that he obtained a prize of the minister at the Exhibition of Horticulture of France.
Mr. Eugène Lelièvre is thus at the forefront of those who understand the need for an energetic effort to resist the assaults of foreign art industries and who will have endowed our country with a new and distinctive style’

This gorgeous pair of candelabras are in excellent shape.