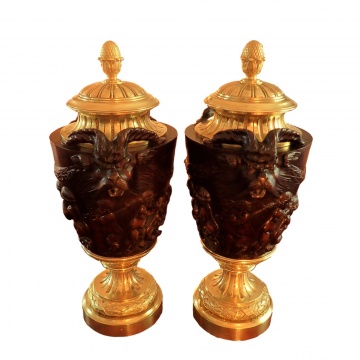 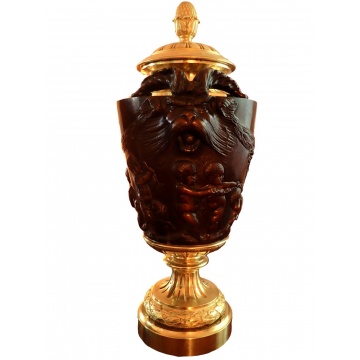 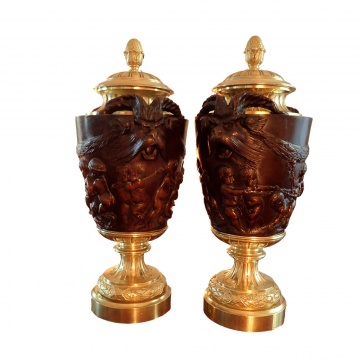 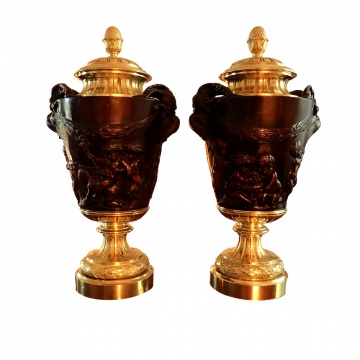 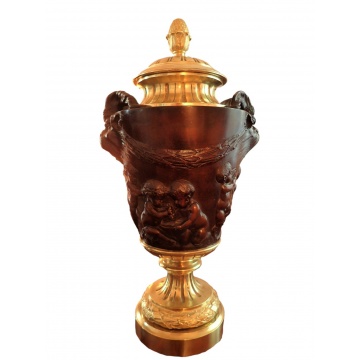 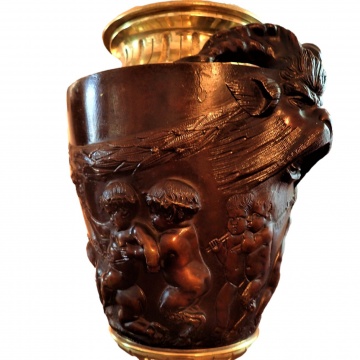 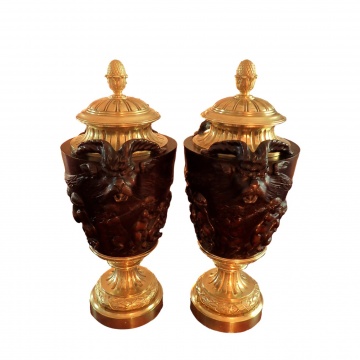 Gorgeous Pair of Patinated Bronze Covered Vases By Clodion
This impressive pair of covered pots or vases show both Bronze and Patinated Bronze in a lovely shade of crimson brown.
A Chimera or Mythical and Imaginary beast, with Ram horns flanks both sides.

The Main body of the pots are decorated with an Allegory of a Bacchanalia with a Young Bacchus and his followers
In it we see Bacchus as a putto carrying his staff decorated with grapes and ribbons being paraded by putti and fauns while other putti are in the process of collecting grapes.
Baby Bacchus and another putto are carved in partial ronde-bosse, which give a lovely depth to the décor.

These two pieces are signed CM or Claude Michel for Clodion.
Claude Michel or Clodion, deserves a little more background.
He was born in Nancy on Dec. 20, 1738, into a family of sculptors. He studied with his uncle, Lambert Sigisbert Adam, a prominent sculptor whose work was significant in transforming the vigorous and dynamic baroque style into the more delicate rococo. Clodion also worked with the famous rococo sculptor Jean Baptiste Pigalle. In 1759 the Royal Academy awarded Clodion the Grand Prize for Sculpture, and he was in Rome between 1762 and 1771. During the 1770s he completed two important commissions for the Cathedral of Rouen: the marble St. Cecilia and the bronze Crucified Christ.
In 1773 he became a member of the academy. He created his most important works during the 1770s and 1780s.
Clodion, whose career spanned the last decades of the Ancien Régime through the French Revolution and Napoleon’s reign, embraced his era’s taste for antiquity.
He possessed great technical virtuosity and executed many types of sculpture in a variety of media.
Clodion is most noted for small, intimate terra-cotta sculptures or statuettes of nymphs, fauns, satyrs, and bacchantes, mythological creatures symbolic of erotic pleasure.
Such works as the Intoxication of Wine (Nymph and Satyr) and Seated Bacchante Playing with a Child are typical examples and are wholly within the decorative rococo traditions of 18th-century art. These graceful productions convey a mood of exuberant gaiety and depend for their effect upon a delicate play of highly refined textures; the soft medium of terra-cotta allowed Clodion to exploit fully and sensually the contrasting textural values of flesh, hair, fabric, fur, and foliage.
As early as the 1760s, the rococo style was under attack as frivolous and trivial, and during the last half of the century it was gradually replaced by a return to the relative severity of the art of antiquity. Clodion, however, was unaffected by the encroaching neoclassicism, and his statuettes remained popular until the French Revolution. During the Revolutionary and Napoleonic periods neoclassicism triumphed in the arts, and in his later works, such as the reliefs (1806) for the Arc du Carrousel in Paris, Clodion finally accepted the new style. He died in Paris on March 28, 1814.

Both Covered pots come with their removable interiors.
The original model, created in Terra Cotta by Clodion in 1773, is in the Hermitage Museum in St Petersburg.
The Terra Cotta original was presented during the ‘Clodion’ Exhibition which took place at the Louvre in 1992.