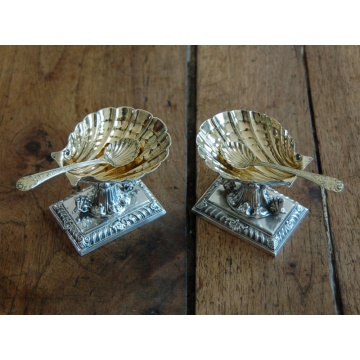 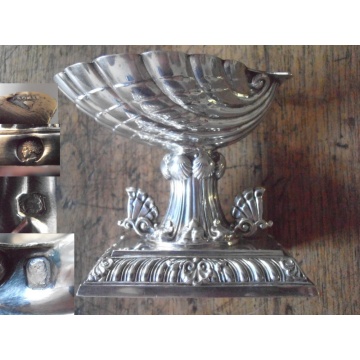 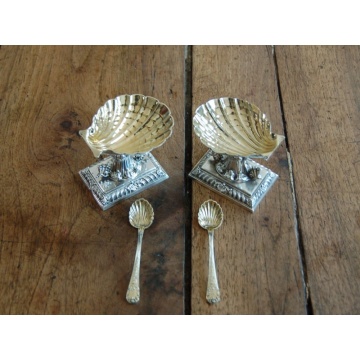 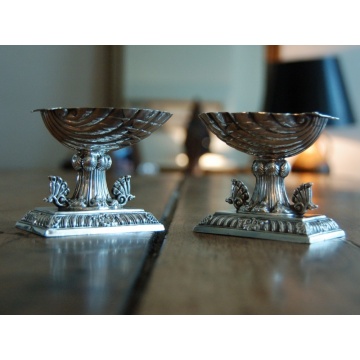 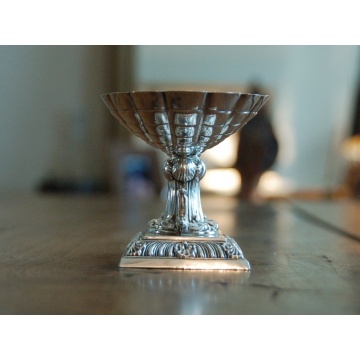 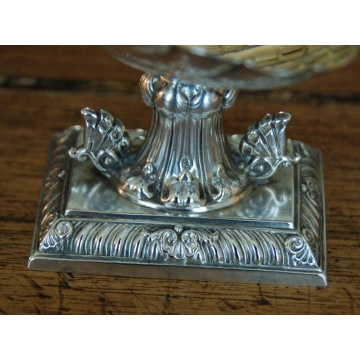 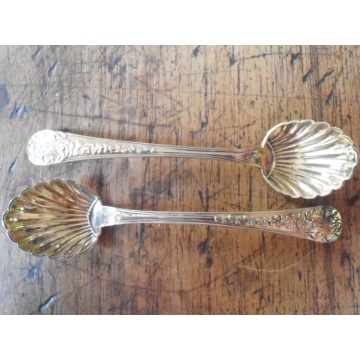 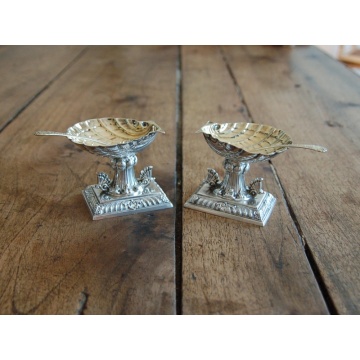 When we bought this piece we had a fair idea it was stunning in itself! However the best part was yet to come!
Once cleaned we deciphered the Makers Mark, and made it out to be for François Désiré Froment! For those who are a little more versed in the Antique world, it turns out to be one of the greatest Maitre Orfèvre France ever produced! Please see below for a little lovely history!

This absolutely lovely pair shows a curved silver seashell, or rather a Scallop shell standing on a silver scroll pedestal also decorated in tiny seashell. The pedestal rests on a rectangular base decorated in silver scrolls and foliage with another tiny seashell adorning its center.
The salt cellar/seashell inside is coated in 18 ct gold in order to better withstand the salt’s corroding effect.
The two cellars come with their original spoon. The spoons ladle is seashell shaped and its handle is decorated in floral scrolls.

We feature several Hallmarks on these two pieces:
A Poinçon au Vieillard or Michel Ange Hallmark -1st title – Paris -1819 to 1838
A Poinçon Minerve -1st title – Paris 1838 to 1919
Of course we also have the guarantee which is the one used for higher or more expensive pieces.

Then we have of the salt cellar the Markers Mark showing an F with underneath it FROMENT spelled out and a Sheaf of wheat at the bottom.

So here is the rest of the story:
François Désiré Froment was born to a modest silversmith called François Froment, who died in 1803 shortly after Francois Desire’s birth. His mother went on to remarry Pierre Jacques Meurice who opened shop in 1811 at the Arcade St Jean close to the Hotel De Ville in Paris. After finishing school François Désiré studied silver minting under Lenglet, from whom we feature items on our website, before settling with his stepfather. In 1828 his stepfather turned over the business to him. In 1839 he changed his name to Froment-Meurice and changed his mark to reflect this update in 1840!
The piece we are showcasing was probably minted right before he changed his name and Mark, this is highlighted by the fact that we show both a Vieillard Hallmark which ends in the early part of 1838 and a Minerva 1 Hallmark which begins in 1838.
Since François Désiré Froment’s Mark still does not show the later tag of Froment-Meurice which he took in 1840, this would place this lovely set square on the year 1838!
After changing his name Froment Meurice took part in the International Fair of 1839 and received two silver medals for his work. He went on to become Louis Philippe’s main Master Silversmith and worked for the City of Paris as its official silversmith. In 1844 and 1849 he would win gold medals for his achievements. He died in 1855, shortly before the next Universal Exposition, at the height of his fame.