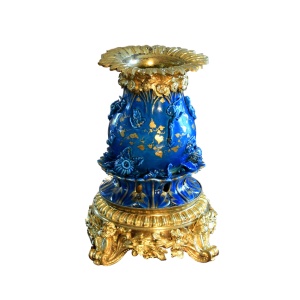 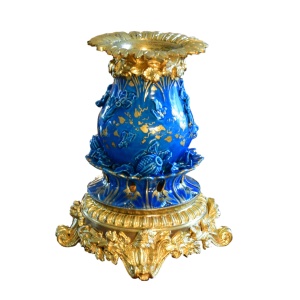 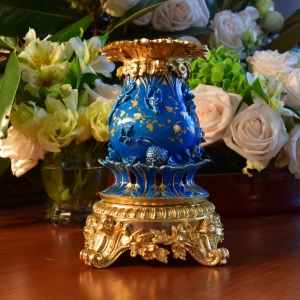 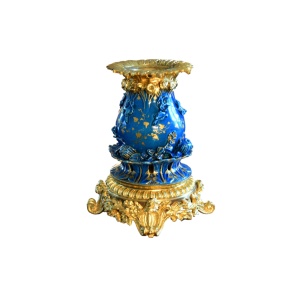 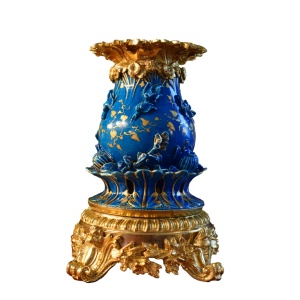 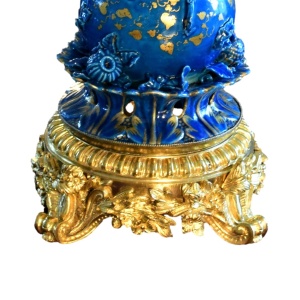 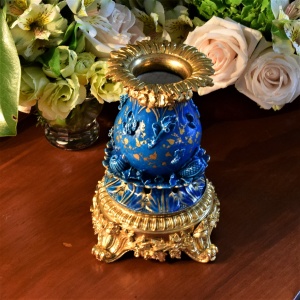 An interesting Vase or Pot Pourri in Soft Paste Porcelain, attributed to the Manufacture Saint Cloud.

The vase is enameled white soft-paste porcelain over decorated with celestial blue in the ‘Chinoiseries’ style loved towards the 1750/1760s.
The floral décor is treated in high relief with light golden strokes which were probably added a a later date.
The Pot Pourri was fitted with an ormolu base and neck, it is beautifully chiseled with leaves and flowers, and the neck imitates the effect of a pineapple.

The Manufacture de Saint Cloud, created in by Pierre Chicaneau in the last quarter of the 17th century, was the domain of Monsieur, Philippe d’Orléans, brother of Louis XIV.
A huge collector he loved porcelain and had a large collection of Chinese porcelain. He was one of the benefactors of the porcelain factories in the quest of hard porcelain.
The 1st attempts of Polychromy take place at the end of the 17th century. They will mirror Chinese and Japanese decorations of Kakiémon style.
But It is under the direction of Henri II Trou that the polychromy becomes more extensive with the 5 typical colors of the Chinese porcelain and cooked with the small fire: cobalt blue, copper green, Antimony yellow, Iron red and finally manganese purple.
The Chinoiserie style décor would be a favorite of Saint Cloud until the end of the 1760s.
When the kilns were shut down in 1766, Sèvres, a few leagues away, had already taken over a decade earlier.

The Ormolu fittings were probably added later around the 1780s.