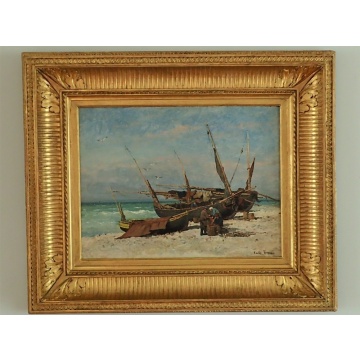 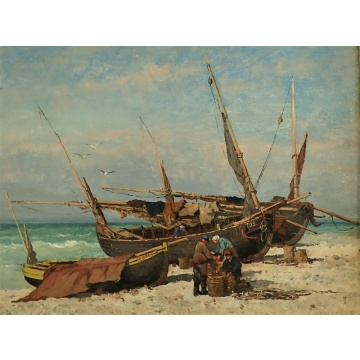 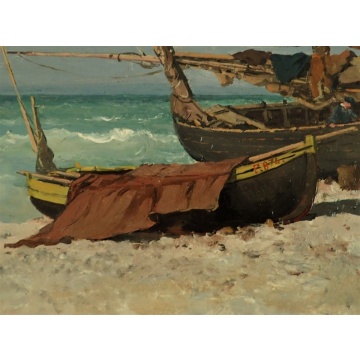 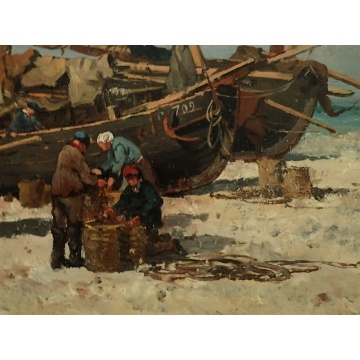 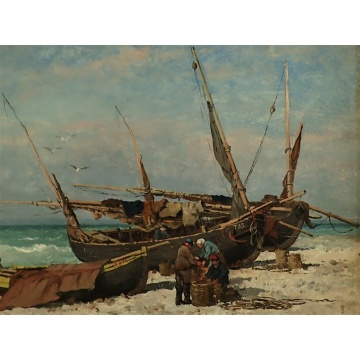 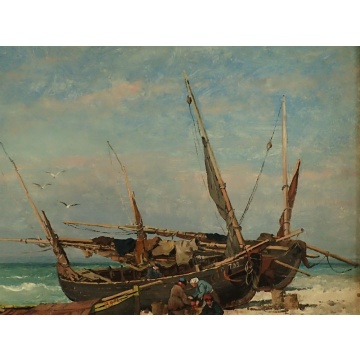 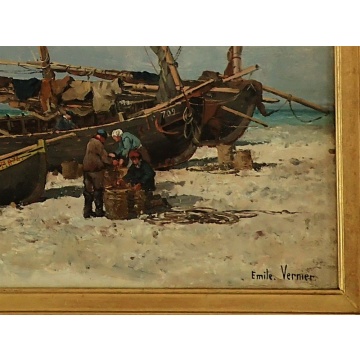 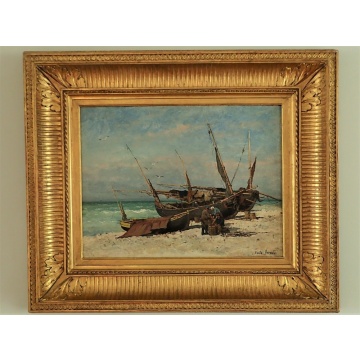 Oil Painting Of The Return Of The Fishermen By Vernier

A Gorgeous Oil Painting of The Return of the Fishermen In Yport, by Emile louis Vernier.

Vernier liked to introduce the man in his compositions or to recall his presence by the tools of his profession, boats, nets, etc…
Nearly every one of his Marine paintings represents an episode in the lives of fishermen.
This peaceful scene of ‘back from fishing’, treated with soft but precise strokes, contrasts with the power given to the elements.
The brushstrokes are visible, and applied side by side in a first draft, they accentuate the movement and the effect of depth.
One notices in the sky the brushstrokes placed in all directions, in order to project as well as possible the windy and nebulous effect.
The alternation of blue and green tones, as well as the thick impasto, gives the sea all its power, and is reinforced by touches of white on the crest of the waves.
In the foreground, the brushstrokes are shorter, the alternating choice of colors creating even more depth.
This scene of day to day life exudes a great serenity, while emphasizing the power of the elements.

Emile Louis Vernier was born in 1831 in Lons-le-Saunier and died in 1887 in Paris. Medalist on numerous occasions at fairs and exhibitions, he was made a Knight of the Legion of Honor in 1881.
In Vernier there were two talented artists, a painter and a lithographer.
As a lithographer he was placed among the masters of the discipline, reproducing with equal success, paintings by Courbet, Puvis De Chavannes, Díaz de la Peña, Corot, Delacroix, Daubigny, Meissonier…
A declared ‘Plein air’ painter, it was not until 1865 that he presented his first painting at the salon with a landscape view of the Jura.
In 1869, the painter discovered the sea for the first time during a stay in Yport, near Fécamp.
It was the sea that revealed to him the true secret of attractive color and put him in full possession of himself. From the day he chose the sea as the subject of his paintings, he had nothing but success.
What was most admired about him was the sincerity, the tasty frankness of tone and the artistic feeling with which he chose his painting subjects.
Whether he was facing a foggy sea or a setting sun, whether it was a matter of keeping within the chromatic range of the greys or of making the tonalities the most brilliant, he immediately found on his palette, and without hesitation, the tone his brush required.

He lived only for his art, and as soon as the annual exhibition on the Champs-Elysées would close, he would leave for the “coast” and only return when the cold forced him to leave the beaches.
A tireless worker, he drew the elements of his success and uninterrupted fertility from his passion for art.

The scene depicted here by Vernier is taken near Fécamp, which is known due to the identification seen on the boat starting with an F.
We are precisely in Yport, and the boats depicted are ‘caïques’.
Yport was a seaman’s town, from which many departed the country to wander the globe.
The word “caïque”, came from the Greek “Kaiki” or the Turkish “Kayik”, and depicted an ancestral family of small rustic boats with oars or sails, a light boat extensively used in the Middle East.
The use of the term “caïque” would have spread along the Channel coast at the beginning of the 19th century following the construction of the Napoleonic fleet in Boulogne to invade England…
After the lifting of the Boulogne camp in August 1805, many of these light gunboats were sold as fishing boats at the price of one hundred francs each!
The “caïques” then became the emblematic fishing boats in Yport, practical to use and lightweight!