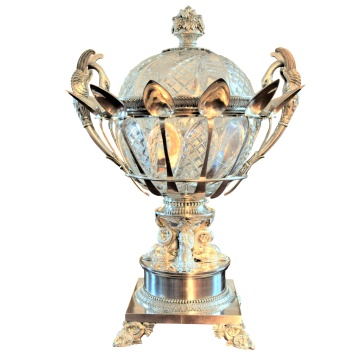 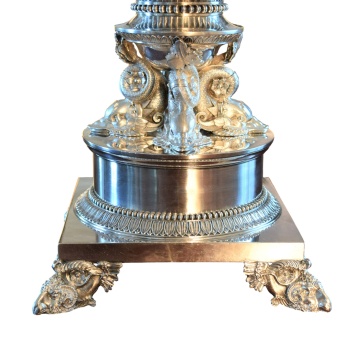 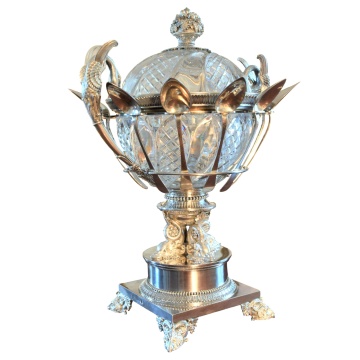 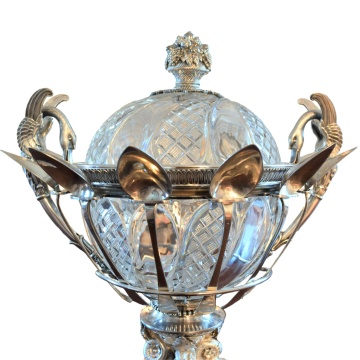 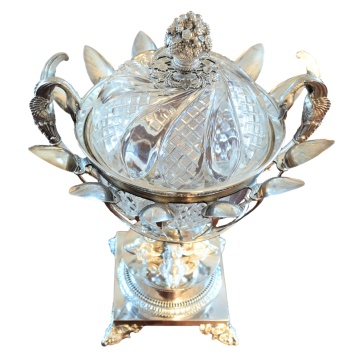 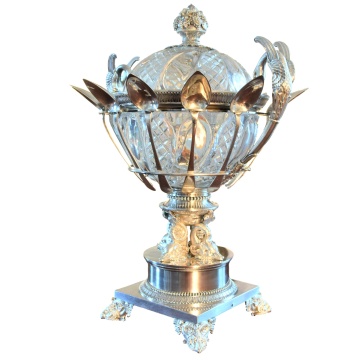 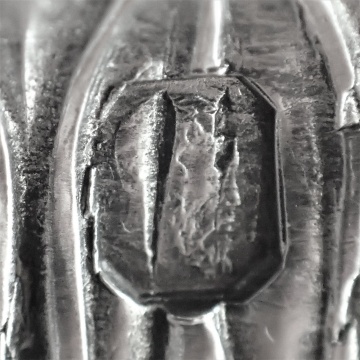 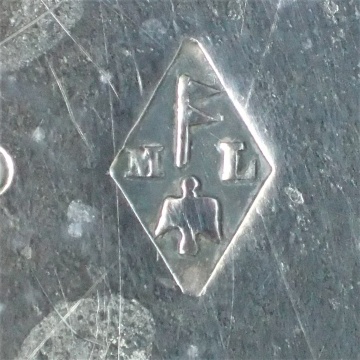 As already noted in other descriptions it appears however that originally these pieces were mostly used a ceremonial sugar bowl, though the term ‘Confiturier’ literally means Jam Vase.
This gorgeous piece is really Museum worthy….The work on this beauty is just Pure Perfection!
The fact that the crystal is also intact adds to the rarity.

Let us start by the upper part:
The cut crystal lid is dome shaped with a gorgeous Finial in heavy silver shaped as a fruit basket laying on a wreath of strawberry leaves and wheat sprigs.
The upper register is a double circle of solid silver decorated by a laurel leave wreath. The lower register of this part has twelve solid silver spoon holders stretching out along the crystal vase.
The handles consist in two Majestic Swans with outstretched wings rising out of an acanthus cornucopia. Here again the details on the swans are staggeringly beautiful! The heads, eyes and beaks are just amazing!
The lower part of the cornucopias meet large Palmetto that rise on the side of the Crystal vase and which in turn are attached to the start of the pedestal with a beautifully worked column with fine gadroons.
A second circle of silver is attached to the two palmettos; it enables the spoons to stay in place…
The Pedestal is just….Wondrous…
It consists of 4 Dolphins sculpted in the typical ‘Ronde-Bosse’ (sculpted in round) Style. The Tails fan out by the start of the pedestal around the gadroon lined part and the rest of the bodies are beautifully worked. The details of the heads by itself are incredible…
They rest on a round plinth circled by laurel leaves, the plinth itself set on a square base resting on another very rare detail…
The four feet are done with incredible precision in the shape of rams’ heads extending into chimera’s.
The bowl insert is white wheel cut crystal, it is original and in impeccable state!
This is just a wonderful work of art!
It can also be put to use as a Beautiful Caviar Serving Bowl!! A gorgeous way to use it as a matter of fact!
The Particularity of these pieces, is that the Maitre Orfèvre who did the main object, did not create the spoons…
The spoons were always ordered from a Maitre Orfèvre who specialized in them, in this case Jean Baptiste Andrieu who registered his Mark in 1820.
The twelve spoons share the same ‘Poinçon Au Vieillard’ Hallmark, and are also solid silver.
The Width given above is taken at the Handles.

The Makers Mark is for Maître Orfèvre Marc Auguste Lebrun.
It shows his initials (ML) topped by a weathervane, with an eagle underneath.
This is his second Mark which he registered in 1810. His first Mark was registered on April 22nd 1808.
His workshop was located 40 Quai des Orfèvres in Paris. Marc Auguste Lebrun apprenticed under Jean Baptiste Claude Odiot and went on to be one of the First Empire’s main Master silversmith, continuing into the Restauration period and until the late 1840s. Winning several prize including one for a gorgeous Silver Samovar during the 1844 Industrial Exhibition in Paris.
He also worked for the different European royal houses as well as the Russian Imperial house and Nobility.