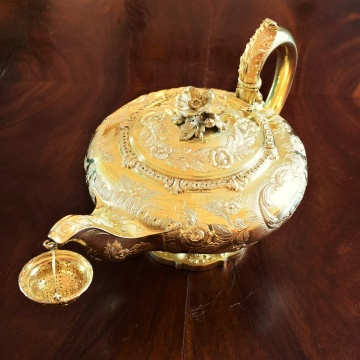 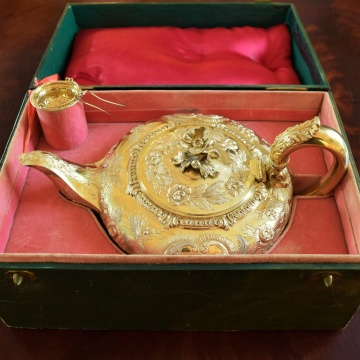 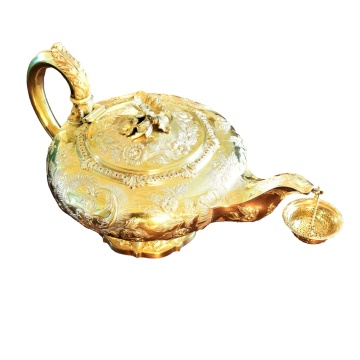 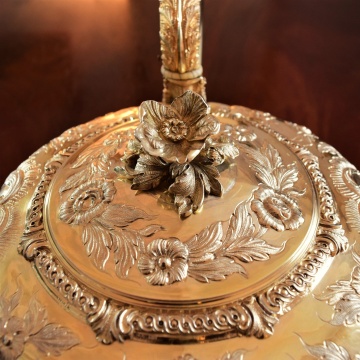 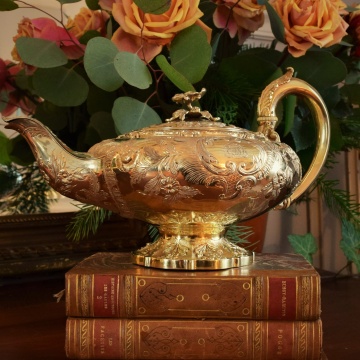 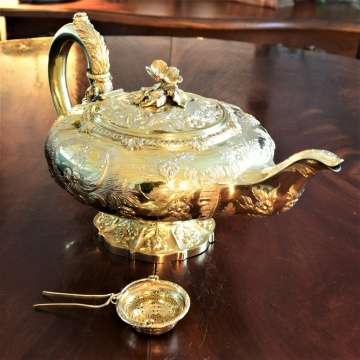 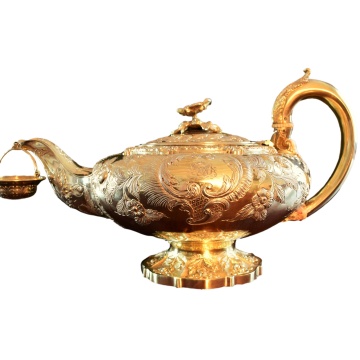 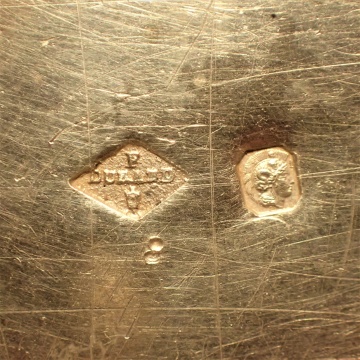 Decorated in delicate repoussé with flowers and foliage, as well as frieze of ovals, it rests on a pedestal with raised sides. The pedestal itself is carved with flowers on a beautiful guilloche background.
The handle features a gorgeous acanthus décor, while the finial bears a gorgeous periwinkle resting on acanthus leaves.
The tea pot comes with its matching tea strainer and is presented in its lovely original fitted presentation box.

The work is absolutely beautiful and worthy of the owner of the Teapot! The gilding on the solid silver is in a beautiful state.

The beautiful piece belonged to the Marquis de la Motte Baracé, Pierre Vincent Gatien de la Motte Baracé de Sennones (1779-1851). His Alliance Coat of Arms is engraved on both sides of the teapot.
They are underlined by his family’s Motto: ‘Lenitati Fortitudo Comes’ – which translates to ‘Strengh, Companion to Sweetness’
The first time the name is mentioned is in 1235 and it is then written de la Mote. Originally from Anjou, part of the family would settle in Touraine in the 18th century.
An important part of the French Chevalerie, the family was a member of the Ordre du Roi and The Marquis whose parents were guillotined 1794 during the Terror, was an officer in the Royal and Catholic Army of the West. The Army rose in 1793 to try and re establish Royalty. He survived the Terror and the end of the French Revolution and died in 1851.
His brother Alexandre de la Motte Baracé, Viscount of Sennones, was a writer, a painter and became the Secretary General of the Royal Museums in 1816.
The last of the family is extinguished in 1920.

The Markers Mark is a beautiful one as well.
It is that of François Durand and shows his last name written out topped by the letter F.
His Mark was registered on September 18th 1828.
His workshop was located 4 rue du Mouton in Paris.
François Durand, was Master Silversmith to the Duke of Orleans, but started as the pupil of ODIOT before becoming the head of the workshop of FAUCONNIER. He took part in numerous exhibitions of industrial products at the beginning of the 19th century, as well as in the Universal Exhibitions in London (Crystal Palace 1851) and Paris (1855).