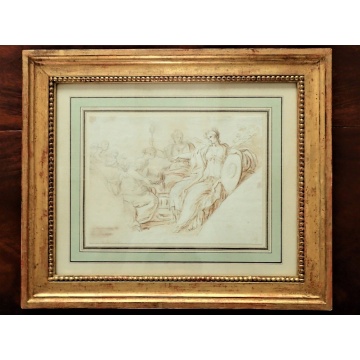 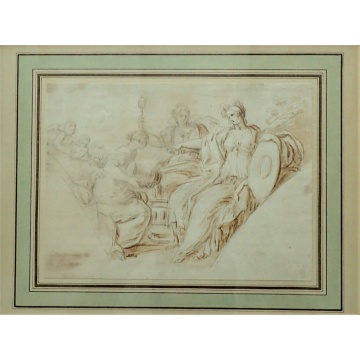 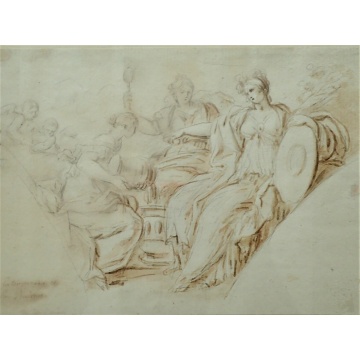 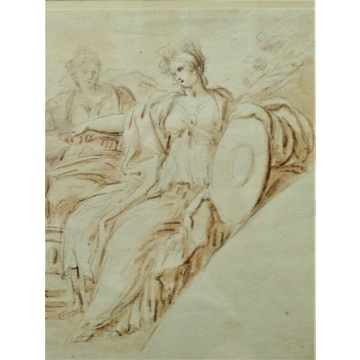 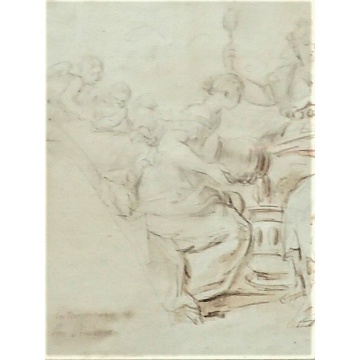 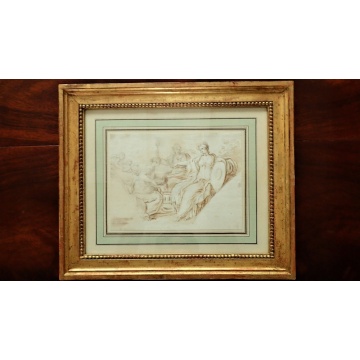 Drawn as a preparatory work to a probable painting this charming Lead Pencil Drawing shows an scene that could very well be inspired by the well known manuscript left by the so called Abbe de Saint Non after his travels to Italy.
The original model probably taken from Solimena’s work.

Jean Claude Richard de Saint Non, came to be known as the Abbe de Saint Non. Saint Non never having taken the orders (except for the minor ones to please his family) the name was never justified.
A painter he traveled to Italy in 1759 and met and befriended Hubert Robert and Jean Honore Fragonard both of whom were studying at the Academy.
He later recalled his travels in a document called ‘Voyage Pittoresque ou Description des Royaumes de Naples et de Sicile’, which he edited between 1781 and 1785.

One of the illustrations comes very close to our drawing.
In it Wisdom seated on the right is pointing at Temperance, who is sitting to left and pouring the content of a jar into a large vase; beyond, you can find the seated figure of Prudence.
the work is done in lead pencil with brown wash.

They illustrated perfectly 3 of the 7 cardinal virtues dear to the church.
This charming drawing is shown in a beautiful gilt wood dating to the early part of the 1800s.
The drawing measures 8 inches large by 6 inches high.
The Frame measures 14 inches long by 12 inches high.

The drawing was appraised by the Cabinet de Bayser in paris under number 358/43.
It was acquired in September 2019 in Paris.