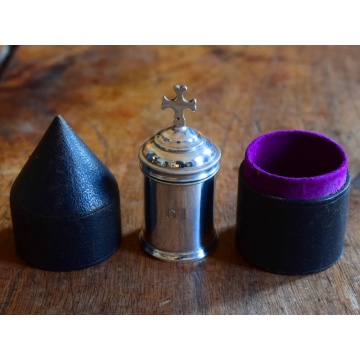 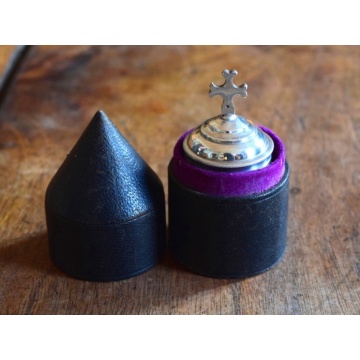 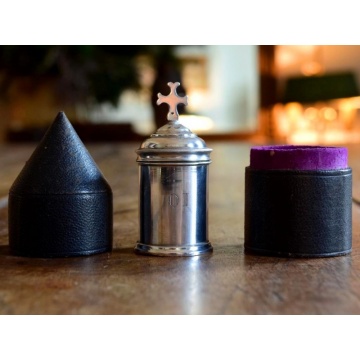 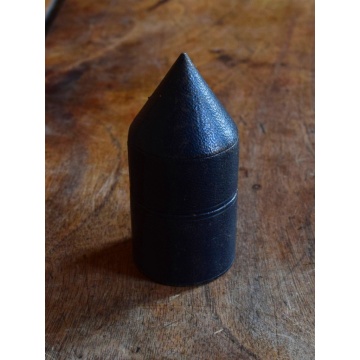 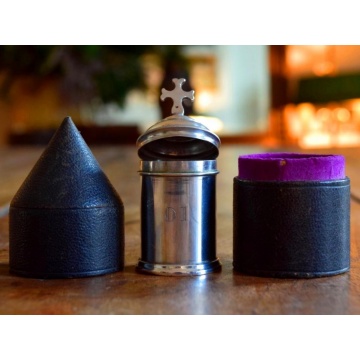 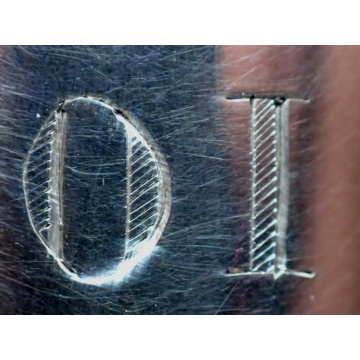 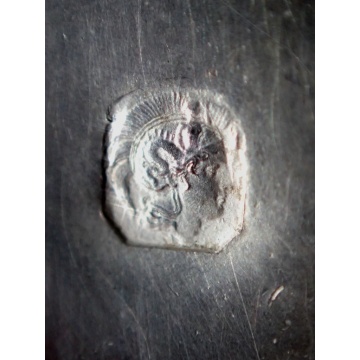 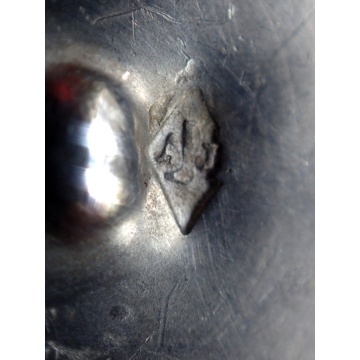 Presented in its original leather transport case lined with purple felt, this Solid Silver small container opens up to reveal the tiny cotton rounds containing the Sacred Oil.
The lid is hinged and topped by a silver cross.
The front of the silver container displays the letters OI for ‘Oleum Infirmorum’ or Sacrement of the Sick.

This sacred oil, called in Latin “Oleum Infirmorum,” is the “matter” or necessary substance for the Sacrament of the Sick, formerly known as Extreme Unction…
In the Churches which follow the Latin rite this oil is always pure, without admixture; but in some Eastern Churches it contains a little wine or ashes.

As regards the use of this oil in The Sacrament of the Sick, we know that it was employed in Apostolic times practically in the same manner as now. St. James, in his Epistle, thus instructs the faithful of the early Church: “Is any man sick among you? Let him bring in the priests of the Church; and let them pray over him, anointing him with oil in the name of the Lord. And the prayer of faith shall save the sick man, and the Lord shall raise him up. And if he be in sins, they shall be forgiven him.”

The sacrament of Anointing of the Sick is given to those who are seriously ill by anointing them on the forehead and hands with duly blessed OIL – pressed from olives or from other plants – saying, only once: ‘Through this Holy anointing may the Lord in his love and mercy help you with the grace of the Holy Spirit. May the Lord who frees you from sin save you and raise you up.'”

The Blessed Oils can be of three Kinds:
The Oil of Catechumens, the Chrism and the Oil of the Sick. Each of them is oil extracted from olives, but the Chrism is distinguished from the others by having balm or balsam mixed with it.
Each of these is blessed by the Bishop with a special form of prayer, expressing the purpose for which it is to be used and its mystical signification as well.

The Makers Mark is for Antoine JOLIVET and show his two initials separated by a a leg.
His Mark was register on April 23rd 1857 and he only specialized in Sacred Silver Art pieces.

His workshop was located 42 Quai des Orfèvres in Paris.