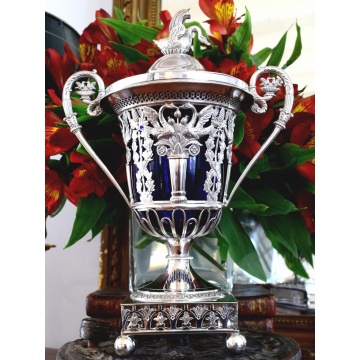 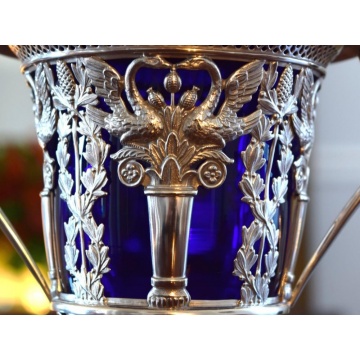 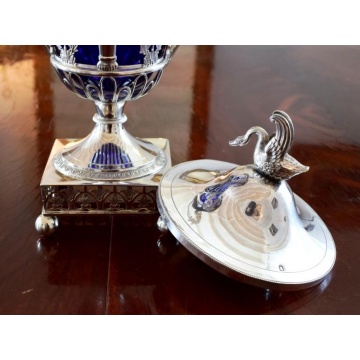 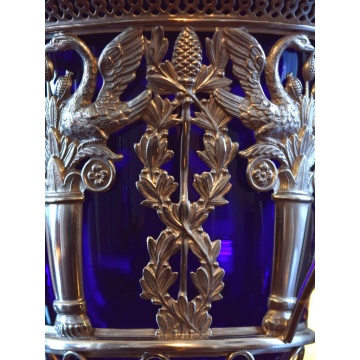 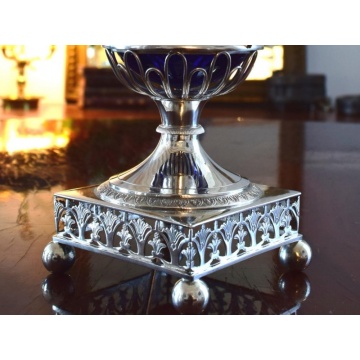 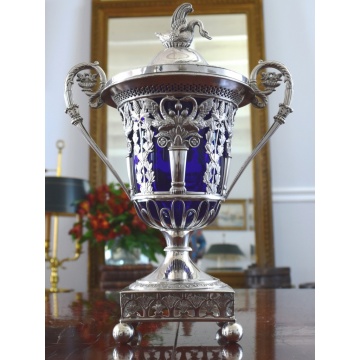 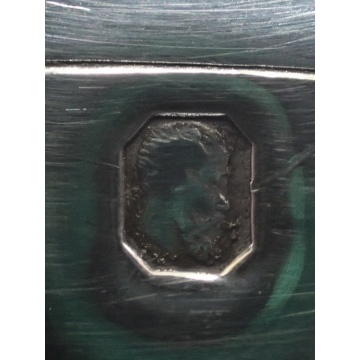 In France we call them ‘Drageoir’ or ‘Confiturier’, but the only official name is a ‘Confiturier’ (Hence a Jam container), and we can confirm that originally they were only thought of, and used, as Ceremonial Sugar Bowls.
The body of this gorgeous Drageoir is baluster shaped (or Medicis Vase Shaped) with four Figural ‘Tableaux’ representing Two Swans feasting on half opened Pomegranates.
The Swans have outstretched wings and rest on a pedestal decorated with finely carved palm fronds and two rosettes.
The details of the wings are absolutely exquisite!
Each register is separated from the next by a two laurel leaves stalks twirling around a stick topped by a pine cone.
The upper register of the ‘Drageoir’ is beautifully lined with a geometric fringe while the upper border shows a rosettes garland

The lower fringe of the piece shows geometric designs widely used at first by Mignerot and picked up by Garreau after him during the Empire Era.
The pedestal is square, resting on four round pearls of silver and decorated with stylized palmettos and papyruses.
The round central part of the pedestal is decorated by a spokes of hearts wreath.
The ‘Frétel’ (or finial) shows a gorgeous Swan with raised wings.
The bowl insert is blue crystal. It is original, and in perfect shape, no dents or marks.
The piece is absolutely lovely!

The handles show the symbol of love with couples of doves kissing on a nest.
A wonderful detail for the collectors: The piece is marked with what is known as a ‘Head of Greek Women’ with the letter P on the left hand side…
This is a hallmark that was used during the Revolution between 1793 and 1794 in Paris, which would mean that Ambroise Mignerot would have designed the piece earlier and it may have been picked up at a later date by Denis Garreau.

The Makers Mark is that of Denis GARREAU. It shows a D and a G topped by a ‘Navette’ (or boat)
Garreau was the successor of Ambroise MIGNEROT and specialized in larger decorational pieces (called in French Pieces De Forme), particularly “Drageoirs” and Condiment sets.
His mark was created in 1817. His offices were located at 62 Rue du Temple in what is today the Marais area of Paris.
He would turn over his practice to A Courtois.