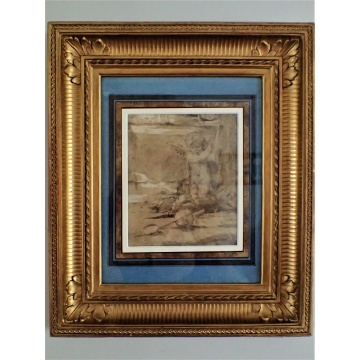 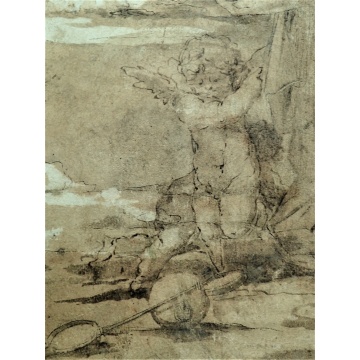 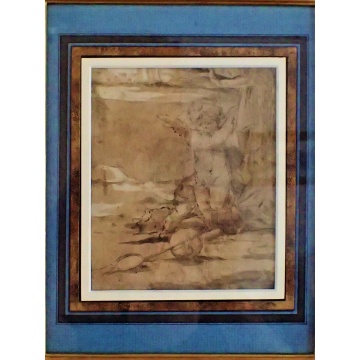 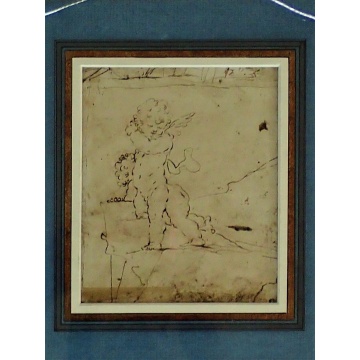 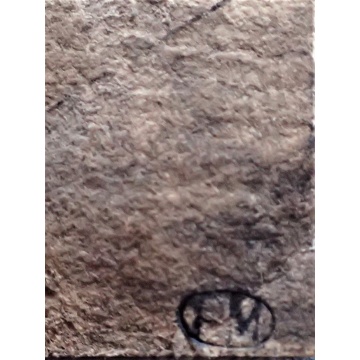 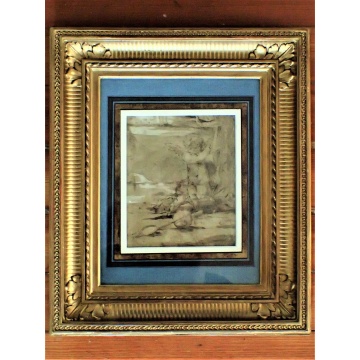 Pietro Candido was known in Holland as Pieter De Witte and in Bavaria as Peter Candid, but took in Italy the variation of Pietro Candido.
Flemish he was born in Bruges in 1548 and moved to Florence at the age of 10 with his parents.
Peter started his apprenticeship in Italy in the early 1560s, with his first work recorded as a fresco in 1569 in Florence. By 1576 his is mentioned as a member of the Academia delle Arti Del Disegno.
The prestigious Academy in Florence counted in its members Michel Angelo Buonarotti, Benvenuto Cellini and Agnolo Bronzino among others.
By 1586 he had been to the Ducal court of Munich and became the first Court Painter to the Duke of Bavaria. He passed away in Munich in 1628.
This two-sided drawing is typical of the preparatory works left behind by Candido.
The drawing shows the dotted ink strokes that were usually found in his pieces.
The front side shows a winged Cherub, pushing aside a curtain to playing with a ball.
Another putto is slightly visible behind him.
The Reverse drawing shows two Putti playing while on a hill.

Both drawing bear the Collector’s Mark of Paul Mathias Polakovitz, registered under Lugt 2010 and featuring his initials PM in a blue oval form.
This wonderful collector was a journalist, born in Budapest in 1921 who passed away in Paris in 1987.
Mathias, as he was widely known, studied in Switzerland and in England where he met and befriended the Shah of Iran. By 1949 he had moved to Paris where he embraced journalism. Hired by Paris Match, his talent for storytelling and his good looks made his ascension an easy one. In 1960 he was appointed as the Bureau Manager in New York. There he would cement his reputation by befriending many well-known socialites and international personalities. By 1969, he had decided to leave journalism behind in order to dedicate his full time to his passion: Drawings!
He often told the story that this passion was ignited by a 17th Century French drawing gifted to him by Jackie Onassis.
His passion was identifying the drawings origins and linking them to their creators and to the painting they served as preparatory work for.
His collection grew to more than 4000 thousand drawings, mostly from the French and Italian School. In 1987 he gifted the main part of his French Drawing collection, consisting of 3000 pieces, to the Ecole des Beaux Arts in Paris.
The remainder of his collection was dispersed at three main auctions: in 1988 in Paris, then again in 1989, and finally in 2018.

An incredible connoisseur he has marked the world of Drawings for years to come.