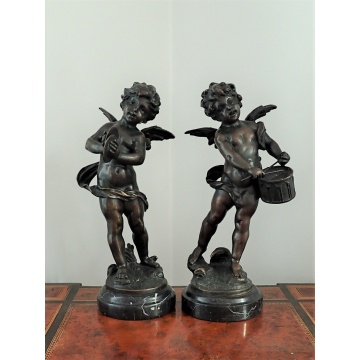 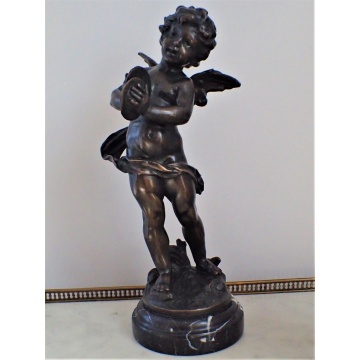 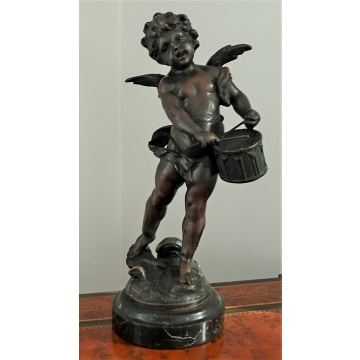 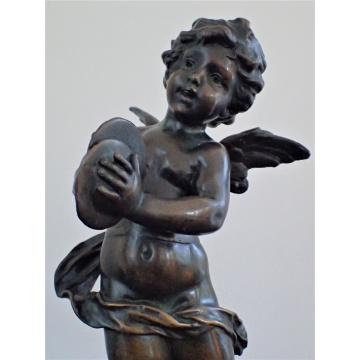 Standing on black and white marble pedestals, the two Bronze statues, show each a music instrument. One playing the cymbals while the other has a tambourine.
Their faces are lovely the ‘contraposto’ movement perfectly executed.

The Sculptors’ dynasty began with Jean Baptiste Louis Joseph Moreau in Dijon at the end on the 18th Century.
Jean Baptiste had 3 sons who followed in his footsteps, Hyppolyte François, Mathurin and Auguste.
After first apprenticing under their father’s they moved to Paris to follow Francois Jouffroy’s teachings at the Ecole des Beaux Arts. All three brothers soon became will known for their bronze statues and showcased their work at the Salon des Artistes Français and the Paris World Trade Fair.
Many of the three brother’s statues can be found in Paris, but also at the Art Museum of Dijon.
Auguste in turn had two sons, Louis Auguste (1855-1919) and Hyppolyte François known as François (1857-1930) , who naturally followed their elders footsteps and entered into a partnership under L & F MOREAU.
The brother were best known for their Bronze sculptures depicting Cherubs or putti, as well as their ornate clocks and garniture sets.
François (Hyppolyte François) was also a painter.
Both brothers produced statues on their own as well as jointly under their partnership L & F Moreau.

Each of the charming cherub shows the L&F MOREAU Mark on the side.
The patina is perfect!