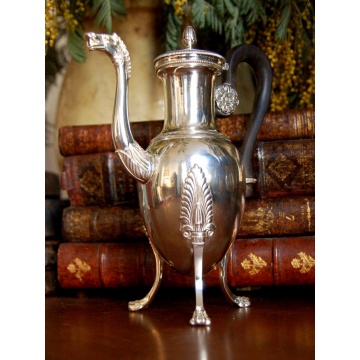 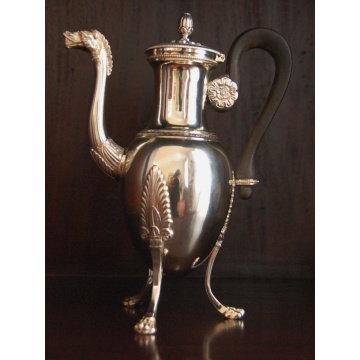 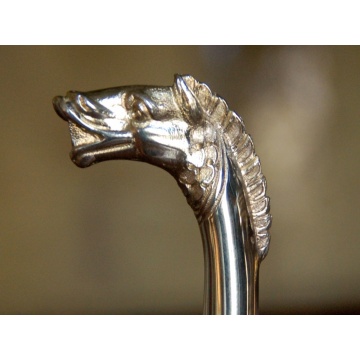 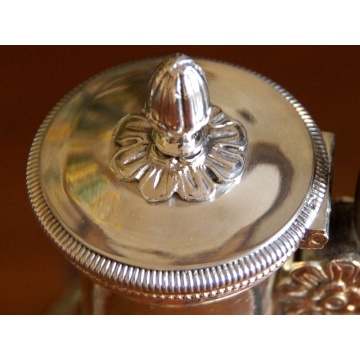 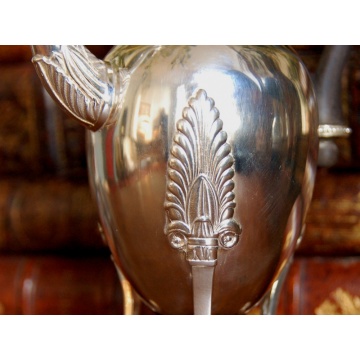 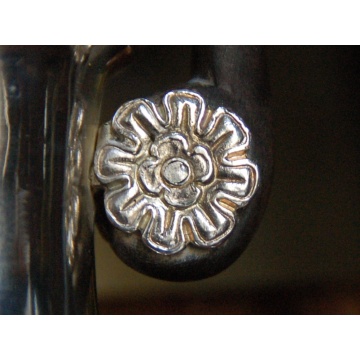 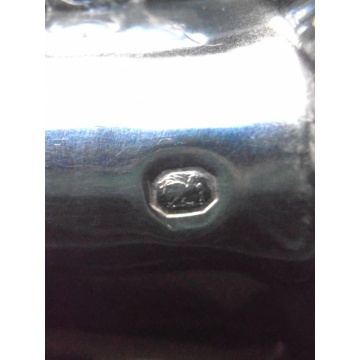 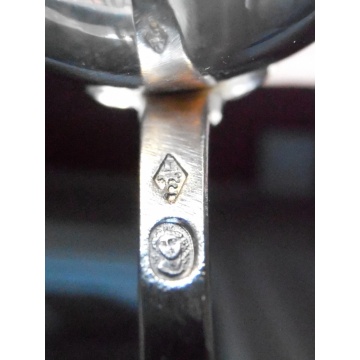 A Charming French Antique Silver ‘Selfish’ Coffee Pot in the very refined ‘Directory Style’ dating back to between 1809 and 1819, by Léonard CHATENET.
Later continued by the Empire Style, the Directory Style started right after the revolution, after years of struggles and loss of workmanship.

The designs were rather simple and elegant, with pure details and heralded the use of Antique symbols brought back by the French expedition in Egypt, and later heavily used in the Empire Style.
This lovely French Antique Silver Coffee Pot is called ‘Egoïste’ or Selfish in French as it holds roughly 5/4 Espressos or 2 larger coffees but no more! Hence the connotation of Selfish!

The design is extremely pure with the ebony handle fitting perfectly and giving a very clean line, while inked to the pot by a delicately silver peony on one end and a silver peral circle decorating the holding band on the other side.
The Spout is lovely, showcasing a ‘zoomorphic’ design representing a beautifully represented horse’s head. The bottom part of the spout is worked with an acanthus leaf design, floral scrolls and rosettes.
The Finial, or ‘Frétel’, is in the form of a nut, resting on a top of a peony flower, while the edges of the lid are carved with a delicate geometric fringe.
The body of the coffee pot showcases a wreath of laurel leaves.
The coffee pot rests on three feet extending in delicately carved lion’s paws.
The feet connect with the body of the pot with a lovely Palmetto design flanked by rosettes.
The little pot is in perfect condition, no marks or dents.

The Hallmark is Poincon Deuxieme Coq (or second rooster)1 -1st title (950/1000)- 1809 to 1819 – Paris
A wonderful detail for the collectors: The piece is marked with what is known as a ‘Head of Greek Women’ with the letter P on the left hand side.
This is a hallmark that was used during the Revolution between 1793 and 1794, which would mean that this might have been an earlier piece worked on in later years.

The Makers Maker shows an L and a C separated by a walking cat. The Mark is for Leonard CHATENET and was first registered on January 21st 1807 and cancelled on December 1st 1830.Chatenet also has a second mark showing a caduceus.
His offices were located 6 rue St Anne in Paris.