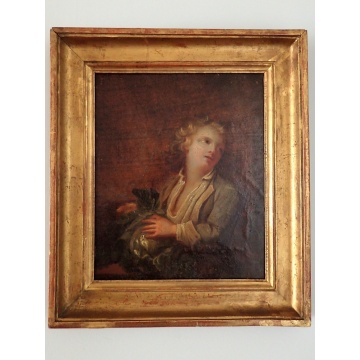 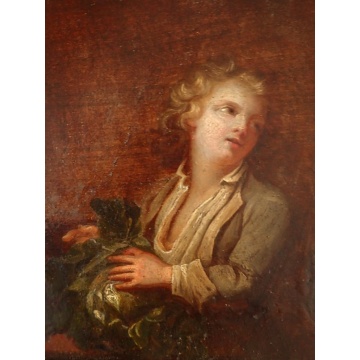 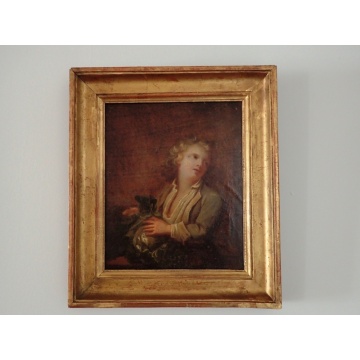 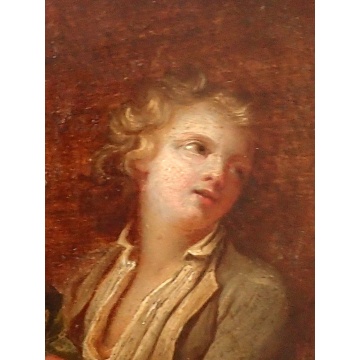 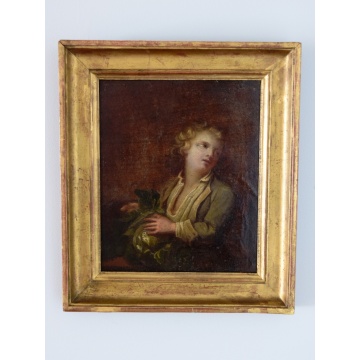 This lovely painting a finely dressed young man seeming to present a leafy cabbage to someone standing behind him.
The study is particularly focused on the expression of the young man or adolescent.
He gazes back with soulful eyes seeming intent of what is being said to him.
His face and hands still show the chubbiness of youth.

His clothes are typical the early 18th century and seem a little too refined to be those of a young cook or kitchen boy.
His light brown hair still holds the ringlets typical of the younger boys at the time.

The study is lovely with warm yet vibrant colors.
The frame is early 18th century gilt wood and in good shape.

We love the little note in the back that specifies that the piece was bought in 1935 by Paul Roussier at an Antique store located Rue Dupont des Loges because ‘he liked it’!
What better reason…?
Accidently Paul ROUSSIER (1882-1965) was a paleographer and Archivist for the ‘Ministère Des Colonies’ (or if you would rather the Secretary of the French Colonies)
One of his biggest achievements was to organize an International Convention in 1931 solely dedicated to Colonial History which he deemed essential when at that time it was considered a little importance…
A scholar he was one of the most versed into the original history of the Caribbean islands.
Above and beyond he was also considered a keen collector of Art.
Paul Roussier lived 8 rue Dupont des Loges in Paris, and seemed to have been a patron of the local ‘Antiquaire’.
It is always a little more interesting to us to pursue the ownership of the pieces we propose, it is always full of surprises!