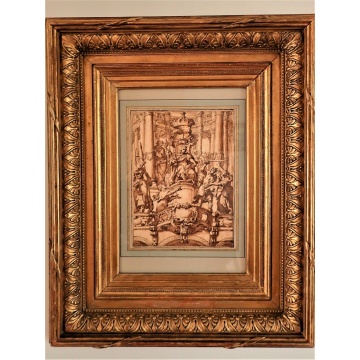 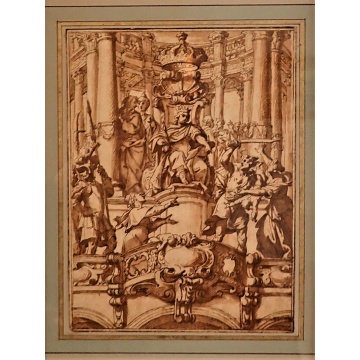 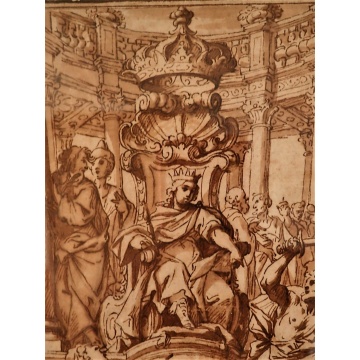 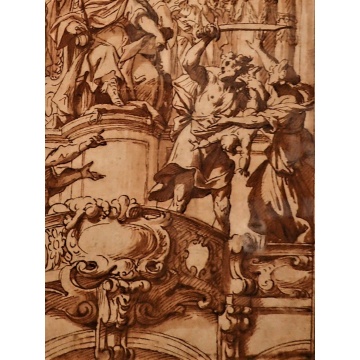 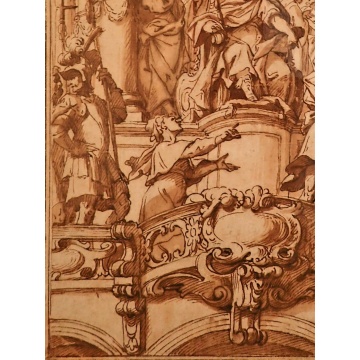 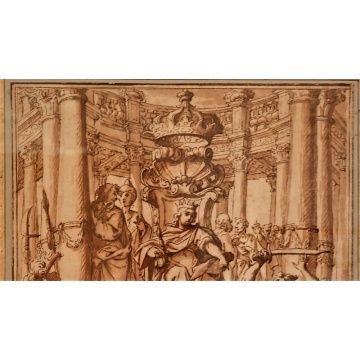 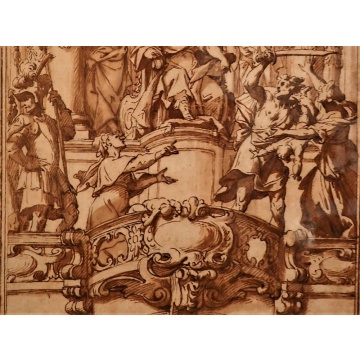 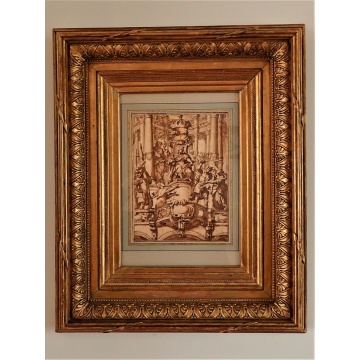 An absolutely beautiful rendition of the Biblical account found in Kings 3.
King Solomon, portrayed in a period attire sits in his palace under a seashell shaped canopy holding a Scepter in his right hand.
With his left hands he points while rendering his judgment.
The Palace main court is pictured around him with his subjects leaning in the colonnade, while the 2 women seeking his advice are on either part of his throne.
The drawing is typical of the early 17th Century Italian School of Siena.

The movements are beautifully executed and all figures are superbly rendered, the brown wash highlighting the beauty of the Ink strokes.

The Judgement Of Solomon recounts that two mothers living in the same house, each the mother of an infant son, came to King Solomon. One of the babies had been killed, and each claimed the remaining boy as her own. Calling for a sword, Solomon declared his judgment: the baby would be cut in two, each woman to receive half. One mother did not contest the ruling, declaring that if she could not have the baby then neither of them could, but the other begged Solomon, “Give the baby to her, just don’t kill him!”
The king declared the second woman the true mother, as a mother would even give up her baby if that was necessary to save its life. This judgment became known throughout all of Israel and was considered an example of profound wisdom.

Francesco VANNI (1563 or 64-1610), the leading Sienese painter at the turn of the seventeenth century, was an innovative religious iconographer, a gifted draftsman, and an occasional printmaker.
Most of Vanni’s paintings are large altarpieces, produced for churches in Siena, elsewhere in Tuscany, and Rome
In 2015 the exhibition Francesco Vanni: Art in Late Renaissance Siena, at the Yale University Art Gallery, came with an accompanying catalogue by John Marciari that provided an extensive examination of the artist’s works, focusing on his preparatory drawings for altarpieces, his three autograph etchings, and the many prints by other artists based on his designs.
Marciari’s essay provides an illuminating introduction to Vanni’s life and production as a religious painter, observing that although he lived in a city controlled by Medicean Florence, his works show more influence from Rome, Bologna, and the Marches than from Florence. Marciari speaks authoritatively of Vanni’s role in the Catholic Reformation, noting his associations with such key figures as Cesare Baronio and Federico Borromeo, the emphasis in his art on the new spirituality, and his connections to the Oratorian orbit as an early member of the Confraternity of the Sacro Chiodo, one of Siena’s forty-two confraternities. Vanni’s devotion to the Catholic reform is demonstrated by his concern with accurate iconography.
The Drawing though not signed was early on attributed to him. We continue to say attributed as no signature can be found.