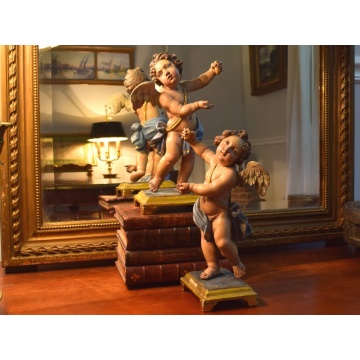 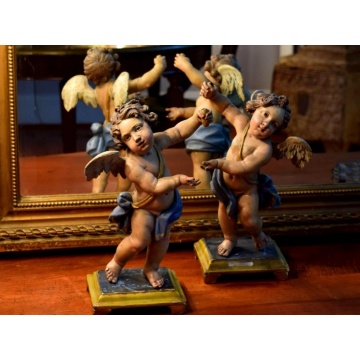 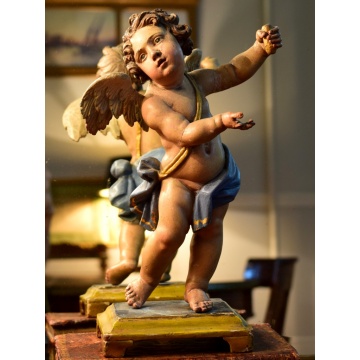 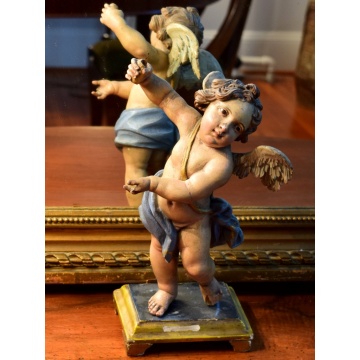 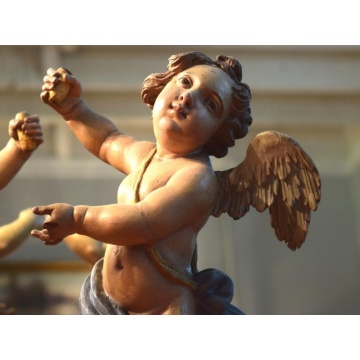 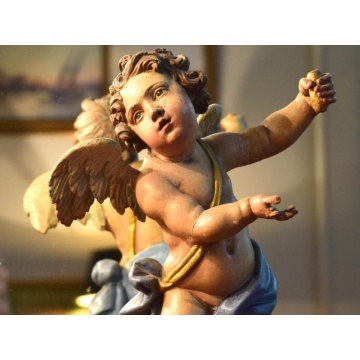 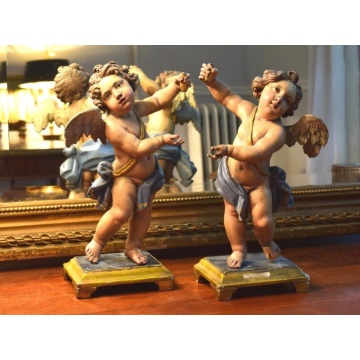 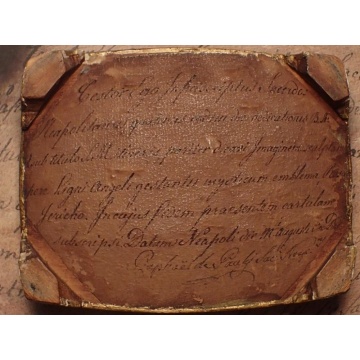 Exceptional Pair of XVII Century Putti from Neapolitan School.
This absolutely stunning pair was quite a find!
Still bearing their beautiful original colors they both stand at 11.2 inches high and are probably made out of Linden wood.
Made in the early 17th Century by a sculptor from the Napoli School, the two statues are painted with life like colors, which are still strikingly vivid.
A subtil ‘contrapposto’ or ‘Counterpose’, a barely there smile, their hair fixed in tousled waves, they offer a very light and airy composition presenting an esthetical ensemble directly inspired from the Renaissance, which, at the time, is just ending.

Their arms and legs are full of grace, while their wings are studies in lightness and balance.
The faces are particularly exquisite, with the glass eyes incredibly alive.
Glass eyes inserts were typical of XVII century religious statues in Naples.

They are in an overall excellent state though they do show some age signs; both are missing fingers and one of them is missing the end of its left foot.
They are also missing the objects they used to hold.

The Putto was originally inspired by the Greek and Roman Ancient Arts.
Symbolizing love the Putto would reappear during the Renaissance period and could be found up to the Baroque period.
Putti were usually represented as chubby young boy and often winged.

In the case of this extraordinary pair we have a little bonus to offer.
Both stands still show the handwritten manuscript dedicating them to a church and are signed by the priest who is dedicating them ‘Raphael De Pauly’.
With only a tiny difference in reference to the objects the two angels used to hold.

‘I underwritten Neapolitan Priest To the Same extent this day Dedicate B.M. on his title SM for his journey both wood sculpted Sacred Images Of Angels holding the Sacred Emblems of Jericho (or on the second Of the Healing Lilium). In Show (in Anticipation) of Faith I present these notes.
Signed and Dated Napoli Day of August?
‘Raphael De Pauly Sac.Neap.’