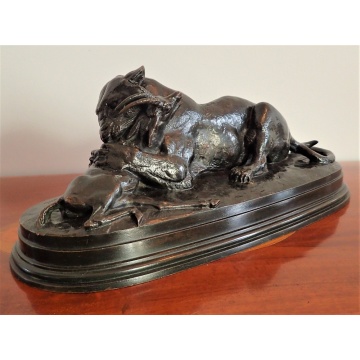 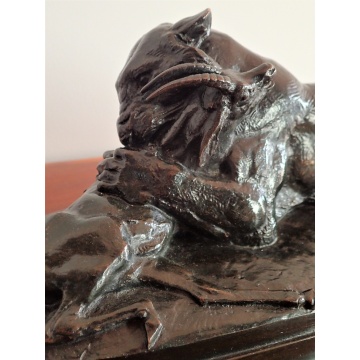 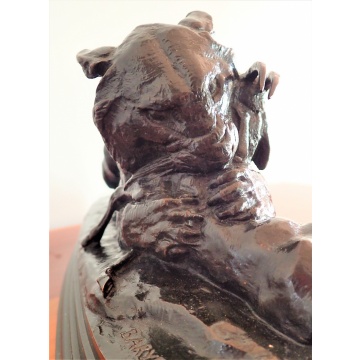 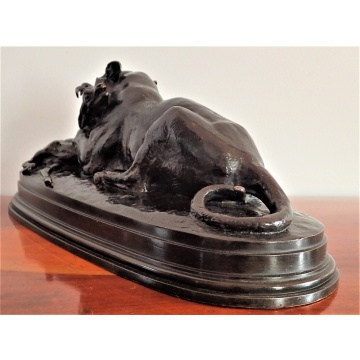 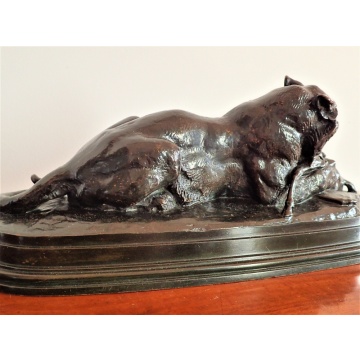 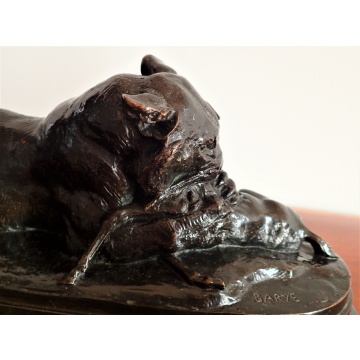 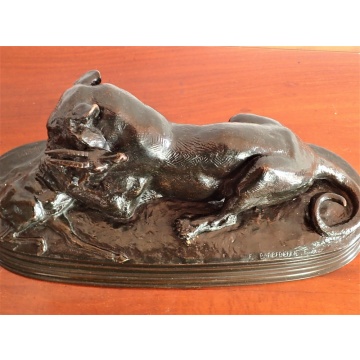 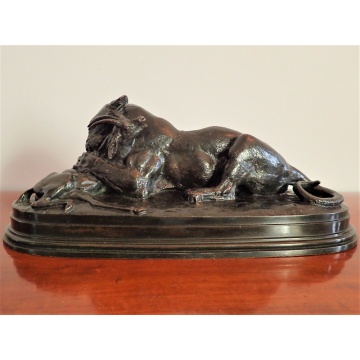 Gorgeous Bronze Statue of a Tiger Devouring A Gazelle by Antoine Louis BARYE.

The first edition of the incredible work was done in 1857 by Barye.
Our model is the ‘Seconde version’ as is referenced in the Poletti & Richarme ‘Barye Catalogue Raisonné des sculptures’, on page 208.
The original plaster model is currently part of the Fabius collection in Paris.

The sheer strength of the model is mesmerizing….the gazelle is particularly lovely and delicate, while the tiger’s study of muscles and expression are amazingly well rendered.
A true work of art…by the Artist that became known as the Master of the Animalier sculptors in 19th century Paris.

Barye was responsible for improving the status of animal sculpture, a category famous since antiquity, and for demonstrating its suitability as a modern expressive form. He also gained special fame as an artist who, regardless of subject matter, could meld grandeur and artistic refinement with realism in both public monuments and small-scale bronzes for the home.
While Barye excelled at sculpture, he often faced financial burdens due to his lack of business knowledge. In 1848 he was forced to declare bankruptcy, and all of his work and molds were sold to a foundry. By 1869 Barye no longer produced new works.
After Barye’s death (which occurred in June 1875) in 1876 what remained of Barye’s inventory, 125 models, were sold to the Ferdinand Barbedienne foundry. The 1877 Barbedienne catalogue offered all of the models in bronze in variable sizes, and the Barbedienne castings were of superb quality.
Barye also held a passion for the art of the Patina with which he infused his sculptures, becoming known for his research in colors. A code which Ferdinand Barbedienne, thoroughly reflected.

Our sculpture is signed BARYE on the terrace in the front of the right forward paw of the tiger.
The sculpture was edited by the Barbedienne Foundry and is signed ‘F.Barbedienne.Fondeur’ close to the tail of the tiger.
The Brown patina is gorgeous, full of details and nuances, while the chiseling is outstanding in its precision and beauty.
Under the terrace the model is marked TT,43. 1258

The Walters Art Museum in Baltimore holds 1 example of the sculpture.