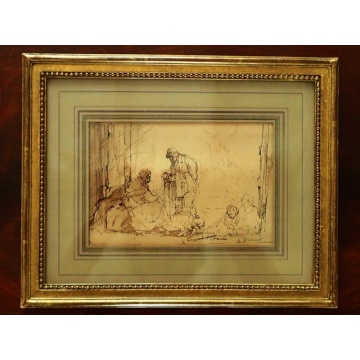 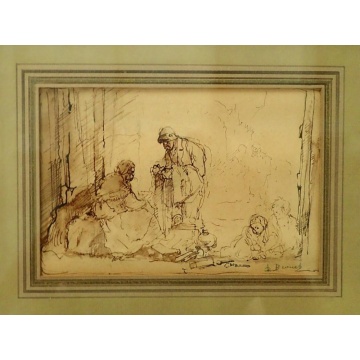 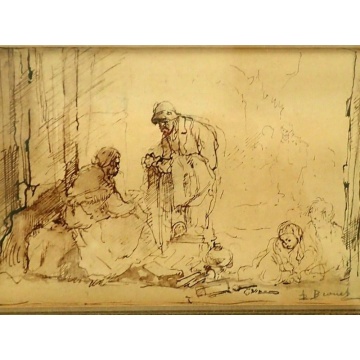 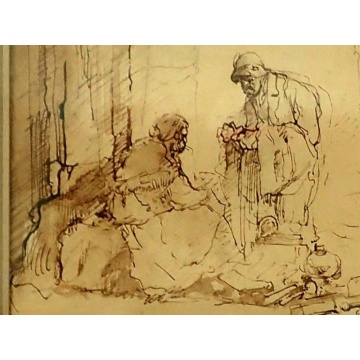 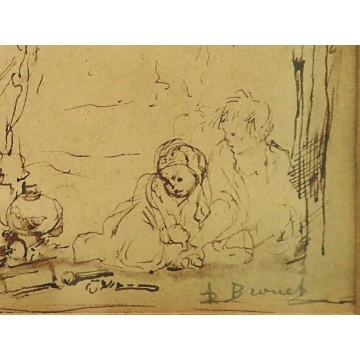 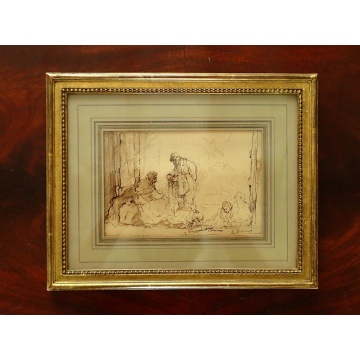 Late 19th Century Ink Drawing Of the Beggars By Brouet~Sold~

This little Drawing was done using only ink and ink wash on a lighter paper.
The drawing depicts a poor family seemingly living in a street, with two young children that are cowering from the cold.
The woman sits with a shawl on her shoulders, while the man shows her a blanket.
The scene is typical of the poor population of Paris at the End on the 19th century.
Though sad the portraits are masterfully done capturing the distress the poorer population was subjected to.

Brouet took inspiration from the exiled population fleeing war and famin between the 1890s and the First World War.

A printmaker and illustrator, Auguste BROUET, was born to indigent parents living in Montmartre, the artistic quarter of Paris on October 10, 1872 and he remained in Paris his entire life. He was apprenticed first to a lithographic printer and then to a lute maker but between the ages of thirteen and fifteen he attended evening classes in drawing soon showing great talent!
Brouet entered the École des Beaux-Arts at the age of sixteen years old studying first at atelier Élie Delaunay and then with Auguste Delâtre, the master printer who introduced him to printmaking.
His first etchings were copies of works by Turner, Corot, Chardin and Whistler.
Brouet went on to create over 300 etchings and drypoints recording the people and places of Montmartre, the circus, and the soldiers of World War and the poorer populatiion of the capital.

He is considered to be one of the finest original etchers of early twentieth century French Art.

French art critic / author Marcel Valotaire wrote the following in his essay on Brouet’s etching in the July, 1920 issue of The International Studio: vol LXXI, No. 280 :

“At the age of sixteen he made his first attempt at etching, using as his sole implement a nail, and as his plate a scrap of zinc gutter-pipe with a ground— if one may so call it—of floor polish. The proof obtained from a single biting of this little plate, Les petits Joueurs de Dis, is quite remarkable, and arrests attention because it immediately reminds one of Rembrandt, although at that time the youthful debutant was completely unaware of the great Dutch master’s existence as an etcher, and certainly had never seen one of his etchings. Thus from this early beginning as an aquafortist, Brouet has remained himself, and his manner and style are borrowed from no one, but are peculiarly his own….”

Auguste Brouet has a peculiar way of engraving, often using women’s watch strings which he though better to any other mean.
Auguste Brouet passed away in 1941 in Paris head had become blind due to his tedious work.

The frame is gilt wood, late 19th century and in fine condition.
The Ink drawing is signed in pencil on the lower right hand side.