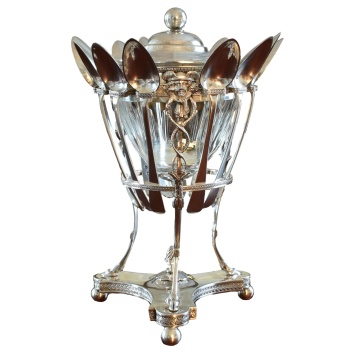 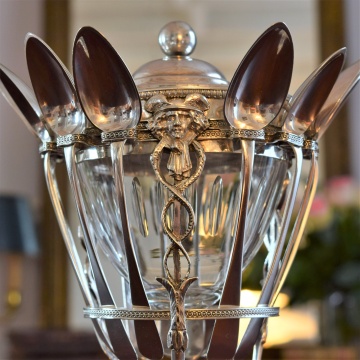 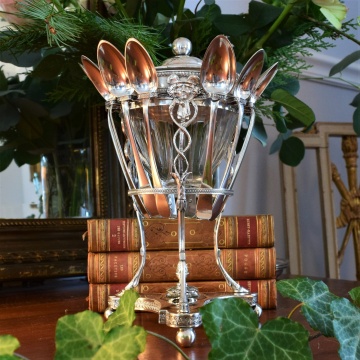 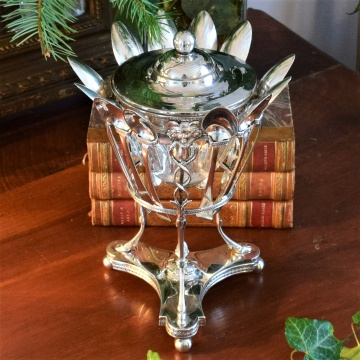 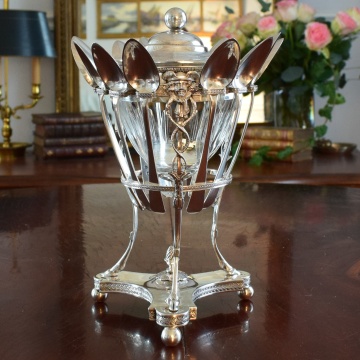 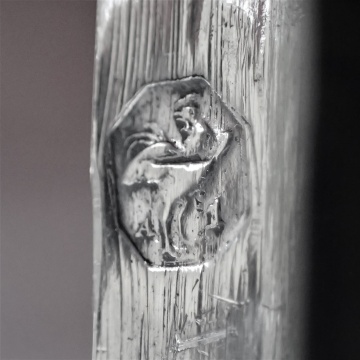 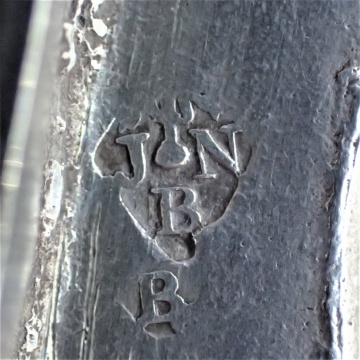 In France we call them ‘Drageoir’ or ‘Confiturier’ – But the only official name is a ‘Confiturier’ (Hence a Jam container), and it turns out that originally, they were only thought of and used as Ceremonial Sugar Bowls.

This delicate piece is decorated in the Louis XVI Style.
The upper register shows three Mercury Heads topping the three delicate pillar that form the tripod.
The legend says that Apollo exchanged with his half-brother Hermes (Mercury for the Romans) a golden rod against a lyre. Hermes uses it one day to separate two snakes fighting, which wrapped themselves around the stick in the opposite direction.
The representation of this stick with entwined snakes topped by two wings symbolizes the speed of Hermes, messenger to the gods.

The curved pillars end with deer hooves and rest on a triangular base lined with delicate acanthus leaves resting on silver pearls.
The base has a lovely pinecone rising out of an acanthus crown.
The lid which is slightly domed, and topped by a silver pearl.
The interior is in wheel cut crystal.
The spoons as usual for this period are by another maker a Spoon Maker under the name of Jean Louis Hardy or Hardi who registered his Mark in 1806.

The Hallmark is Coq de l’An V or Rooster Year V- A Mark used right between 1797 and 1798 before the new system of Marks became the norm.
But it also shows the 1st Jeanette Mark for the Association of the Goldsmiths used from 1794 to 1797 before the Marks were allowed once again after the end of the French Revolution.
It shows the head of a woman with a 1 on her right-hand side.
This piece was hence started between 1794 and 1797 and was finished by 1798.

The Makers Mark is for Maître Orfèvre Jean Nicolas Boulanger.
This is his second Mark. His first Mark was registered in 1783.
The second Mark shown here was registered after the End of the French Revolution and shows a JNB topped by a ‘pestle’. This mark was created in 1798.
His workshop were located 9 Cour Neuf du Palais in Paris.