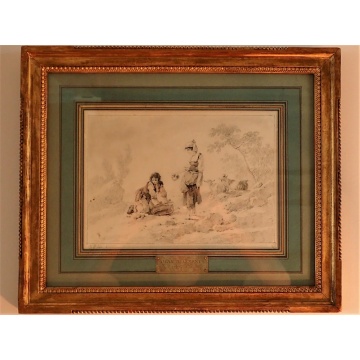 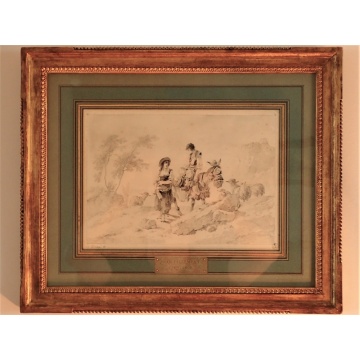 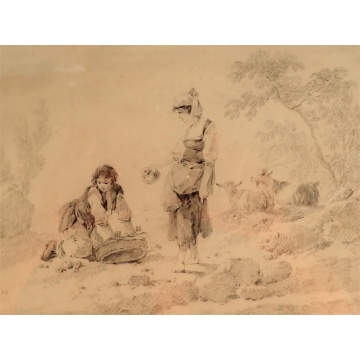 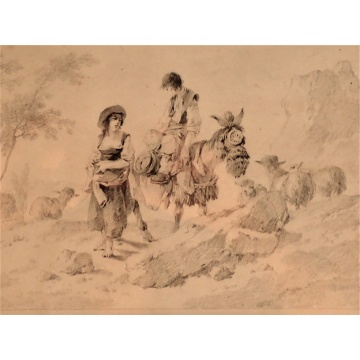 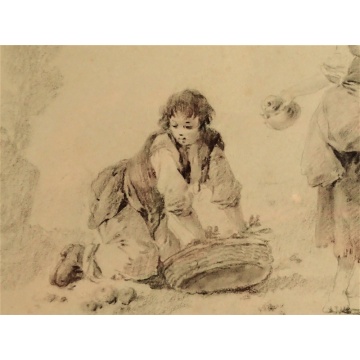 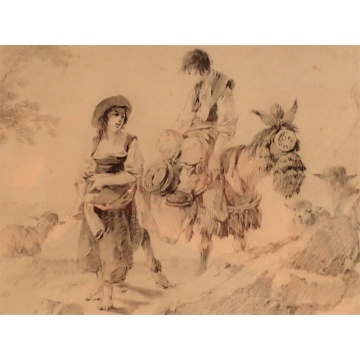 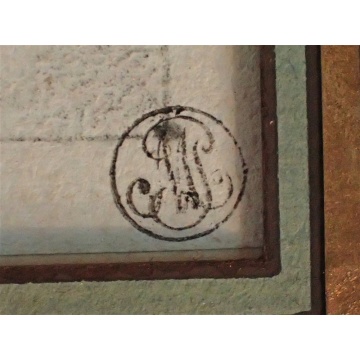 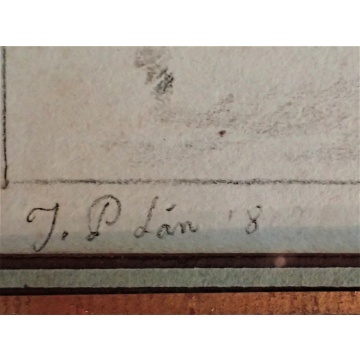 The pair is framed in identical gilt wood frames which are lovely.
Both drawings are signed by Pillement on the left hand side, with a date showing as L’an 8 but as it is faded we are hesitating with 1803 or 1805…
Both drawings are also stamped by Marius Plame’s Collector Stamp on the right hand side, registered under Lugt 1910, in Fritz Lugt repertory of collector’s marks.

The first of the two drawings shows a young couple of goat herders with an apple basket.
The second drawing shows them with the young man riding a donkey.

The animals are beautifully drawn, extremely lively and delicately rendered.
Both the young woman and the goat herder are perfectly pictured, rendered life like by their captured movements and in period garb.

Jean-Baptiste Pillement (24 May 1728 – 26 April 1808) was a painter and designer, known for his exquisite and delicate landscapes, and whose importance lies primarily in the engravings done after his drawings, and their influence in spreading the Rocaille or Rococo style and particularly the taste for Chinoiserie throughout Europe.
Pillement had an unusually cosmopolitan career. He was born and died in Lyon. In 1743, at the age of 15, he moved from Lyon to Paris where he was employed as an apprentice designer at the Gobelin factory. In 1745 he left for Spain, where he remained for 5 years.
There he found employment in various cities as both a designer and painter. A landscape dated 1748 reveals rustic themes he was to repeat often: sun bathed shepherds leading their goats and sheep to a cascading stream, a water mill, rocky elevations covered in lush vegetation, or animals depicted grazing in on hilly mountainsides.. In 1750, at the age of 22, he moved to Lisbon and onwards to London by 1754.
Pillement then spent eight years in England, fully exploiting the English taste for landscapes. In 1763 he traveled to Vienna , then Poland and St Petersburg returning to France in 1768 where later he would work for Marie Antoinette at the Petit Trianon.
He returned to Lyon in 1800 staying there until his death in 1808.

As mentioned above both drawings are marked with Marius PAULME’s collector stamp.
Born in 1863, studied at the Ecole des Beaux Arts, before starting a career as an ‘Expert’ in drawings and paintings as well as Fine Arts in Paris.
Starting 1885 he formed an incredible collection of French Old Masters as well as a few Dutch and Italian drawings from the 17th and 18th century.
Marius PAULME Formed a partnership with the 2 Lasquin brothers, and managed many of the Hotel Drouot main dispersion of Old Masters Collections.
His opinion and taste became leading in the field and he advised many of the 18th century collectors in their acquisitions.
Conveniently.., he married Ms Barjot, the daughter of a well known Art Dealer.
His collection was astounding, including drawings by Fragonard, Demachy, Jean Baptiste Huet, J Lemoine, Moreau L’Aine, Hubert Robert, Tipolo, Vigee Lebrun, Watteau to name a few, and of course Jean Baptiste Pillement.
Upon his passing in 1928 his main collection was dispersed at the Galerie Georges Petit. With the remainder kept by Mrs Paulme until her passing.
Two more auctions were held subsequently, at the Galerie Charpentier and then at Drouot.

They were acquired in Paris in March 2019.