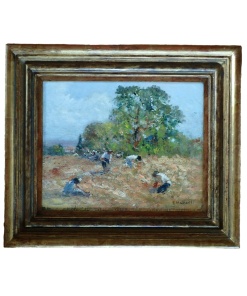 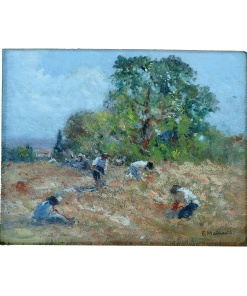 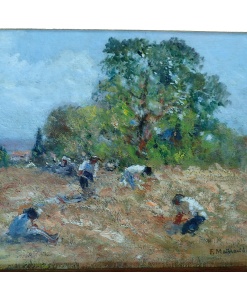 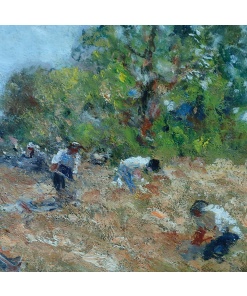 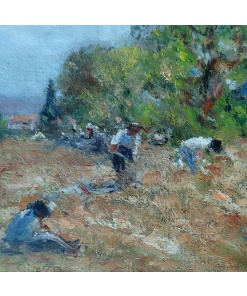 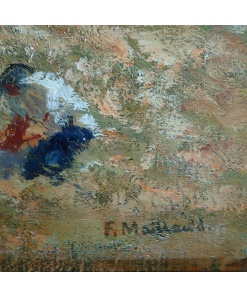 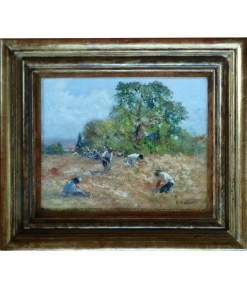 Oil On Canvas Painting Of The Harvest By Fernand Maillaud

A Lively Oil on Canvas painting of The Harvest by French painter Fernand Maillaud.

Fernand Maillaud was born on December 12, 1862, in Mouhet in the Indre region.
Though coming from a modest family, his father was a carpenter and his mother a teacher, he developed an aptitude for drawing at a very young age.
In 1878, his father falling ill, he had to seek work as a clerk in a store, then in Paris in several department stores.
In 1886 he married a young seamstress and enrolled in the Ecole des Beaux Arts.
Times were hard, but Fernand persisted in drawing and painting.
He also befriended a group of impressionist artists formed by Paul Gauguin.

Though continuing to work, study and paint, Fernand often returned to the land of his childhood and to the Creuse Valley.
It is from his birthplace that he drew his inspiration of the ‘Rural world’ treated with an impressionist touch.
The representation of the countryside was for him the ultimate inspiration, with the landscape animated by the work of men and the animals that accompanied them.

He started to participate in the Salon des Artistes Français in 1896 and sent works throughout his career, and was rewarded by a gold medal.
His acquaintances introduced him to Ferdinand Humbert, then a very influential painter, who allowed him to receive state commissions.
Now free of material worries, Fernand devoted himself to his career, painting, exhibiting and selling.
His work was, at last, present in the most prestigious Parisian galleries (Georges, Petit, Bernheim Jeune, Durand Ruel…) but also in prestigious exhibitions abroad (New-York, Seattle, Buenos-Aires, Rio de Janeiro, Montevideo, Oran, Algiers).

He was made an officer of the Legion of Honor in 1947 and died in Paris in 1948.
He is represented in more than 30 museums, both abroad and in France, including the Carnavalet Museum, the Orsay Museum, the Petit Palais…

Our work is representative of the aspirations of the Painter, a rural scene, as was dear to him.
These men and women are in full effort, and represent the daily life of the countryside at the end of the 19th century and the beginning of the 20th, with not a day of rest; a tedious daily work for simple survival.
The scenes is however awarded a certain serenity due to the mildness of the climate.

Treated with his impressionist touch, in short brush strokes, pure colors, a significant impasto to accentuate the effect of relief, this painting is the perfect example of the work that made the success of Fernand Maillaud.
This oil on canvas mounted on cardboard is signed at the bottom right.
Measuring 13 X 16 inches, it is presented in a gilded wooden frame measuring 20 X 23 inches.