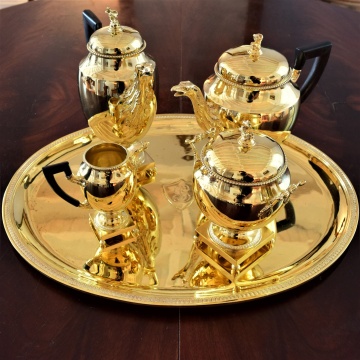 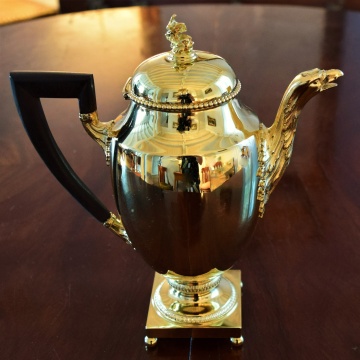 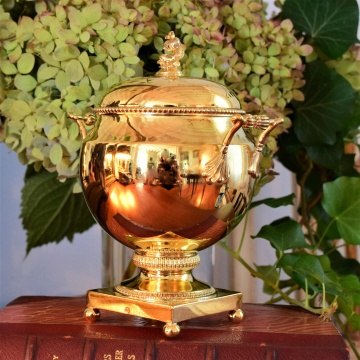 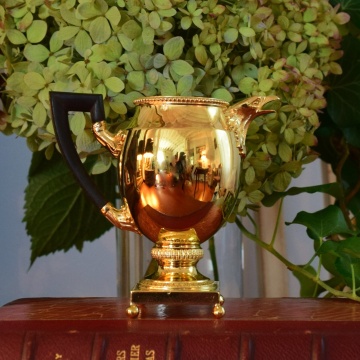 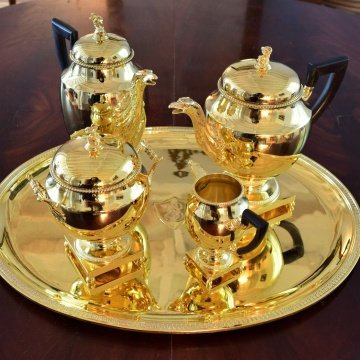 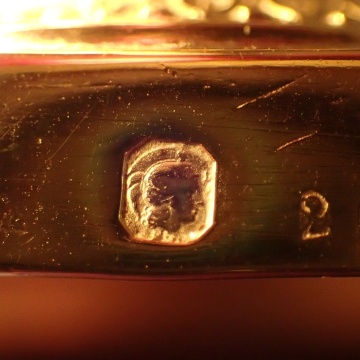 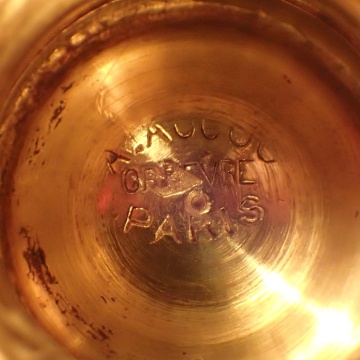 The set, done in the Empire Style is in solid silver and has an 24 carat gold wash which is in great condition.

It is an incredible work of art and shows a refinement few Master Silversmiths managed to attain…
Here the whole head including the neck and feathers is used to re create the spout in a gorgeous and very detailed way!

The set consists of a Coffee Pot, a Teapot, an adorable matching Creamer, and the lovely matching Sugar Casket.
The pedestal of the four pieces are decorated with exquisite wreaths of laurel leaves and gilt silver pearls on the upper part.
The coffee and tea pots as well as the creamer, all sport the amazing eagle head spouts!
The handles are linked by beautifully carved Acanthus leaves.

The Finials, or ‘Frétel’, are just beautiful! They all have a Dolphin carved in ‘ronde bosse’.
The décor is truly a celebration of the Empire Style.
The platter is also in solid silver making it quite rare.
It is wonderful to find a complete set, hence the rarity of this one.

The Makers Mark is for André AUCOC.
His first Mark was registered 1887 and cancelled in 1911.

The mark deserves a little more explanation’s as it was one of the most outstanding amongst the French Master Silversmiths.
Casimir AUCOC first registered his mark in 1821, and founded the company at 154 rue Saint Honoré. The company then moved in 1835 to 6 rue de la Paix, where it stayed until 1936.
From 1836 to 1856 it was managed by Jean Baptiste AUCOC who had taken over from his father.
He was later followed by Louis AUCOC who took over starting 1856, before handing the management of the company to André AUCOC in 1887.
The company was famous for its outstanding larger pieces which beautifully and expertly reproduced the styles of the past centuries.
In 1839 it obtained its first silver medal in one of the first versions of the Universal Exposition to be held in Paris.
It continued collecting medals in 1844, then 1855 and 1867 at the Paris Universal Exposition.
Under André AUCOC the company took home the Gold medal in 1889 and 1900 and was one of the laureate at the Louisiana Purchase Exposition (more commonly known as the St Louis World Fair) in 1904 in Missouri!