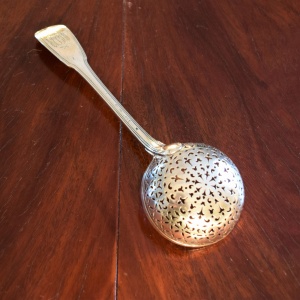 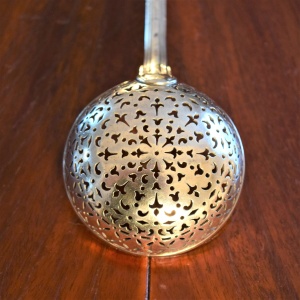 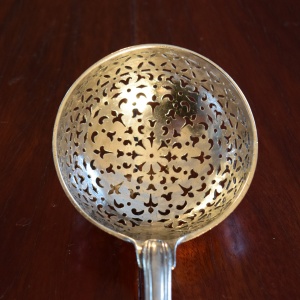 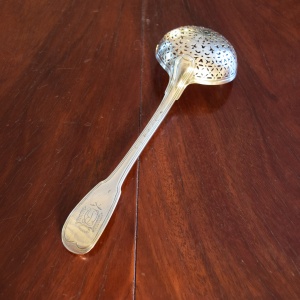 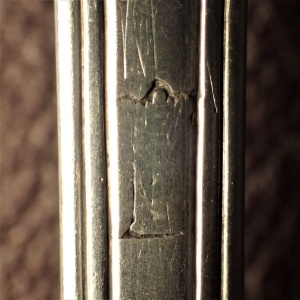 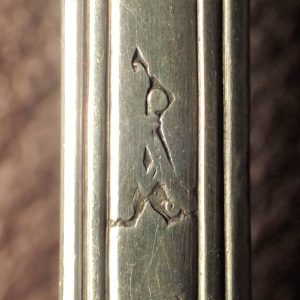 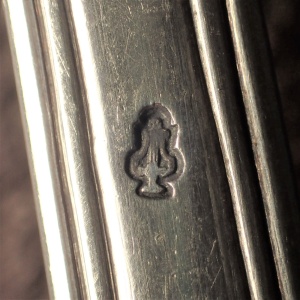 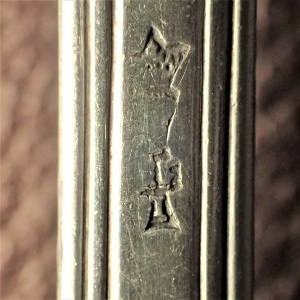 An Extremely Rare 18th Century French Silver Sugar Sifter Spoon by Maître Orfèvre Jean François Jobart from the City of Valognes, under the Jurisdiction of Caen in Normandie.

The bowl of the spoon is an extremely rare and only found in the Provinces design.
Resembling the rose windows in the 12th Century Churches this beautiful cut out design is quite unique.
The end of the handle shows a simple double line.

The work is lovely and the piece is in very good condition.
The handle bears a RO monogram.
The model is rare to come by and absolutely lovely.

The Hallmarks are under the Fermiers Généraux régime (the Old Regime) for the city of Valognes who was under the Jurisdiction of Caen:
Photo # 5:
Though very erased the Mark is a Crowned E for the Maison Commune of Valognes for the Years 1730 to 1731

Photo # 7:
Is a Mark recognizing an Old Work ( Vieux Ouvrages) for Paris 1783. Meaning that in 1783 the initials on the Spoon were probably added in Paris.

Photo # 8:
You have the Makers Mark for Jean François Jobart (Father) showing his initials topped by a crown over a sheaf of Wheat.
Jobart was born in 1681 in Port Louis, he started apprenticing under his uncles in 1699 for a duration of 9 years, then under other Masters in Cherbourg and Paris.
He is received Master on July 30th 1711.
He passed away on December 31st 1757.